Why You Should Put As Much Money As Possible In The TDA. 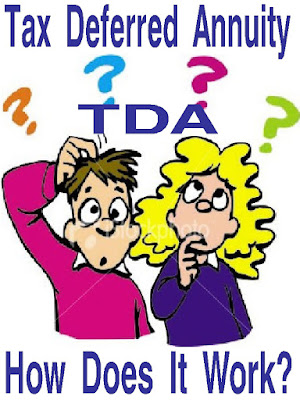 One of the greatest perks we have as UFT members is the Tax Deferred Annuity (TDA).  How good is our TDA?  Well, most Financial Advisors, are shocked and jealous that the Fixed Income Option pays a guaranteed 7% return on the TDA principal (non UFT members in the DOE receive 8.25%).  With historically low interests rates (1%) and banks and money markets struggling to give 0.25% on short-term funds and 1% for longer term treasures like CD's, the TDA's 7% interest rate is an unbelievable windfall for UFT members. Even the Citizens Budget Commission (CBC), a conservative watchdog group has complained about it.

According to the CBC report there are 137,000 participants in the TDA (this includes CSA, DOE, and UFT) with 51,000 being retirees while only 3,000 of them are currently drawing income from the TDA.  The 3,000 figure is hard to believe since most of the retirees I know either take a percentage of their TDA or annualized it.  Furthermore, at 70.5 years of age the retirees must take the Required Minimum Distribution (RMD) from their TDA.  I must assume they are talking about the TDA principal and not the total TDA amount.

Because the TDA fixed income option is giving participants an effective interest rate of 6% over present day inflation, its no wonder that 60% of all TDA funds are in the fixed income fund.  Moreover, as of last year, the average TDA member had $325,000 socked away at retirement.  At 7%, this generated a yearly return of $22,750 without touching the TDA principal.  Quite a chunk of change to add to your average yearly pension of $45,000.

Combine the generous interest rate of 7% with the fact that for New York State residents, the TDA pays no State or City tax and the 7% windfall is effectively a tremendous tax haven to shelter income from the State and Local tax agencies. Moreover, since the TDA is tax deferred, no federal taxes are paid until you start withdrawing it at retirement and only that amount you actually withdraw or forced to by the RMD.

My recommendation is contribute to the TDA as much as possible as it reduces your taxable income, exempt from State and Local taxes on withdrawal if you reside in New York State, and take advantage of the 7% interest rate that the Fixed Income Fund gives you. in our low interest rate environment.
Posted by Chaz at 4:23 PM

Hi Chaz. When can you actually start withdrawing from your TDA? Is there a specific age? Must I be retired? I would like to retire in 10 years but I will only be 52 then. That TDA money will sure help me out a lot!!

QUESTION: I too read the NY Post newspaper today bashing the fact that we have an awesome TDA with a 7% return. If the city wanted to change it, would it only affect new hires? I have been putting a good chunk of my salary into my TDA for quite a while and am a tad frightened that it might be game over once the "secret" gets out.

OMG.... love this post! Question: when we retire (25/55) can I defer withdrawal &/or rollovers. Meaning, I want to leave my money in the NYC TRS Account earning the 7% (assuming this rate stays the same). Or do I have to take it out when I retire? I know I have to start taking the RMD.... but until then or even afterwards can I leave there? Also, say I don't make it until 22/55... can i leave the money in there until 59 1/2. Your thoughts....
Thanks!

You cannot withdraw your TDA money until you're 55. Otherwise there would be a 20% penalty. 10% for early withdrawal and 10% if it does not go directly into another tax deferred plan.

Theoretically, the State legislator could change it but as long as the Democrats hold the Assembly, this is highly unlikely. A possibility, would be a new Tier VII that could affect new hires and reduce the 7% for their TDA to something less.

You can leave the TDA money in as long as the RMD withdrawal date of 70.5 of age and that would only be 3.65% of your total TDA amount.

I have a question about this: “...either take a percentage of their TDA or annualized it…”

I know you can make it an annuity, but what do you mean by take a percentage?

Once again all points to go Chaz! Best NYC blog for teachers out there. (First blog I check at 5:00am when I get up to get ready to teach in the Bronx) You are a hero to every "in the know" teacher in our great city. Keep up the awesome work.

Don't forget about your taking a $50,000 tax deferred loan from your TDA.

Very nice for a down payment on a crib.

That is you can take any amount you choose yearly.

Better to take a loan from your QPP than the TDA.

Sorry Chaz, always was told you can withdraw from TDA until you're 59 1/2. I read your earlier response of 55. You sure on the 55?

From TRS' TDA Program Summary: Since the TDA Program is designed as a retirement
plan, the IRS places restrictions on withdrawals
before retirement.
√ If you have reached age 59½, or have separated
from service, you have unrestricted access to your
TDA funds.
√ If you are an in-service member who has not
reached age 59½, you may withdraw Pre-1989
funds (i.e., TDA contributions and earnings
accumulated as of December 31, 1988) at any time.

The article states that only 3000 retirees are withdrawing from their TDA accounts. What could happen when all baby boomers are forced to withdraw the MRD from their retirement accounts.

1) In the U.S. there is over $25 Trillion in retirement accounts and growing.
2) The oldest baby boomers begin to turn 70 1/2 as of July, 2016.
3) These baby boomers will be required to withdraw a minimum required distribution (MRD) from these accounts this year, 2016.
4) The funds withdrawn will be federally taxed providing a windfall for the federal government for decades to come with the excess spent, donated, gifted to children and grandchildren, or reinvested elsewhere providing some economic stimulus to our economy.
5) The baby boomer taxpayers required to withdraw funds that have been sitting in tax sheltered retirement accounts for decades will now begin paying federal taxes on the MRD money. This will result in some help in regard to reducing the national debt.
6) A side benefit of the massive retirement of baby boomers is that millions of jobs will become available to the younger generation. Look for labor shortages in many specific skill areas.
All of the above is only an opinion.

This is on the UFt website but nothing done by DOE as of yet counselors are still rotating i guess. Someone mentioned to me today that somewhere somehow someone is making money on the ATR pool and that is why it still exists!!

WHEREAS, there are UFT Guidance Counselors and Social Workers in the ATR pool; and

WHEREAS, the Department of Education rotates those Guidance Counselors and Social Workers each month; and

WHEREAS, schools have counseling and social work needs, but these require professionals who are assigned for a longer period of time; and

WHEREAS, the United Federation of Teachers values the dignity of all our members; therefore

WHEREAS, the United Federation of Teachers have consistently argued to the Department of Education that the current rotation system is not appropriate for Guidance Counselors and Social Workers due to the nature of their work and have advocated for assignments to schools for longer periods of time such that they can be a tremendous benefit to the schools and students of New York City; be it

RESOLVED that the United Federation of Teachers will work with the Department of Education to change the rotation system so that Guidance Counselors and Social Workers in the ATR pool will be assigned to schools for a sufficient period so that they can continue to serve the children of NYC.

PLEASE READ Gary Rubinsteins blog regarding "Ptech" and I guarantee you a jolly laugh. Then come back and read my comment!

Joel Klein is the devil in disguise and he uses the satanic ny post newspaper to get his evil thoughts out to people. The fact that the "P Tech" myth has been debunked is hysterical to me as I cannot stop laughing as I read the article here published by a true genius In Mr. Rubenstein. It is truly sickening that people like Joel Klein are such douche bags in that they are so self absorbed in their own useless existence that they will say anything to make them look like the messiah here on earth. When Klein was chancellor of NYC schools, he created a devilish environment and any NYC educator will tell you that Joel Klein was not disliked, no that is too simple,.,,,,he was truly hated by every single educator in NYC and if you can find me a single person at the NYCDOE who works in the schools who differs from what I am writing about here, please post it. Otherwise all other readers need to really hear it about Joel Klein who very well might be the devil in disguise here on earth.

I'm new to this blog, and I'm impressed by its content. I'm in my 33 year, and hope to retire at the end of this year (although I said the same thing last year). In response to Anonymous 8:27, I can definitely 100% tell you that as long as you are retired at age 55 you are able to withdraw from your TDA without penalties. 59.5 is the age at which in-service members can withdraw w/o penalty. It took me a while to believe this one for myself, but after going to a pension clinic, and speaking to a few UFT pension consultants, I was convinced!

It's surprising that only 3000 members take a distribution from their tda. Why wait till 70? No guarantee you will be alive! Lol

You are correct. For the TDA it's 55 for retirees and 59.5 for in-service members

I agree. Something is not right about the 3,000 figure that came from theIndependent Budget Office.,

Is it better to take a loan from my QPP or TDA? It seems the TDA would be the wiser decision since you are paying interest back to yourself. So even if you take out a loan over 10 years at the end of that time your TDA will have the same amount as it would had you not taken a loan. On the other hand, for a loan against your pension you are not paying the interest back to yourself so that is lost money.

That is how I interpret it. Please let me know if I am correct.

I really impressed after read this because of some quality work and informative thoughts . I just wanna say thanks for the writer and wish you all the best for coming!. convert currency