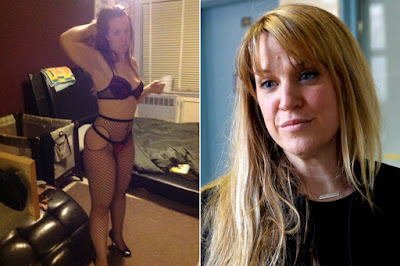 Back in  April of 2014, Principal Annie Schmutz Seifullah of Robert Wagner Secondary School in Queens was removed as a Principal for allegedly sexting on her DOE laptop and cell phone.  According to the Post article, she had sexually suggestive and racy pictures of herself, including alleged sex acts  Moreover, there were emails that she had oral sex with a visiting assistant principal and a school safety officer, at the school.  Finally, she sent damming emails to a high ranking DOE official.On May 1, 2014 she was demoted back to a teacher,

The following week, the visiting assistant principal, Danny Velezquez of PS 5 in the Bronx was also reassigned away from his school.  According to the New York Post article, Ms. Annie Schumutz Seifullah claimed she never had sex in the school with any of the men and that her ex lover, the PTA President, lied

Despite supposingly being reassigned away from students, Ms. Annie Schumuiz Seifullah resurfaced as a teacher at Automotive High School in Brooklyn but soon fled the classroom when the students googled her and read all the racy stuff about her.  The DOE tried to claim it was a mistake  However, the New York Post quoited a source who said the following:

“Principal Lafergola would not go to the bathroom without checking with Aimee Horowitz,” the source said. “This was not an error. This was cronyism pure and simple — at the highest level.”

After, Ms. Annie Schumutz Schullah fled the classroom the DOE decided to file 3020-a charges.

Surprisingly, the Special Commissioner of Investigations (SCI) decided that Ms. Annie Schumutz Seifullah's actions were not serious enough for them and the investigation was sent to the DOE's Office of Special Investigations (OSI) who, despite two men claiming she had sex at the school (her ex lover, and the DOE official) , incredibly found that their was no substantiation of her having sex in school. Go figure!

Just before her 3020-a termination hearing was to start, Ms. Annie Schumutz Seifullah took a six month medical leave that was due to her fleeing the Automotive High School classroom caused by the harassment.  There was no indication if this was a paid or unpaid leave, according to the New York Post article.

What might be the end of this sad saga, on December 1st, the 3020-a arbitrator suspended Ms. Annie Schumultz Seiullah  for a year, primarily for her sexting on a DOE cellphone and photos on the DOE laptop,  Interestingly, Ms. Annie Schumutz Seifullah did not testify and the reason the arbitrator gave her the one year suspension.

Note:  Te Daily News has a slightly more sympathetic article and she intends to appeal her one year suspension

So she is suspended for a year starting now? When and if she comes back she will land in the ATR pool?

What does it take for an admin to be terminated? This is outrageous!

Who would want this thing around students ever!

Well the best remedy for this situation would have been to make her the UFT President.

Seriously though, she needs to change her name.

Really, I was thinking the exact same thing... What crazed God of Synchronicity has such alleged smutty being behavior performed my a Ms. Schmitz ("Dirt")?

The Gods may be cruel, but at least they have a sense of humor...

I was an ATR at her school while she was the principal. I am saddened to hear of what happened to her, which I consider the manifestation of a psychological problem. She was one of the few principals who was truly welcoming to ATRs and treated us very well. She even handed us little baskets of treats around this time of year as a holiday gift. I am not defending her bizarre behavior with men, and I am appalled that TEACHERS would be terminated at even a false rumor of what she actually did, yet she, as admin, was not. It just goes to show you how totally corrupt and bizarrely skewed the DOE is. Ditto Howard Kwait, a former AP at Transit Tech HS (whose sexual performance was broadcast live all over the school as he did not check the Privacy button before ravishing a teacher in a vacant classroom), and our own Michael Mulgrew, etc. All engaged in sexual activities at their respective schools. Does anyone know if Michael Mulgrew faced charges for that?

I don't get it? Seems like she really did noting too bad. Someone stole her computer and put naked pics of her on it and handed it to DOE? Was the alleged sex that she had in school proven? Thoughts?

It is unbelievable how many bad principals that are destroying our schools are protected.

hey chaz, please tell me you have more pictures! sure like no one else was thinking it.

I am not sure why noone else is commenting that it was inappropriate that her boyfriend was the former P.T.A President at the school, thus the parent of a student. Doesn't it seem extremely poor judgement for a principal to have a relationship with a parent of a student? I could not imagine doing this. I think that should have been one of the charges. It is a shame that he apparently stole her personal photos of when she had been with her ex-husband and that is slimy that he did that. I just think she never should have gotten involved with a parent.

Geez, going through life with a name like Schmutz, as Michael Fiorillo mentioned, is a burden in itself. I guess she feels that she has to live up to her name.

Ironically she was one of the most respectful principals toward Atrs. I rotated into her school twice and on both occasions she treated me with professionalism. I've been to almost every high school in queens and can count on one hand the number of principals I've met. They usually can't be bothered to even introduce themselves. She was professional and so was her staff.

Fariña likes these types of Principals that atr ruining our schools,