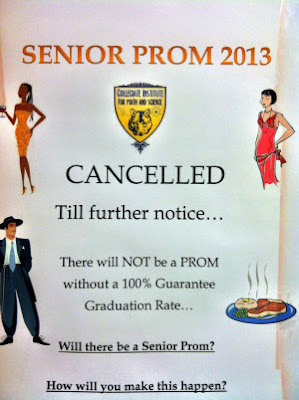 The question is how did Ms. Alvarez get the Principal job at New Rochelle High School and who in the DOE hid the reports of Ms. Alvarez's misconduct and gave her a glowing recommendation?  Those DOE officials should be terminated as well.
Posted by Chaz at 12:45 AM

what you might not realize is that new rochelle is also a POS school district. ms. alverez went from garbage dumpster to the garbage can. what difference does it make where, her true colors shined brightly and she got what she deserved!

Shadia Alvarez ’96, a one-time community manager and former assistant to the president for multicultural affairs at the College, is currently the assistant principal at the Collegiate Institute for Math and Science (cimshs.org) in the Bronx, New York. She has been invited to participate in the New York City Leadership Academy, which prepares future principals for the city. She is currently developing a proposal to launch a small NYC high school in 2013 that will feature such Antiochian concepts as community meetings, student involvement, experiential learning...

Ms. Alvarez was quite the shining star of diversity training and edu-babble:

Anyone who can get through ten minutes of this nonsense (Contemporary Concepts of Staff Development Training on Diversity and De-Biasing) deserves a medal.

Reggie Richardson and Kavita Gupta hooked her up with the job and have similar corrupted back rounds and all were apart of the leader program in 2009...
2/3"🛑All Leadership and ADASA trash found their way to new Rochelle..🤔 CSA and adasa connection is nyc wide ... but the csa / latino caucus and black caucus is statewide... 🤔"
Page ready: NYC Public Schools Commentary (@NYCSchooIs) | Twitter

Education is a field that seems to attract the most interesting human beings. The business world does not deal with indivimakeduals such as these leadership principals who are trained to eat like doberman pinchers.

A bit unrelated but regarding public sector unions and individuals not being mandated to pay union dues now because individuals may not agree with the political spending of their unions.

However, if I disagree with my unions spenditures I do not have to pay union dues….Works for one but not the other?

Did anyone see the other article in the Post about the credit recovery? It was mostly small schools that were accused of cheating using credit recovery because they are not monitored as much. Also at the end of the article, it said that DeWitt Clinton, one of the schools where teachers had to reapply for their jobs last year, was also accused of cheating using credit recovery. If you didn't know it, their graduation rate went from 49% to 69% in one year. Nobody sees that as a red flag? Is the DOE really only concerned with the numbers and not how schools are actually getting there? Sad state of affairs.

Let's just call all this what it is, which is social promotion.

The only difference now is that the DOE (as well as NYSED) cooks the books to make it appear as if the promotions and graduation are actually earned. Tests being less than half a course grade, Regents conversion charts, "credit recovery", course codes that don't match what's being taught: all of these are scams perpetrated on an unsuspecting public and worse yet our students who are led to believe they are proficient. The students then go off to college or to the workplace and fail because they were held to account or asked to do anything substantial.

This woman has connections that is clear. That is the only way such awful people go from one gig to another.

Just commenting on this principal (Jennifer Sinclair) in Nebraska who sent out a memo to the staff for christmas decorations guidelines.

The principal outlined that teachers should not use CANDY CANES because the candy canes could possibly signal Jesus - J - with the red signaling blood and the white the resurection and this could affend those who do not celebrate Christmas....

Well, I am happy to report that the board in NEbraska has REMOVED this insane block head who somehow became a principal. So glad the board finally had some balls stating that "officials sent a statement saying "the memo does not reflect the policy of Elkhorn Public Schools regarding holiday symbols in the school."

Did anyone hear about the principle at Secondary HS of Journalism? This is the school that had the student walkout!

Is there any chance that diversity trumps competence nowadays? In other words, perhaps Ms. Alvarez was recommended for the "Leadership Academy" and her subsequent principalships due to her high status (in the education and academic fields) as a Latina woman? I found no record of extended success as a teacher or assistant principal in her resume.

Is there any chance that diversity does NOT trump all other criteria for advancement in the DOE?
I

You people are spot-on. So happy to know that I’m not the only one who sees it.
ADASA and fraternal caucuses have infiltrated the NYSED- academic requirements and disciplinary policies have been diluted. Attendance has been drastically deemphasized so that lazy uncommitted students can do makeup work and pass classes at their leisure and convenience. Then schools will wonder why regents pass rates are falling and student readiness for college is so poor.

Spot on!
ADASA has been influencing policy for years.
They’ve protected numerous horrible principals in the DOE. Alvarez is but the latest.