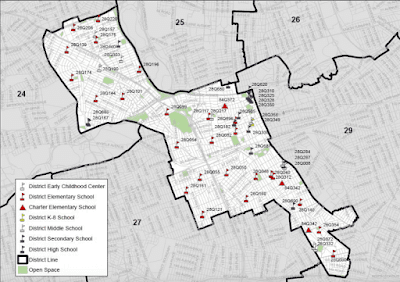 I read the article in Chalkbeat that District 28 in Queens is going to try to integrate their schools. While the policy of integration is a worthwhile goal, I believe that the unanticipated consequences will lead to the middle and upper middle class parents taking their children out of the public school system or send their children to relatives who live in the adjoining District 25 or 26 schools.

While District 28 is a highly diverse school district which includes the relatively wealthy White and East Asian communities of Forest Hills and Kew Garden Hills in the far north of the District and the poor Black neighborhood of South Jamaica in the South.

First, most parents will not allow their children to take public transportation (two buses) and a commute of an hour or more from their homes in the northern part of the school district to schools in South Jamaica and adjoining communities, where the schools are academically low achieving and through dangerous neighborhoods.

Finally, many families do not own a car and if a problem occurs at the school they cannot easily get to the school to pick up the child.

While District 28's goal is noteworthy I cannot see it succeeding without losing the middle and upper middle class..
Posted by Chaz at 6:03 PM

People buy houses in good communities because of the schools! And now they want to take their kids and bus them across town??? NO! People will move or switch their kids to private schools.

if the process were going to be gradual integration, what are possible first steps? Target just middle schools? Maybe draw better district boundaries? Weren't these drawn to enforce segregation? (circa 1970, right? Just look at District 2).

But say the boundaries are immutable, but that integration is an important goal. And say we know that it won't get done in one fell swoop. What's your first step (that's actually a step)?

As the formerly Catholic Schools have become "Academies" they are now openly campaigning for non-Catholic students to fill their seats at $10,000 per year & up. In Queens, this includes St. Francis Prep, Holy Cross (now co-ed), Molloy, Christ the King, etc. They have waiting lists that grow longer every time Too Tall Bill or his sidekick Mariachi Boy Wonder make a new announcement. The losers are the public high schools in Queens who will lose these kids.

The winners are the formerly Catholic schools where no such DOE nonsense applies. If they get a screw-up kid, they simply expel and the kid's parents suddenly discover they have a public high school as a safety net. Same when the tuition check bounces. Another "win" for public schools. Good going Too Tall and Mariachi Boy Wonder!

I live in District 28 and this will be my biggest fear with my 5th grader this fall. Nobody should be forced to attend a school that's not close to their home. You are asking a 12 year old to handle themselves on the train and bus. I would imagine giving out more metrocards or having more buses on the road affect both budget and traffic.

Why can't they just gather data from D15 over the course of the next few years and figure out if this works rather than forcefully implement this?

The people of Forest Hills will never go along with having their well brought up kids sitting next to bussed in thugs from East New York. They will protest. If that doesn't have any effect on the brain dead, tone deaf idiots now in charge of the school system, they will yank their kids out of said school system and send them to private schools. So you will end up just as segregated as before, because all the students in the system will be black or Hispanic.

A solid half- if not more- of our 8th graders go to Molloy, Prep, etc., regardless of religion. A few a lucky enough to get into LaGuardia, Townsend, and Leon Goldstein, and the rest are left swinging in the wind. Sad what happens to our kids.

If white kids are only about 15% of the school city population, why are they even talking about segregation/integration at all?

It's a black/brown world now, and the Asians are the logical next boogey man target.

This also doesn't take into consideration the schools that are already demographically Hispanic and African American. What are they going to do force white kids to attend these schools? These schools will still be segregated.

I can't see how District 28 will convince middle class families to send heir children to Jamaica.

Why are integrated schools nonsense? Integration benefits everyone including the white and Asian middle class kids. Weve read cases where white/Asian college students use n words, use black face and other very insensitive/discriminatory acts because they never learned or interacted with others outside their race and without the history or empathy are not equipped to live in a global society. Segregation doesnt benefit anyone.

What makes students from East New York thugs? I am a proud product of East New York, I attended Brooklyn Tech, Columbia for undergrad and Princeton for my grad school. I have lots of friends who are hardworking loving people who are fathers, mothers, sisters, aunts. I take offense that you will characterize me and my family as thugs and imply we are criminals. Please check your bias, your racism is showing.

These were the same schook integration conversations we were having as a country in 1965, sad to see how little we have evolved as a country. The problems is not the students, the problem is the adults. As a black educator I am saddened to hear my peers think so little of the students they serve.

I work in District 28. Parents who live in the $3m houses in Forest Hills Gardens in the Russell Sage zone or those in the condos and coops that go to Halsey WILL NOT see their kids bussed to JHS 8 in South Jamaica or Basie MS 72 in Rochdale. I worked at 72. You have to have quick reflexes there to dodge the flying chairs. What will happen is that these parents will take their kids out of the public schools. The people in the Gardens have money to burn - so those kids will go to St. Francis, Molloy oe maybe even east to Kellenberg or Chaminade/Sacred Heart. Those with the BIGGEST bucks will put their kids in The Kew Forest School - at $38k per year, not too many chairs are being flung and NO ONE is being told to suck dicks. Sorry, people. That's how this will play out.

I lived in Ozone Park when they rezoned Lane to integrate the school. My area had gone to John Adams for YEARS, but we were part of the cutout to suddenly go to Lane. So instead of walking 15 minutes to Adams, a school in my neighborhood, I was going to take two subways into Brooklyn into a neighborhood may family didn't want me walking in. Even though I was in maybe 4th or 5th grade when the rezoning happened, my mom and grandparents said flat out, "You're going to a special high school in the City. And if we can't find one we like, you'll go to Mary Louis, Stella Maris, or Christ the King, and we'll FIND the money to do it". We were a solidly middle class family then. Imagine the resources the millionaires in the Gardens will use to avoid having their privileged spawn being sent to South Jamaica or Rochdale.

In my former district, 27, administrators set up a district-wide gifted program in the low income elementary school. That helped integrate the school.

It also happened to be my local school. Although all my children weren't in the program, I was happy to send them all to the school.