The DOE's "Children Last" Shell Game Is Exposed By Albany..... It's About Time 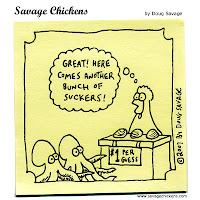 The Kleinberg administration has over the years has worked the old shell game that allowed them to use money as they see fit while starving the classrooms of supplies, teaching talent, and keeping class sizes unreasonably high, the highest in the State. No-bid contracts and highly-paid consultants are quite common at Tweed and even the alleged 200 million dollar cuts will not significantly change this cosy relationship. As for these cuts being real, seeing is believing. However, the Kleinberg shell game has been exposed and Albany is now aware of the DOE ploy. For the first time the big three of Joe Bruno, Sheldon Silver, and David Patterson have told the Kleinberg administration to forget about getting permission to change State aid rules. We know what you are doing and we are not amused. In fact here is what the Governer said:

"The lack of flexibility in State funding reflects the State's policy that Contract for Excellence funding should go disproportionately to schools with the greatest needs. If the City were not reducing its own promised spending for schools, it would have sufficient money to balance funds for other schools if it chose to do so."

In other words. You are cutting 300 million out of your budget and want the State to allow you to spend the extra 63 million dollars of State aid as you see fit? Forget about it!

To understand how well the Kleinberg administration has played the game of hide the money, the editorial and reporting staff of the New York Daily News and New York Post believe the DOE spin machine and that this hypocrisy is justified. Despite all three State leaders comments.

However, an article in the New York Sun by Andrew Wolf exposes the Kleinberg hypocrisy and writes about the Kleinberg administration's "smoke and mirrors" statements of educational progress as phony. Wolf writes about that there has been little or no progress in student test scores and a reduction in high school SAT results. Amdrew Wolf's article speaks the truth and in my opinion, the only tangable results from the Kleinberg administration has been a worsening of teacher morale, more ATRs, and an incrrease in "rubber room" teachers.

Realistically, don't look for Kleinberg to do the obvious, bring experienced teachers back in the classrooms while eliminating school budget cuts and reducing class size with the surplus. Instead, look for the DOE to keep the ATR and "rubber room" problem going and indirectly cut school programs that come from Tweed's 200 million dollar budget cuts.

In other words, Tweed's "Children Last Program" will continue until the next mayor takes office.

I just pray the next mayor is not a Bloomberg clone. I know oo many New Yorkers (not teachers) who think he is doing a great job. Most believe the crap tehy read about ATRs and rubber rooms.

It will indeed continue till they leave office. The UFT has been saying, "Wait for the next mayor" since I started teaching. They seem to support mayoral control in the hope that the next mayor will be pro-education. But I've been around for 24 years and I've yet to see that mayor.

I hope they're right. But I have no reason whatsoever to think they are.

The UFT is wrong. The Great Pumpkin is more likely to show up than the education mayor.

I guess I am an optimist. I can't believe the next Mayor and Chancellor will be as bad as these two.

I also believe that Randi & gang know the anger out there from their membership and will fight for a end to the ATR crises and significantly reduce the "rubber room" population.

I can only hope what little faith in "Unity" is justified. Of course pass history suggest otherwise. if they continue to fail their membership, it woudn't surprise me.

My biggest fear is that Randi sneakily negotiates yet another "early" contract before Bloomberg leaves office.

Anonymous said...
This comment has been removed by a blog administrator.
12:46 PM

The current DoE policies will continue in some shape or form under next mayor or chancellor. school budget can only get tighter in next few years, they will have to squeeze whatever they consider to be the excess out of the system.
I consider myself to be fortunate with only a few year to get to retirement. I will not be surprised to see such athing like tenure disppear in next 5 years.

Anonymous said...
This comment has been removed by a blog administrator.
11:38 PM

I hope you are wrong. However, I wouldn't bet on it.

If only our union would draw a line in the sand and stop giving up our rights. I caAn only hope