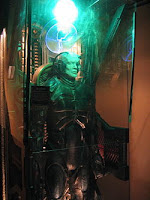 During my relaxing summer off from the stress of being a teacher and disrespected by the administration I was watching an old Star Trek series on the Scifi Channel and one of the evil villains were a species called the "Borg". Half living, half mechanical, this species worked as a collective intelligence and assimilated other species it conquered. Any individual thought is stamped out and the drone that dares to think independently is terminated. I couldn't help to think about the similarities between Joel Klein's DOE and the "Borg".

Joel Klein's DOE, like the "Borg", does not allow for independent thought. Any teacher that tries to stand up to the DOE finds themselves in the "rubber room", facing termination. The new administrators that are increasingly coming from the "Leadership Academy" with little or no teaching experience, are told how to treat their drones, oops I mean teachers. They are taught that all collective thought originates and end with them. Except when it comes from Tweed of course. Any independent thought by the drones, oops teachers, I did it again, shall not be tolerated by these newly-minted DOE Principals and insubordination charges leading to termination will be filed. For the newly assimilated drones, I mean teachers, when these Principals yell jump and when the teachers don't jump high enough, they will be denied tenure, hence termination, just like the Borg drones.

I used to think we were just cogs and the students were the widgets in the failed business model but I now realize we are only a species to be assimilated and become a drone for Joel Klein's DOE. Joel Klein's DOE may think that "Resistance Is Futile" - but I and other education bloggers will be fighting on until Joel Klein's Borg are defeated, just like in Star Trek.

I will end this post with an old Vulcan saying to the teachers "Live Long and Prosper".
Posted by Chaz at 9:12 AM

Hey Chaz like you I try to gleen life lessons from the popular culture. It is always fun and my job as an educator to turn my students into critically thinking young people that can understand beyond the superficial of everyday commmerce.

Sitting in the rubber room for the last month of this past academic year I always started my day with this ditty on my Ipod:

I thought it was cute equating the DOE with the Borg. I guess teachers are not into star trek.

Keep the faith while in the "rubber room". Try to help those teachers that can't take it. Remember, just because the DOE sent you to the "rubber room" you are still the same caring teacher you were before.

Actually, Chaz if this makes any sense to you I will be on a paid sabbatical from the rubber room for a year! LOL, Perhaps when I return from my sabbatical I will have to report back to the rubber room? Stay tuned....

You are now part of the Collective. May the farce be with you.

What are you doing on your paid sabbatical?

Getting into the best shape of my life, travelling and of course going back to school! I will not be defeated I have many things to offer my students and I've done nothing wrong!