Why Mayoral Control Is Bad For NYC Public Schools 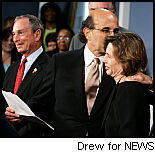 Finally, it is no secret that the bureaucracy at Tweed has increased significantly since Bloomberg took over the school system. In addition, the no-bid consultant contracts and high priced non-educators are strangling school budgets as money for the classroom is diverted to Tweed at the expense of the students. I won't even get into the "Charter/Small schools" that cost money and hurt the more traditional schools in the system.

Why is Mayoral control bad for the NYC Public Schools under Bloomberg? Just take your pick of the items listed above.

Tweed's "children last" and "education on the cheap" continues.
Posted by Chaz at 6:45 PM

Right you are, and I have another reason. If Klein has another 4 years there will be nothing left of the Academic High Schools. Perhaps a token few will remain.
We will need a Vice President for ATR's at the current rate.

I marvel that our part-time UFT President will not take a principled stand against mayoral control, despite overwhelming evidence it's bad for both kids and teachers. People who ought to know keep telling me she just wants people to like her. Unfortunately, that's one of the worst priorities a union leader could have, and we pay the price every day.

I find it incredible that so many of our Union and political leaders choose to ignore how Mayoral control has hurt the schools. It's like they just put their collective heads into the sand and not see the problems.

All while Randi and the UFT Leadership Academy seem to observe this from the other side of a two-way mirror.