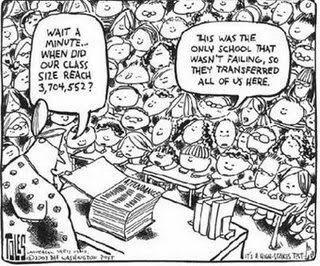 In 1954 the Supreme Court of the United States overturned the separate but equal policy for schools throughout the nation. Now 55 years later the phony education reformers in the DOE and the Bloomberg Administration have not only ignored the historic Brown vs. the Board of Education Supreme Court ruling but have encouraged separate and unequal schools in New York City.

Many of the Charter and small schools are racially segregated with numerous Charter Schools in poor areas having a student population of over 92% Black and few Hispanics or 92% Hispanic and few blacks. Furthermore, the Charter schools and until recently, the small schools seem to exempt the most needy students from admission. These Charter Schools do not welcome English Language Learners, Students with disabilities, and children with behavioural problems. Many other schools now have Asian. Jewish , Arabic, or sexual orientation themes. Who do you think go to those schools? Moreover, the City allows a separation of the sexes which is against the intent of the Supreme Court ruling.

How does New York City get away with ignoring the 1954 Supreme Court ruling on the separate but equal education issue? Easy, both the Liberals and Conservatives of the educational reform movement look the other way. From Bill Clinton to George Bush to Barack Obama, the federal government has looked the other way as schools open with a student population that is of either one race, gender, or cultural identity. Michael Myers of the New York City Civil Rights Coalition in a Daily News opinion piece stated it best when he wrote how Bloomberg and Klein has oversaw the Balkanization of the NYC schools.

The education reformers justify Bloomberg's and Klein's ignoring of the 1954 Supreme Court ruling by showing how the schools have seen scores rise and the achievement gap narrow. However, most veteran educators know that New York State keeps dumbing down the test (all school districts in NYS have shown similar rises) and that the achievement gaps has not significantly narrowed according to the NAEP. Raul Gonzales pointed out in his Daily News Column that the statistics trumpeted by Bloomberg & Klein are suspect at best. Until the most recent NAEP results are published, no independent-minded educator will put any faith in the New York State test results.

Separating the students by race, religion, sexual orientation, gender, or cultural identity is morally wrong, ignores the Supreme Court's 1954 decision, and is against the basic idea of this country which strives to integrate all people into one common nationality of being an American.
Posted by Chaz at 5:17 PM

Don't forget the Specialized High Schools, along with Townsend Harris and the other exclusionary schools in this mode.
They are incredibly disproportionate when compared with the comprehensive schools' populations