Where Is The SCI Investigation Of Chancellor Klein? 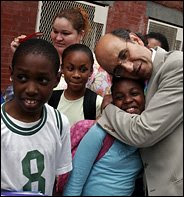 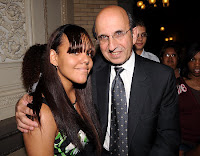 In the bizarro world of the DOE any physical contact between students and teachers is presumed to be corporal and/or sexual in nature. In fact the Principals tell the teachers "do not touch the students" because of the fear schools have of the DOE's perverted obsession with sexual misconduct and the biased & flawed SCI investigation that will substantiate it. However, there appears to be one person exempt from this presumption. Its our wonderful Chancellor, Joel Klein. Time and again he puts his hands on students and never is SCI called to investigate his actions. Whether it is a full frontal hug with reluctant female students at PS 123 in Harlem or the DOE defined inappropriate touching that teachers are subject to. He is of course the Chancellor and the rules apparently do not apply to him.

In Chancellor Joel Klein's witch hunt to go after teachers, many teachers (especially males) have been removed from the classroom for alleged inappropriate touching of a student's clothed shoulder, an elbow, and a lower arm above the wrist. In fact, Joel Klein's obsession with sexual issues is summarized in his famous statement about reassigned teachers found in Betsy Combier's blog was as follows:

It seems, as the three pictures obviously show, that our Chancellor is exempt from his own DOE regulations. In the first picture, the Chancellor's face is pressed into the girl's head as he hugs her. In the second picture Joel Klein is uncomfortably close to the girl and is shown starring at the girl (what is he starring at, the face?, chest?, or breast?) and ignoring the boy. In the third picture the Chancellor has his arm around the girl and his hand appears to be touching the girl's bear skin on the back and certainly the upper arm near the shoulder. Further, his body is pressed into the girl's body. While normal society may not see the Chancellor's actions as being sexual. I must point out it is under the Chancellor's own rules that when a teacher is accused of doing the very things the Chancellor is pictured doing, or even less, a SCI investigation is conducted of the alleged "sexual activities" and the teacher finds himself removed to the "rubber room".

Under the despotic regime of Chancellor Joel Klein (known as the kissing Chancellor by me) not only is the teacher presumed to be "guilty unless proven innocent" but everyday ordinary physical contact between the student and teacher can land the teacher in the "rubber room" and face a termination hearing for sexual misconduct. However, as I said previously, for Chancellor Joel Klein these rules do not apply. Its good to be the king!
Posted by Chaz at 3:45 PM

What I want to know is, where is Klein's other hand in those pictures?

based on the pictures shown, I think this calls for Chancellor Klein to be investigated. You are perfectly right. Oh, I forgot, he doesn't have a signed contract according to info from Betsy, so he is not even the Chancellor. Who is that man?

I hope these pictures and my article helps teachers who were subject to these charges.

Separate and apart from showing the silliness (frivolity) of the false 3020a charges against many good teachers it would also demonstrate the disparate treatment of NYC employees.

Don't wait for Randi to make the obvious comparison; it would be too helpful for the falsely accused teachers and it might upset Joel.

I am being serious and yes, there are teachers who have been brought up on charges for doing less. I hope this post will be used by some of those teachers in their 3020-a hearings. Assuming they did not do anymore than what the Chancellor does