The Parallels Between Weingarten & Klein With Chamberlain & Hitler In Negotiating Contracts & Agreements Have Caused This Mess In The First Place. 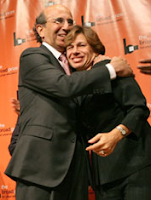 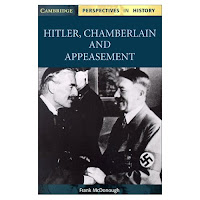 Back in 1938 Hitler's Germany was ready to back down on invading Czechoslovakia and annex the German speaking Sudetenland. However, along came Neville Chamberlain who appeased Hitler's demands and said that "I have assured peace in our time" and surrendered the Sudetenland to Germany. He then looked the other way when Germany gobbled up the rest of Czechoslovakia. The result was a destructive world war that saw over 70 million people die. Now the UFT must prepare for a "total war" with Joel Klein because of Randi Weingarten's appeasement policy with disastrous contracts in 2003 and 2005 that saw the rise of the ATR crises, loss of seniority rights, reduction in teacher due process rights, and overcrowded "rubber rooms". Furthermore, Joel Klein's policy of recruitment over retention was endorsed by Randi Weingarten and this allowed a worsening of teacher morale as Principals were encouraged to hire "newbie teachers" and get rid of experienced teachers by any means necessary.

Just like in 1939. Hitler decided to invade Poland thinking that the West would not interfere since they gave in to the occupation of the Saar Valley, Austria, and Czechoslovakia. However, the West finally said "enough" and World War II started. We now find ourselves in a similar position as a union since Bloomberg & Klein have for so long had their way with Randi Weingarten's appeasement policy allowing the DOE to ask for an inch and then take a mile. Just like the West in September of 1939 our union is at a crossroads. Do we continue our destructive appeasement policy that has resulted in raises that barely kept pace with inflation while slowly destroying the morale of teachers and creating a hostile work environment in the classroom? Or do we fight back?

It does seem that our New President is acting like Winston Churchill and engaged the Bloomberg & Klein evil empire in the "total war" heaped upon the union members by this administration. It is long overdue that our union is finally flexing their collective muscles and show Bloomberg & Klein that when you mess with the 800 pound gorilla expect to be bruised.

While, I am one of those bloggers that have liked what I have heard from Michael Mulgrew. However, I must agree with Ednotes online that under Mr. Mulgrew its been more style than substance so far. However, this contract negotiation is "a fight to the death" and the union cannot accept any "givebacks" since we are the last major union subject to the "City pattern" of two 4% raises for the two years with no "givebacks". It is time to show the Administration that we are no longer the punching bag under Randi Weingarten's tenure but a fighter that will accepted nothing more than total victory for its members.
Posted by Chaz at 6:20 PM

Hello everyone!
I would like to burn a theme at this forum. There is such a nicey, called HYIP, or High Yield Investment Program. It reminds of financial piramyde, but in rare cases one may happen to meet a company that really pays up to 2% daily not on invested money, but from real profits.

For several years , I earn money with the help of these programs.
I'm with no money problems now, but there are heights that must be conquered . I get now up to 2G a day , and I started with funny 500 bucks.
Right now, I'm very close at catching at last a guaranteed variant to make a sharp rise . Visit my web site to get additional info.

He says Mulgrew is the same as Weingarten? And you believe that over what you see, read, and hear with your own eyes and ears?

By the way I am reading a book about the Chamberlin's appeasement. "Munich, 1938"

So far it is mostly all talk. I do see a difference and I tend to believe hat Michael Mulgrew is serious but I need to see more action on his part. For example how about going after PINI principals by filing a PERB complaint? Or how about a lawsuit about the DOE's failure to abide by timelines in the contract? Just to name two.

This I did not take from you. At least I don't think so.

Folks wait until after the PEP meeting on Tuesday, watch what the UFT does not what you all are saying!!!!!

The UFt sent me a survey a few days ago asking about the website. Chaz, I suggested they have a PINI section on the website! I don't think they will add that, but wouldn't it be nice?

Hi Chaz, you are doing a great service to people. Your reference to a historical precedence is excellent and yet, I fear that what happened after this "I brought peace to Great Britain" as so stupidly Chamberlain declared on the mikes, will repeat itself in our NYC/DOE/Schools context.

So, the worst is to come.

Honestly, do these Kleinbergs realize that what they are doing is very similar to what the businessman in pre WWII Germany were doing at the bidding of the Third Reich?

Some interesting things to consider:

The Third Reich excluded minorities and also what their society considered "wasteful" parts of society, people with disabilities. So, leaving students with high needs in what some other educator called "Corpse schools" is quite similar. Starving them up off resouces because they are not considered worthy of our funds.

Returning to our reality, the worst is yet to come.

Mulgrew, regardless of the precedence set up by her mentor will have to take a firm stance and navigate through all the tricks and negative publicity volleys that these two/three scamsters (Pater/Bloom/Klein) are trying to pull off in NYC.

The biggest problem I find is whether as a Union leader/Politician, Mulgrew will have to balance out what the Union is fighting for vs the public image that has been controlled and vilified by a subjective media and the erroneous perception that the society at large has about teachers of all stripes in today's America.

My post did not get into the deeper meaning of Randi's appeasement but I do agree with you on the basis of your analysis.

Good analogy. Coincidentally I was thinking along those same lines today--just with a slightly different slant.