Has The DOE Fooled The "Hear-No-Evil" UFT Again On Implementing The "Rubber Room Agreement"? It Certainly Appears So. 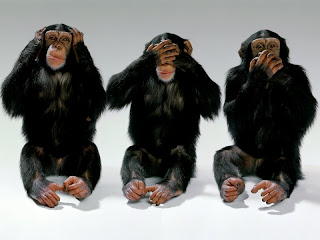 It is becoming increasingly clear that the DOE is not meeting the conditions in the recently negotiated "rubber room agreement". For example, take mediation. Presently, there is no mediation going on as the DOE believes that they must agree to mediation requests before mediation is started to get rid of the backlog in existing 3020-a cases. Therefore, the only settlements being made are the DOE's take-it-or-leave-it settlement offer where the teacher must admit guilt. What has been the UFT response to the DOE's failure to uphold the agreement? Dead silence.

It appears that the UFT leadership has this "hear-no-evil" approach and refuses to take the DOE to task for their failure to live up to the "rubber room agreement". There is widespread skepticism on all sides of the 3020-a hearing process (Arbitrators, DOE lawyers, and the NYSUT attorneys) that the hearings will be fairer since the DOE refuses to settle with many teachers who are subject to SCI investigations and continue to offer outrageous settlements that are insulting to the teacher. What happened to leveling the playing field?

Many bloggers had objected to the "rubber room agreement" because the UFT leadership failed to include the reassigned teacher in crafting the agreement. While I supported the closing of the "rubber rooms" so as to stop warehousing teachers, I certainly questioned the other issues. I also believed the UFT leadership was in over their collective heads in understanding the 3020-a hearing process without input from the people most involved in it. Unfortunately, it appears that is the case here. The UFT has again allowed the DOE to ignore both the spirit and intent of the agreement and the losers are? You guessed it, the reassigned teachers.
Posted by Chaz at 4:47 PM

Do you read this crap before you post it? You have no facts to back any of it up.

You are missing the point Chaz. The UFT is not in over its head. They know exactly what they are doing. They want all of the RR people OUT, not protected.

That is why I didn't need to see what the agreement actually said. Or the details of the teacher eval system to know that people are going to get screwed. And why whatever Mulgrew said to impress people before the election it was all irrelevant. They are on the other side.

They are colluding and collaborating. I've said it numerous times. They are Vichy.

As usual, Norm, you are on target.

I watch the education blogs often and I see that the UFT is monitoring whats is written. I suspect they are nervous about the new deals, unlike FDR's New Deal, their deals will further destroy teachers rights. Case in point the first anonymous comment on this piece. Make no mistake about this teacher evaluation agreement in the works. It will do harm to teachers and expedite termination of teachers. By 2013 my guess is that more teachers will be terminated than in all the past years combined.

If the teachers reject these bogus settlements, knowing any admission of guilt will count heavily against them on any future disciplinary action, what can DOE do? They have publicly stated the rubber room system will end. This would exacerbate their PR nightmare. Is this too clever for DOE's facilitators (UFT leadership).

"If the teachers reject these bogus settlements, knowing any admission of guilt will count heavily against them on any future disciplinary action, what can DOE do?"

Let me reiterate. The UFT wants people to settle or be terminated to get them off the books. They waste UFT resources by forcing some special reps to do something when they could use them as political hacks. The sooner they can get the RR people to settle the better it is for the UFT. So imagine people in RR hell with their main advisors telling them to settle or retire or whatever? It is damn hard to stand up to all that without a proactive union looking out got them instead of its own narrow interests.

It is what you get with an undemocratic union with no accountability. Maybe Klein is right. We need competition and choice - in choosing a union.

As a teacher, do you have to join the Union?

1:44. Yes - your dues automatically get taken out of your paychecks. If you're looking for a non-union job, apply to most of the charter schools.

Good idea. I hate this Union bullshit. You Union freaks are all nut jobs.

I really appreciate the kind of topics you post here. Thanks for sharing us a great information that is actually helpful. Good day!
mba india

The Veteran NY Teacher said...
This comment has been removed by the author.
6:09 AM

I do have the facts. Ask either the UFT or NYSUT how many cases are being mediated? The answer zero, Before, you accuse, know your facts.

You have been proven correct again. I cannot disagree with you on how the UFT treats the reassigned teacher.

Why don't you check with your "Unity" masters and they will admit it is true.

Here is a fact, the UFT continues to secretly negotiate behind their members back. Be it the "rubber room" agreement, teacher evaluation, and now the Charter school cap. And that is a fact!

How about identifying yourself instead of hiding under anonymous, speaking of facts.