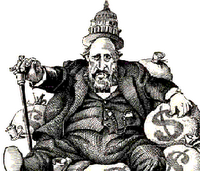 I am never surprised how Tweed pleads for more money to fund education only to have them use the funds to pay for highly-priced consultants and their useless programs through the no bid process, give raises and bonuses to managers while freezing school staff salary increases, and dramatically increase their Central Bureaucracy headcount from 1,322 in 2003 to 2,286 in 2010, a 70% increase, while demanding 4% cuts in the school budget (12% in the last two years) and not hiring 2,000 teachers who were to replace those teachers that are leaving the system.

The NYC Public School Parents Blog has previously questioned the DOE's priorities in allocating funds and in increasing the headcount at Tweed as well as Gotham Schools. However, the news media seemed to ignore how the money was used by the DOE. Finally, the New York Daily News published an article that questioned the tremendous jump in headcount at the Central Bureaucracy at Tweed at the expense of the schools and field offices Here. Tweed's pathetic defense of their spending priorities was laughable. Despite the DOE's increase in the Office of Accountability (from 8 in 2003 to 79 in 2010) and Office of Legal Services ( 48 in 2003 to 110 in 2010, an astounding 129% increase!} they still lack the accountability or legal ability to properly oversee the Financial Management of the Agency as Juan Gonzales's article shows. What are these Offices supposed to do?

The way Tweed allocates money to the school is best found in Abbott & Costello's "It's Payday" with the schools being Costello and Tweed being Abbott. Is it any wonder that the DOE's policy of "children last" continues.
Posted by Chaz at 11:15 AM

It is interesting to see the similar shenanigans being played by our big city mayors and their unqualified hacks that run the schools. Wish we could aggregate that information to explain better what has been happening and what is happening now to the ideal of quality public education for all and how we are reacting or planning against the dark forces.

In Chicago, two of caucuses within the Chicago Teachers Union and other folks have been asking for a forensic audit of the Chicago Public Schools. Through the reporter Ben Joravsky's work, we find that there are two sets of books. One that was posted online for public consumption that was incomplete and had errors. This came out during a private very controlled meeting, handled by City Hall veteran and now CPS writer of Tall Tales, Monique Bond.

Karen Lewis will be pressing the issue still on opening the books. Huberman, a Daley city hall manager turned magically into a CEO of schools, has used the budget crisis to demand that teachers take a freeze on the raises. Where it stands, nothing is going to happen, what ever that is, until the books are open. Karen has offered to sit down with our CEO and go over the real books line by line, to see where we can possibly save money. I haven't heard if there was a response from Mr. Huberman.

For more interesting reading on how Chicago Public Schools are run, visit the Chicago Reader
http://www.chicagoreader.com/chicago/ArticleArchives?author=847359