All ATRs Are To Be Placed Next Week. Or So That Is What The DOE Central Office Claims. 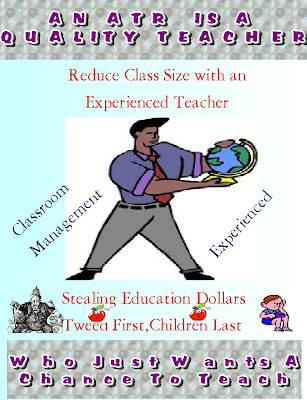 I have been informed that all ATRs will be placed into schools next week by the Central Bureaucracy. How will these placements be determined? Hopefully, it will be by need basis. However, given the track record of Tweed, I wouldn't count on it being done with what will be best for the schools.

I will not be surprised that a school gets an ATR Social Studies teacher when they need a Math teacher. Or that a Science teacher fills a Math position while a Math teacher is sent to a another school to teach Science. It appears that the Children First Networks no longer have any authority over ATR placements and all assignments originate from "Central". That brings up the issue who is actually in charge of ATR placements and how does a school Principal know who to contact for an ATR? I have spoken to a Principal who told me that she was informed that she was to contact her Superintendent for an ATR. That is all she was told and not to contact anyone else.

Since there are over 1900 ATRs to be placed, it will be a real problem to match ATRs with vacant positions and I see numerous mismatches as "Central" fails to match school needs with ATR licensees. I hope I am wrong and the new ATR agreement is enforced. However, past agreements have failed as the DOE reneged or ignored the previous non-enforceable ATR agreements. (Yes, this agreement is also non-enforceable). Let's see if the DOE is serious about placing ATRs in schools by need basis or it is simply "the same old song" of the DOE doing what is best for them and not for the schools they run.

What's wasting $120 million dollars this school year during a budget crises when the DOE can continue to demonize the ATRs as lazy, bad, and incompetent teachers in the news media. To the DOE, portraying the ATR as a failed teacher is "priceless" when it comes to public relations.

Never mind the fact that, as an ATR, you have no idea whom to contact should there be an issue with your placement. At least as a per diem sub, you can pick and choose the schools at which you work. As an ATR, you don't even know who the d*** person is who is guiding your journey through this Purgatory.

Seems that even the per diem people are given more rights and autonomy than were are. We ARE the pedagogical trash heap.

I hope great teachers who are in ATR status really do get a good placement.

Do you really think the DOE will follow the agreement? Already they are telling principals the loopholes in how they can retain their newbie subs.

At this point, I hate to say, the best scenario is actually the day-to-day coverage stuff. No papers/lesson plans/grades, no real observations (if you cover for a different teacher every day and change schools every week), and NO TDR. Hard to nail you for incompetence and lament your "lack of involvement in the school community" if you are a nomad moving weekly.

I'd really refer a position of my own so I can teach, but barring that, my goal becomes staying alive in this teacher-hating climate.


I want to avoid a TDR at all costs for the time being.

Atr's with questions or problems should contact their UFT office in their boro. Amy Arundell a very good and efficient UFT representative may be the person to contact at the UFT central office. Telephone 212 777 7500. Amy was very helpful with the numerous ATR problems that she resolved at my school that closed in 2010.

Atr's with questions or problems should contact their UFT office in their boro. Amy Arundell a very good and efficient UFT representative may be the person to contact at the UFT central office. Telephone 212 777 7500. Amy was very helpful with the numerous ATR problems that she resolved at my school that closed in 2010.

I've applied to schools online,
attended the job fairs,
I'm not holding my breath on getting placed.
There is so much demonstrated DOE prejudice that makes me doubt that this week's fairs are "for real".
I've been trying to adapt the "best practices" [sic], such as:
Education Buzzwords: Image and Reality: http://www.illinoisloop.org/buzzwords.html
But I doubt that the DOE will place us in real positions; if I do get a position, as a mid-career teacher, I'll be vigilant watching for admin harassment.

Believing that principals will follow official rules, directives, pronouncements, agreements, etc., is naive.
It is like assuming laws against racism will spur racists to not be racist.
The DOE has spent the last 10 years denigrating teachers and their practices. After thoroughly inculcating in principals a culture of derision of teachers, what makes anyone think that principals will give ATRs a fair shot?

My hope for a fair shot has long since been dashed. Well, maybe not dashed, since I never really expected one. My hope at this point is a feasible commute to a place where I am ignored for the most part. That's what I had last year as an ATR.

I was in the ATR pool last year and was doing a Social Studies vacany(my license area) the first 2 weeks of last September and was not evaluated, observed or even given any supplies etc. The only time the Social Studies AP walked in the room was to introduce the younger, cheaper "better" fit for the class. At that point, I realized that principals and supervisors have no interest in hiring ATRs which is fine by me, but do not come to me talking about how ATRs are a part of the school in which we are placed because we are as valuable as a roll of toilet paper. I am fine with all of this because it means that any administration questioning etc can be viewed as harassment in my mind

I don't even mind being an ATR but I hate the idea of being forced to go to different school each week withour having any choice to refuse. Also, I think if there are layoffs we would be the first to go. I am the sole provider for my family and I need this lousy job.