We Finally Know Why Student Academic Achievement Is So Poor. It's SpongeBob and Apple Juice! 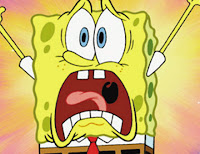 There has been an increasingly bitter debate on why it has been difficult to raise student academic achievement. For the educators, except for E4E, it is large class sizes, lack of funding, high teacher turnover, and lapsed student discipline. Moreover, students in poverty had a much lower academic achievement than higher income children, allowing or a large academic achievement gap. For the Education reformers,, the no "excuses crowd", made up of billionaires, hedge fund managers, and politicians blame the teacher unions, and bad educators for the failure to raise the academic achievement of students, especially the students who live in poverty. However, it now appears that both groups are wrong.

Yes, it now seems that SpongeBob and Apple Juice are the real villains of why student academic achievement is lacking. A study done by the University of Virgina on sixty 4-year-olds show exposure to SpongeBob cartoons reduced their attention span and destroyed brain cells. Furthermore, it now turns out the the levels of Arsenic in Apple juice are much higher than in water. Some evidence suggest that Arsenic reduces the IQs of children and can cause learning difficulties.

Boy did I get it wrong. I really thought it was poverty, community, and parents. In addition to large class sizes, high teacher turnover, lack of resources, and poor discipline for the reason for our failure to improve student academic achievement when all along it was SpongeBob and Apple juice who are the cause of the failure to raise student academic achievement.
Posted by Chaz at 6:32 PM

I'm glad to see we've finally found an answer to a question that's vexed us for decades!

What was the explanation for my lack of "academic achievement" in subjects such as geometry and chemistry? Was it too many Tom and Jerry Cartoons? Overdosing on Popeye? And what about that awful Howdy Doody? Did his character ruin a generation? Or was it that I didn't give a flying crap why the triangles were congruent or how to balance the equations or calculate the molarity or the molality or whatever that irrelevant fluff was?

Rise of the Machines said...

And I suppose that playing with my erector set back in the days caused me to excel with the ladies...wocka wocka wocka!

I know the Three Stooges helped me to understand physics better.

You are so funny. I guess the reduction of SAT scores is proof positive that you are right about SpongeBob and Apple juice.