The Difference Between The Chicago And New York City Teacher Unions When It Comes To Striking For Our Rights. 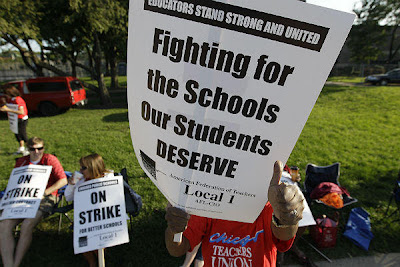 The most historic event in this decade has finally come to an end and that is the game-changing Chicago teachers strike against an egotistical pseudo-reform minded bully Mayor named Rahm Emanuel.   While the teachers appear not to achieved everything they wanted, they certainly put a stop to the Mayor's abusive and disrespectful actions against the teachers in the Chicago public school system.  While there are some similarities between the two cities, they both have egotistical and bully Mayors who despise teachers and are intent in closing public schools and replace them with Charter schools,  refuses to give the "City pattern" to the teachers, and an unwanted teacher evaluation system that is heavy on standardized tests with no appeal process.  However, there are many more differences.between the two cities and their teacher unions.

The Taylor Law:  First and foremost there is New York State's Taylor Law which prohibits public workers from striking and penalizes strikers by giving up two days pay for every day of the strike.  Moreover, the union would lose dues checkoff rights and the Transit union found that out the hard way when only 33% of their members were willing to voluntarily  pay their dues after the union lost their right to automatically deduct dues from its member paychecks.

The Triborough Amendment: Unlike most states, New York public workers are protected by the Tribourough Amendment which prohibits the employer from imposing contract conditions without  a collective bargaining agreement with the union.  For example, in Chicago, the Mayor imposed a longer school day, a teacher evaluation system heavy on standardized tests, worsening working conditions such as  layoffs, unpaid sick or personal days,  and unlimited class sizes. Many of these items have only been eliminated or modified because the Chicago teacher's union deciding to strike.

Layoff Procedures: In NYC teachers who no longer have a classroom position because of closing schools or are excessed from their school will be put in the Absent Teacher Reserve (ATR) pool until the teacher gets a classroom position in another school.  Some teachers have been ATRs for years and despite complaints and failed legislation by the City, no change is expected, especially during the Bloomberg Administration.  By contrast, teachers in Chicago are given a short window to find a position or be fired.  According to the Mayor he wants it to be five months, the union has tentatively agreed that half of the excessed teachers will not be offered new positions and they call that a victory? I certainty don't.

Class Size Limits:  NYC has a class size limit of 34 students any class over 34 students is subject to an expidited grievance and for the most part are resolved by October.  On the other hand Chicago has guidelines but no class size limits and there is little a teacher can do when their class sizes approach 40 students. 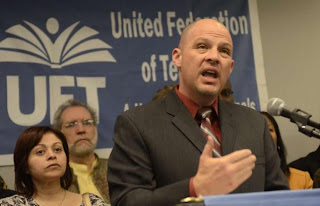 Union Caucus: The Chicago teachers union is controlled by a once-dissident caucus that took power when the members voted out the previous "Unity-like caucus" for their appeasement polices when confronting the City. in the past.  By contrast the NYC teachers union has been and always controlled by the "Unity caucus" and  its appeasement policies that reduced teacher "due process rights" and worsening the classroom  environment have never been seriously threatened by the members, even after the horrible 2005 contract which Randi Weingarten gave the store away for measly raises (3.15% annually) that didn't even equal the New York City inflation rate of 4% at the time. Furthermore, the UFT lacks transparency and that frustrates members while the CTU is much more transparent and that are the  differences between the two unions and  that explains why the Chicago union is much more activist than the NYC union .

With all the labor protections and severe penalties our State has I cannot see our union or any of the dissent caucuses asking for a strike vote at this time.  Especially since the Mayor is powerless to change our contract, it is best to wait him out and negotiate a fair contract with the next Mayor in 2014.

All good and valid points, with the exception of negotiating with the next mayor.

Even if Quinn does not not come in as Bloomberg's proxy, the next mayor will be under intense pressure to continue the neoliberal policies of Bloomberg, even if they don't believe in them.

You need look no further than the prosecutors doing Bloomberg's bidding to eliminate John Liu to see how far these people will go. Don't think De Blasio and the rest haven't gotten that message.

They will continue privatization and their attacks on us, though perhaps with a little less open contempt than Bloomberg

It is time for Michael Mulgrew to go back to the classroom. He has no clue what teachers are up against. I met someone this week who told me that they will spend until 9PM in there school with no extra pay to decorate rooms and prepare lessons. By 9PM Mulghrew is sleeping.

Good start Chaz but you missed a whole bunch of differences. The strike was not only against Rahm, but also Obama and also the AFT/UFT slavish attempt to jump on the ed deform bandwagon. It was also lead by a new brand of union leader -- bottom up not top down, democratically lead. Not to say that the same thing can't happen there with a party in power. It will be interesting to see how the union election in Chicago goes this May. Can CORE win with over 50% of the vote and avoid a run-off?

The Biggest difference: Karen Lewis a nationally recognized teacher with more than 20 years of classroom experience v Randi Weingarten probably held a temporary license and was assigned to Clara Barton High School a few blocks from her home at that time in Park Slope Brooklyn. Leo Casey was the chapter leader and by several accounts was her caddy. She at the time was Sandra Feldmans second in command. v Now, Mike Mulgrew teacher at Grady HS where it appears his greatest achievement was to have an affair with a married guidance counselor who now holds a top position at the UFT. Enough Said!!!!