Why I Don't Contribute To COPE. 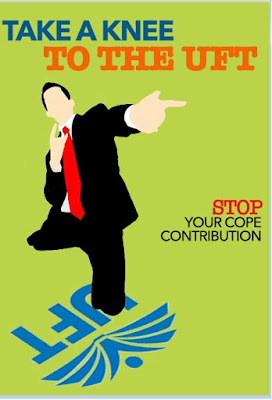 I stopped contributing to the union's voluntary COPE program because of their lack of transparency on where the COPE funds go to and to the highly questionable causes our union leadership contributes to.  Lately, Chapter Leaders have been instructed to push COPE to the members for the "vote no" campaign to the State's Constitutional Convention, also known as ConCon and if I thought for a moment that all the COPE funding would go to that noble cause, I would contribute to it. 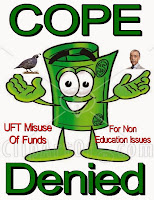 For example, remember the Quail and booze party the UFT had in Albany, using COPE money?  Or their contribution to Al Sharpton's anti-police protest? How about the various fringe organizations that the union leadership supports with financial assistance?  That comes from our COPE money, whether the members support the organization or not.

Until the union leadership provides a detailed breakdown of the financial contributions that is funded by our COPE money, I will not provide one red cent to COPE and nor should the rest of the membership.

To discontinue your COPE contributions read my post on how to do just that.
Posted by Chaz at 4:52 PM

I used to contribute to COPE. Then I stopped when the DOE with UFT complicity tried to close a school I worked at in the Bronx. What the UFT does not understand is how miserable working teachers are... or rather I think they know but just don't care!
I will gladly pay 3x times the Union dues we pay now -- if we had a union that actually protected teachers instead of perfecting rim jobs for NY politicians. When the UFT gets us a 20 year buyout option for 50 plus @ 40% i will start contributing again to COPE.
BTW - UFT I don't want the stinking raise that you will negotiate I want back all the respect you lost. I want early retirement now!!
Maybe I will continue to pay me union due after June 2018 if the UFT:
gets rid of Danielson rubric drive bys
gets rid of 4 observations
gets rid of Fair student funding
Bring back the seniority transfer system
Stop charging UFT members for PD
Place all the ATRs in their license area - NOW
Tell the truth about the lack of discipline in the schools
Talk about how dangerous schools are

I agree with you wholeheartedly!

I like the art work Chaz. It'd make great poster. They have been hammering the need for COPE to everyone who goes for a pension consulation. Two years ago I was told without COPE funds we'd lose our retirement. I asked what do you guys do with $1200 multiplied by 80,000 - 100,000 members? "Well, sir, that pays for your prescriptions, dental and eyecare - plus all the benefits you get from our collective bargaining - just look at the terrific contract we got you (2014) - as an ATR you are lucky to still have a job. We could have given the ATRs up but saved you." I told her that LIFO saved us and the UFT created the ATR pool and keeps it well stocked like the koi pond at my favorite Japanese restaurant. I also told her that the UFT pays for none of those benefits. "Sir, you are sadly mistaken. Without us you and all ATRs would be unemployed after six months." I said "Then all the cops, firemen and municipal unions would attack the UFT like a pack of pit bulls at a butcher shop."

Chaz, I was also given the run around by Egan when I asked where the COPE money went.
(still have the emails) Basically he said, "find it yourself" I found that 90% of it goes right back into the AFT!

An organization that turns their backs on teachers do not deserves any contributions.

Is the fax number on that older post correct? I tried to do it last year but it wouldn't go through. Unless there was an issue with the school's fax machine.

The success academies are filled with scab teachers who do not belong to a union but rather they belong to moskowitch. Moskowitch has the balls to criticize public school unions but her treatment of both students and staff is disgusting and a self profiteering scheme for these scab teachers and their swanky superiors.

listen to all the crybabies! once again I'm amused by the lack of backbone you have all shown. complaining is what the nyc teacher does best. I took the buy-out it gave me some extra spending money paid for my prior service which padded the pension benefit and I got a teaching assistant job in putnam county. yes, they complain a lot less than they're city counterparts. oh! the cafeteria doesn't smell like a garbage dump!

1:57,
How is Eva different than the UFT? I met another teacher crying this week. Her fifth year of probation for tenure and she knows she's not getting it. New teachers are treated like slaves and then discontinued. The UFT does nothing for them or ATRs. It's in the UFT's best interest to keep an ATR pool. A revolving door of newbies and their dues, as well as the dues of warehoused veteran teachers turned into babysitters. Janus is their main concern. The UFT only cares about it own survival as a well oiled bureaucracy.

Im def. Pulling out of union dues.if.Janus goes down...why pay dues when I will get everything dues paying people will get? This union has been losing since Shankar...and they.dont care...until now...

Our UFT should get their dues from the bad principals that they are protecting so much.

Principal Asya Johnson is the new principal at banana kelly hs in the bronx. The story is on chalkbeat here https://www.chalkbeat.org/posts/ny/2017/10/26/everything-you-got-how-a-bronx-principal-is-trying-to-restore-hope-to-a-once-troubled-school-one-student-at-a-time/

I swear I thought she was a student!!! Times are so bizarre the DOE has run a muck!

NY1 has an interview video with Chancellor Farina where ATRs are discussed.

@2:20, I looked up Asya's information through Linkedin/NY state certification. Looks like she finished her special ed degree in 2007 (no NY certification listed) and received her administrators certificate in 2012. She has minimal teaching experience, yet is responsible for leading a struggling high school. Not surprising though, after all, what experienced administrator would take this job?