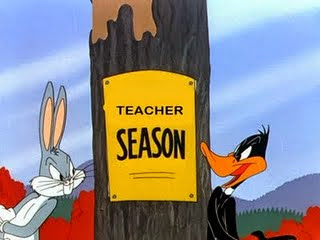 Very soon, the entire staff of Flushing High School will reapply for their jobs thorough the 18D process that is simply a fig leaf for the DOE and Principal to choose who they want.  Not what's best for the students of the school.   The 18D process usually includes a committee that consists of three DOE employees, the Principal, a representative from Tweed, and another DOE representative, either from the Superintendent's office or an assistant principal from the school.  The other two come from the UFT, usually the District Representative and another from the Borough office.  The result is usually a 3 to 2 vote with the DOE holding the majority.

Because of Fair Student Funding and recession era school budgets, the 50% of staff members selected usually consists of the cheapest teachers and most of the lower paid employees like paraprofessionals, school aides, and support service personnel.  The only veteran teachers selected are the lead teacher of each subject area, while the rest are usually not selected.  The result is the majority of teachers selected are usually untenured and the rest will be new to the system.  Most veteran teachers will be jettisoned to the ATR pool.  The result is far less than 50% of the teachers will find themselves back at the school in their position next year.

The DOE decided that teachers are the blame for the poor results at Flushing High School and not the administration or the students.  Flushing High School has had six principals since 2011 and each one of them had issues.  One was  arrested with drugs near the school.  Another was found guilty by a jury for sexual harassment and retaliation, a third alienated the entire staff and fled to the suburbs.  The only one that lasted more than a year was removed for trying to interfere with teacher surveys and stopped a student newspaper from being published.  Let's not forget some of his questionable academic policies.   His claim to fame was calling the principal's job at the school like the "hunger games"You can read some of the issues with the previous principals Here, Here, and  Here.

When it comes to the school, the student body is unrepresentative of the community.  Flushing High School is in the middle of Flashing's Chinatown and the neighborhood surrounding the school is 85% East Asian.   However, the school's student body is 80% Black and Hispanic with Asians only representing 17% of the student body.  Eliminate the South Asian students and the East Asian percentage is probably in the single digits.  I taught at the school in the 2011-12 school year and it was a real hellhole.  Read my post Here.  The majority of Black and Hispanic students that go to Flushing High School live many mikes from the school and can take up to two hours to arrive at the school from Southeast Queens or Elmhurst.  Showing up late or not at all is a common problem at the school.  Combine that with the large "high needs" population and it's no wonder that the academic problems persist at the school.

How does the DOE expect the school to improve with a relatively inexperienced staff and the same student body?  The answer is they don't.  The DOE just wants to reduce school salaries and push veteran teachers out of the system.  It's not about what's best for the students.
Posted by Chaz at 11:53 AM

What a joke? More ATRs in their 50s. Union looking the other way like always.

I’m sure next year they will add 3-4 more big high schools that failed to meet their so called expectations and make teachers interview for their jobs again . Where more over 15 yr teachers go into the ATR pool . This is a slow death of nyc teachers as a profession . In 10 yrs 70% of teachers will have 5 yrs or less .

It is very simple it is all about systemic age discrimination.

10 yrs ago when my school was closed they opened mini schools and high school students are trapped on one floor. All organizational systems were destroyed and it is a learning curve for these schools. Many have been closed or principles have come and gone! Most staff members were newbies and are long gone!

In the Flushing case I guess they are not closing the comprehensive HS but dumping staff!

So mini schools with meaningless ridiculous titles are proven failures. DOE can now just go in and take out staff at will in any school deemed failing!

UFT where are you?

In the words of North Korean leader Dotard describes how the NYCDOE operates and how they have destroyed a sacred thing in NYC and that being our public schools and the angel teachers who lead them to better lives. However, the dotards at the DOE still love the stench of bloomberg and his lacky chancellors who knew as much about education as North Korea has in getting a gold medal. Dotards.

Give us a buyout! No one over 30 wants this job anymore and the DOE doesn’t want us either. Let them hire someone for minimum wage to turn on the computers. I’m sure the stats will go through the roof with Big Bill and Granny.

families for excellent schools the fake organization pretending to be for the families of poor minorities except they are really nothing but right wing zealots who want to destroy public education - however suddenly they have closed up shop!!!

jeremiah Kiddredge the CEO let his little head do the thinking for him instead of his big head and now eva moskowitch and the entire scab of charters have abandoned this guy and closed up shop....lol lol Jereemiah was a bullfrog and a bull dog....I mean horn dog. So long families for excellent schools and oh by the way how did it go in massachusetts?

A blast from the past:

Richmond Hill High School was an almost exact parallel scenario to Flushing High School. It went from being a great school to the shit hole that it is presently.

The magnitude of the disaster at Flushing high school is beyond comprehension. The staff is pulled in 10 different directions every week. There are always outsiders in the building that walk through teacher classrooms. Few kids pass Regents exams, but group work and bulletin board Task cards seem to be the main emphasis. Information is never forthcoming. Directives are just thrown at the staff. It is arguably the most mismanaged school in the city. We are going through a rehiring process this spring without a chapter leader. She was taken out on 3020a charges right after the holidays. She is at least the 10th person to be brought up on 3020a charges in the past two years. The kids aren't the worst behaved, but many do very little, but play w ith their phones all day as they know teachers are forced to pass them. It is a god forsaken hellhole that not one staff member if responding honestly would ever recommend for anyone's kid.

It is unbelievable how they destroyed careers of good experienced teachers, and big schools.

Agreed,10 years ago all those schools were better. The Leadership Principals are destroying our schools, and Fariña is tolerating it.

They are too busy in going after teachers.

The DOE Legal is in a destructive mode.

UFT works with the DOE to make it easier to get rid of veteran teachers.

Whatever happened to ATR Supervisor Justin "The Dough Boy" Stark?

Anon 750 Per your interest in Justin "The Dough Boy" Stark, he was so tired of people contesting his annual U ratings as an ATR Supervisor, he is now an AP at Edison HS, Queens NY. Let them deal with his incompetence.

They gave him a position for lying and going after teachiers.

The involvement of DOE attorneys in encouraging principals, assistant principals, and field supervisors to "go after" teachers needs to be explored!

I had the "dough boys" wife, she said I was "highly effective".

Hey Justin, are you related to "pop n fresh"?

He is just a hitman. He goes after people that he was told to go after.

They just want to chase experienced teachers out.

Flushing high school has fired most of their staff and has refused to allow transfers for students. Flushing high school is a renewal school which allows you to transfer. Principal Accardi wants to keep his numbers up and not allowing transfers and his buddy Superintendent Alcoff gives him the go ahead. This is violating the students rights. Such a travesty. The students are doomed