The DOE's Bloated Bureaucracy Eats Up 24% Of the Education Budget. 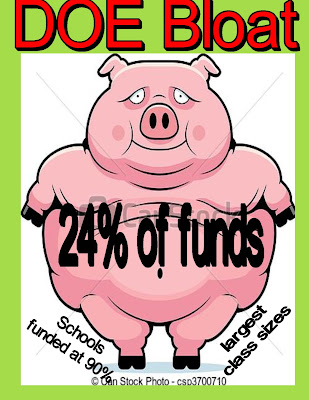 Yesterday, NYC Comptroller, Scott Stringer, blasted the DOE for its spending 24% of their budget on administrative costs.  This is over twice the national average of 11.1%.   Mr. Stringer cited the large class sizes, lack of resources for schools, and lack of adequate teacher hiring as factors that resulted with the funding shortfall of schools.  You can read it Here.

The almost recession era school budgets average 10% below their fair funding and the DOE inspired policies force principals to "hire the cheapest and not the best" teachers for their school.  Further, to make ends meet, the principals will try to have the maximum amount of students for each class, the largest in the State..  Finally, many schools would rather use "newbie" teachers who are not certified in the subject they are assigned to teach, rather than hire a more expensive qualified teacher in the subject.  This is widespread in the Bronx but many schools in the other Boroughs are also guilty of using unqualified teachers.  You can read many of my posts about the bloated DOE Bureaucracy under Tweed Money.

When the DOE Bureaucracy  claims its "children first" its not about the children in the New York City Public Schools but their own children who benefit from these DOE administrators high salaries and lack of accountability.  In fact, here is what Comptroller Scott Stringer said about the allocation of funds sent to the DOE.

“The Department of Education is a spending boondoggle,” he said. “They spend 24 percent of the money on administrators instead of teachers instead of resources for the classrooms.”


See the ICEUFT blog for their take.

Sometimes it is breathtaking, the number of outside people who come into my school on a weekly basis. Everyone in every dept has some kind of 'coach.' Even the principle has a 'coach.'

Drop all this 'coach' business and put those self-righteous, pompous airbags in the classrooms with us and do real work for a change. Show us your theories in action!

NYC spends 30 billion dollars annually to run the schools. So, 24 percent of 30 billion = over 7 billion a year to run tweed and the cronie lawyers

This is such a scam. Everyone wants part of the cow but the cow only has so much beef to go around. Twenty-four percent going to admin does not mean principals and ass principals. Many principals wish they can hire more ass principals. This 24 percent also means Tweed and Borough Center people. For example, Carmen retired but is still working or milking the system for two to three days a week. What can she really be doing? The renewals have retirees making 1200 a day as consultants or whores for the DOE.

By the way the MAC (Manhattan ATR Chapter) voted unanimously last night no ATR should interview in Queens. We have yet to hear from QAC (Queens ATR Chapter). All teachers (ATRs, newbie cutie teachers, regular teachers, Sp ed teachers) were not given name tags at last week's Queen's teaching hiring fair. YES, you heard me correctly. We were not given name tags instead we were handed a tag with our salary on the tag. I have never ever in my life seen anything more unprofessional than this except when I joined the DOE. This was a new low. Therefore, we are hoping QAC supports our unanimous vote. One principal called me Mr. 100k and asked me if I am willing to teach Chemistry and Physics. I pretended to speak no English at all and nodded very quickly. He attempted to go to another candidate at the table but I was not going to let him off the hook that easy. Long story... OH SHIT, my principal just walked in again and saw me posting messages. shit shit shit... now she wants me to meet her again at 9:15 a.m.

After spending years in the rubber room at several district offices, I actually got to meet many of these high level bureaucrats you speak of. Most of them are very nice people. Whether they actually do any meaningful work is another story altogether. The pedagogical team included people with little teaching experience who arranged PD documents which simply regurgitated the same drivel year after year. The HR team stared at computers all day reviewing meaningless data, complaining openly about how incompetent the principals are in their districts. Across the board on any given day, at least half the people I observed spent their days chatting on Facebook or shopping on Amazon.

Best of all, many of the senior instructional supervisors privately confided in me that there were many instances during their teaching years when they could have easily ended up in the rubber room themselves and charged under 3020a, and only avoided it by the skin of their teeth because nothing more than good luck!

Okay, ok! Just finished meeting with principal about posting on Chaz's blog during my work hours. I explained to her this is a professional blog for educators where we need a strong principal to support us and get us PD hours from the state if we blog enough hours. She didn't really buy into it but promised me she won't call investigators and/or give me a file letter if....

In response to 3:41. You're right on. In my school they have students taking Regents exams in 90+ weather in hot rooms. I was watching a gameshow from the early 70s and they gave away an air-conditioner as a prize. It's sad that they were giving away air-conditioners 50 years ago, but they still can't air condition the schools. Then they wonder why the students don't do well. I know last year during the ELA Regents a lot of students left out part 3 because it was just too hot. You wouldn't have an administrator's meeting in an unair-conditioned room would you? So why is it all right for the kids. Also, today they were giving the AP Lit exam in my school's library. I peeked in the window because I knew a lot of the kids. I saw a teacher or someone else typing on a computer in the corner. Another teacher was walking through the library, a para was on another computer and 3 teachers from another school went into an office in the library. Would you be able to take exams under these conditions. I can't stand when administration and the d.o.e. says they care about the kids when they really couldn't care less about them.

@10:20 ... Tis so true. After spending 3 stints in 3 different rubber rooms I can honestly tell you that many high level bureaucrats are decent people and understand the system. They know firsthand how much of a joke this broken system really is and always will be. You can't fix stupid and you can't fix this system. Similar to the prison system - you do your 25 to 30 years and pray you are alive when you get paroled. There are people like Carmen or Doritos Gibson who think they are above us and much better than us but in reality most people know this is one big joke. Nobody is changing anything except their diapers one day.

For example, my ATR supervisor came back raging and yelling. She was not happy she wasted time doing a pre-observation and an observation with a teacher who pretended to be me. She pointed her finger at me and was very nasty. I asked her if she wanted water or something to drink. She yelled "NO, Just show me your lesson." I said before I do that "can I ask you how you ended up as an ATR AP?" She was about to say none of your business when I interrupted her and said, "please tell me". She started telling me how she was a young star teacher who was selected to go into administration by an elderly principal. She became an AP and was shining until her school was shut down. She started to cry. I held her hands and got her tissues. She cried. I cried. She laughed and I laughed. We were like a hyena and a lion sitting there and chatting. Two enemy soldiers wounded in battle sitting next to each other healing each other's wounds.

We stepped out for lunch arm in arm. On the way back to the building she said I will email you your observation. Just change the name and date and add whatever you like. I do not need to come back.

The lawyers are also taking a huge amount of the budget going after experienced teachers.

The charter schools are watching like the devil in the exorcist sitting on the side of the bed hoping for death. Don't let the devil come between us all - vote UFT all the way baby otherwise hire a priest for an exorcism to rid the betsy devos's of the world and their charter school hell. Avoid the fire stick with the UFT do be a soldier for the Koch bros. Peace out.

They want to replace older teachers with new ones.

We have investigators that do not investigate any wrong doing by Principals like Dwarka.

In my school there is a teacher who has gone to professional development for two days in a row each of the past three weeks. What a waste of time.