DOE's Children Last Program Cobtinues -it's About The Money 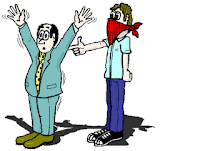 There is a discussion going on in District 75 that the DOE wants to reduce it's size or even eliminate it. For the few people who don't know what District 75 is, it's the special education district. Therefore, this district is a very expensive part of the DOE since special eduction students need more and expensive services.

Already the DOE has proposed separating the deaf and blind program from District 75 and give it to the local school principals.
Now there are discussions about removing site 7 & 8 students from District 75 and send them to the local schools. What's interesting about sending the site 7 & 8 students back to local schools is that these students were sent from these very same schools because of their emotional disabilities. Why would they do better back in those schools from which they were sent from?

Makes no sense? Why bring students who were in a self contained restricted environment into a less controlled environment which they couldn't handle it previously? The reason is money. It can cost almost three times the expenses than for the general education student. Therefore, if you can dump these District 75 students into the general education population you can save money. So what it may cause classroom chaos with these special needs students getting frustrated and causing disruptions in the classroom. True, some special education students can be mainstreamed. However, at present, that is a case by case basis. not the proposed mass inclusion of these students.

I hope that District 75 doesn't follow the fate of District 79 and I don't believe it will. However, look for Tweed to squeeze any money it can out of the schools and if it hurts the children? So what, it is the DOE's children last program.
Posted by Chaz at 10:07 PM

I'm all for children being placed in the Least Restrictive Enviroment, but there is a reason that these children were placed in alternative settings- and that is due to not only their extreme emotional disturbances, but also to their aggressive behavior. Heaven forbid district 75 is dismantled- to do so would be disastrous to both the special education children that the district serves, but also to the children that are placed in classrooms with severely emotionally disturbed children (can anybody say "lawsuit"?