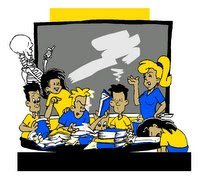 Here will go again. The DOE was told to cut the budget and instead of getting rid of highly-paid consultants, F status do-nothing administrators, or reduce managerial overhead, they have demanded a 1.75% cut of the school budget. Now a 1.75% budget cut may not sound like much. However, the budget cuts result in higher class sizes, fewer enrichment activities, and a vastly reduced after school program. Worse, many schools will have to fire teachers and combine classes. Children first? Try children last.

The school budget cut is as high as $400,000 in the big high schools and is going to be painful to students and staff alike. However, the DOE has decided to protect their cherished programs and the high salaried people running it. Therefore, the school budget cuts rather than managerial overhead reductions.

Remember, under Kleinberg there are thousands of ATR's who should be in the classroom teaching. Instead, Kleinberg encouraged principals to hire inexperienced (and cheaper) teachers causing the DOE to pay these ATR's for doing day-to-day substituting. This is a waste of between 100 & 200 million dollars a year. Further, add the nearly one thousand teachers removed or doing clerical work while waiting for 3020-a charges and you have another 60 million dollars wasted. While some people should have 3020-a charges filed most do not and having them detained in "rubber rooms" for over two years with full pay is a terrible waste of talent and money.

I can only hope that Randi & gang stop with their talk and start acting, like filing a lawsuit Of course I'm not holding my breath for that to happen,

P.S. Sorry about my blogger links I tried to update them and lost them all. I tried edit me and nothing doing. Anybody have any suggestions?
Posted by Chaz at 12:06 PM

Randi paid a visit to my school this week. She held court in the teacher's cafe for a period. N announcement was made regarding her visit so most teachers did not even know she was around. Most people ignored her while she spoke and she did not address any relevant issues.