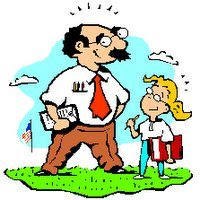 I was e-mailed this very cute comparison between the public schools in 1957 and what they are like now. I hope you enjoy it as much as I did.

Scenario : Jack goes quail hunting before school, pulls into school parking lot with shotgun in gun rack.
1957 - Vice Principal comes over, looks at Jack's shotgun, goes to his car and gets his shotgun to show Jack.
2007 - School goes into lock down, FBI called, Jack hauled off to jail and never sees his truck or gun again. Counselors called in for traumatized students and teachers.

Scenario: Johnny and Mark get into a fistfight after school.
1957 - Crowd gathers. Mark wins. Johnny and Mark shake hands and end up buddies..
2007 - Police called, SWAT team arrives, arrests Johnny and Mark. Charge them with assault, both expelled even though Johnny started it.

Scenario: Jeffrey won't be still in class, disrupts other students.
1957 - Jeffrey sent to office and given a good paddling by the Principal. Returns to class, sits still and does not disrupt class again.
2007 - Jeffrey given huge doses of Ritalin. Becomes a zombie. Tested for ADD. School gets extra money from state because Jeffrey has a disability.

Scenario: Billy breaks a window in his neighbour's car and his Dad gives him a whipping with his belt.
1957 - Billy is more careful next time, grows up normal, goes to college, and becomes a successful businessman.
2 007 - Billy's dad is arrested for child abuse. Billy removed to foster care and joins a gang. State psychologist tells Billy's sister that she remembers being abused herself and their dad goes to prison. Billy's mom has affair with psychologist.

Scenario: Mark gets a headache and takes some aspirin to school .
1957 - Mark shares aspirin with Principal out on the smoking dock.
2007 - Police called, Mark expelled from school for drug violations. Car searched for drugs and weapons.

Scenario: Johnny falls while running during recess and scrapes his knee. He is found crying by his teacher, Mary. Mary hugs him to comfort him.
1957 - In a short time, Johnny feels better and goes on playing.
2007 - Mary is accused of being a sexual predator and loses her job. She faces 3 years in State Prison. Johnny undergoes 5 years of therapy!

As funny as the comparisons are, it's unfortunately true and an example of our public schools today.
Posted by Chaz at 5:54 PM

I just wanted to make sure that you were invited to our education "Blogger Summit". We hope you can make it and feel free to share this invitation with any other bloggers in the area that might be interested. The invitation is attached below.

Strong American Schools is excited to announce the ED in '08 Blogger Summit. Conference details are as follows:

An opening reception is scheduled on the evening of Wednesday, May 14th. Cocktails and hors d'oeuvres will be served before the screening of a new documentary film on education, Two Million Minutes. A Q&A session with the filmmakers is set to follow.

Then join us for an all-day conference on May 15th. Nowhere else will you have an opportunity to meet and network with fellow education bloggers, participate in panels, attend workshops, and help tackle some tough questions on the state of education in America.

Space is limited, so be sure to RSVP today!

This is great! These examples are exactly the flaws DetentionSlip.org are trying to expose. Those not directly involved with the current state of education do not realize how ridiculous it's become. And we wonder why it's hard to find quality teachers.

Love your blog and I had added it to mine. However, it seems to me that your blog is more of an informational blog rather than a teacher-friendly one. Still it doesn't take away the enjoyment that I have reading it.