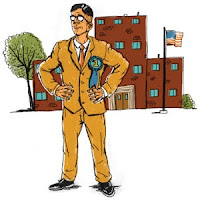 Many of the Principals that graduate from the so called "Leadership Academy" have brought down the profession and have worsened morale in the schools they control. However, I must bring up one of these principals that have turned the corner and in his second chance to be a Principal has made my Hall of Fame as he worked hard to become a quality Principal . The Principal is Carleton Gordan who's first assignment after graduating from the "Leadership Academy" was given a Brooklyn school with a challenging population to turn around. Like many of the "Leadership Academy principals" he only made things worse by blaming staff, caused a high teacher turnover rate, and allowed student discipline problems to go unchallenged. He was eventually removed and this might have been the end of his career as a Principal in the New York City schools. However, Mr. Gordan was given a second chance and in 2004 he become Principal of IS 59 in Queens. In the next few years he took the school from confusion to collaboration. He was credited with working with the staff to improve the school culture and morale. Parents, students, and teachers all sang his praises and few teachers left the school.

How respected was the Principal? Teachers would not take a union representative with them to meet with Mr. Jordan (not a good idea by the way). Furthermore, he investigated any allegations in-house and took appropriate action when necessary without calling in the anti-teacher investigative units that could result in unfair teacher removals and a loss of instruction to the students. For him the collaterial damage to students due to a loss of a good teacher was the most important factor not how he felt about the teacher.

A few years ago in a special education high school class a substitute teacher overheard a conversation between two students about a teacher in IS 59. The substitute teacher reported the conversation to the high school Administrator who called in OSI to investigate the teacher. Despite obvious flaws in the investigation, gross inaccuracies of time and place, and Principal Gordan's insistence that they were barking up the wrong tree, the Office of Legal Services sent the teacher to the "rubber room". The investigation ended up with the teacher being arrested and stood trial. After the jury heard all the evidence and inconsistencies, it took the jury a full 22 minutes to acquit the teacher. Yes! You have read it right 22 minutes! The Principal not only testified about the teacher's character, but explained the obvious inaccuracies of the student statements and allegations of the situation. When the prosecutor realized that the Principal was not answering the questions the way he wanted, he asked why the Principal was dong this. The Principal's response was to say "do you want me to lie? This is about the truth right"?

Believe it or not the teacher is still in the "rubber room" facing 3020-a charges on the same incident and one of the DOE's star witnesses against the teacher is? You guessed it Principal Gordan. Good luck DOE you are going to need it.
Posted by Chaz at 4:29 PM

My old school had a horror for 5 years from the Principal's Academy. When she left she was replaced by another LA grad and people felt there was going to be no respite. But she has turned out to be great. When I stopped by the teachers all looked 10 years younger.

In all fairness some principals should be complemented for their working with staff.