"Here Comes The Clowns" - The Legacy Of The 2005 Contract - Part 3: Giving Up Time And Days That Cost Us Dearly. 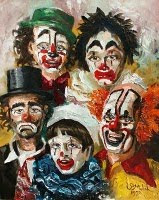 In my continuing series of the awful "givebacks" that our union handed to the City in the terrible 2005 contract., I have zeroed in on the amount of time and days we were forced to give back in exchange for a raise that barely beat the City inflation rate.

First, we were forced to work an extra 37.5 minutes, almost an extra period, by working with the most needy children who stayed after school. While I do not have a problem with working with a select group of children (a maximum of 10), I do have a problem how administrators would stuff 20 children with two teachers in each classroom and think that they can actually observe you in the process. A far different situation than Randi Weingarten said it would be. Randi claimed the extra 37.5 minutes would be used as "office hours". Meaning students would make an appointment with the teacher to work on specific issues in the allocated time. This became a 10% increase in a teacher's work day and this increase in time should have resulted in a 10% increase in pay annually by itself. Of course it didn't even come close.

Next, we also gave up the two days before Labor Day and if you work in Brooklyn and Queens, a third day. To many teachers, giving up the two days before Labor Day was unacceptable and now we find out that the two days equal 0.58% of a salary increase. This is the reduction in whatever pay raise we get in the next contract. The question is why would our union give up these two valuable days for a mere 0.58% in the first place ? This is yet another question that our union has failed to answer.

This one was worse than you said.

And on top of it,
1. we create a fifth pension tier (an extra way to divide beginning and experienced teachers
2. we delay health vesting from 10 to 15 years (have you talked about that with any Fellows who are starting at age 50 or more?)
3. we delay regular vesting from 5 to 10
4. the TDA that you mentioned.

#1 is huge. And, it was sold with a lie. We were already paying, dollar for dollar, for the return of those days. And, the explanation that the City needed to save money? #1 won't give them an extra dime until 2020!

It would seem from so many union members that I speak to tell me that they didn't vote in favor of that contract.

The answer is easy. First, the elementary school teachers voted for it overwelmngly because of the money.

Second, near retirees, who were Tier 1,voted for it for their pension.

Finally, the union pressured the CL's to get their staff to vote for it.

The people who favored the 05 contract are like people who believed some mobsters telling them, "Believe me, it is all win win, you got to pay nothin' back" and after they have wasted that money which was not much, they have two goons, standing outside, and now, the gullible people feel intimidated, they feel deep inside that they have royally messed up. Good for them.

The primary school teacher ought to watch their backs as they feel so untouchable and yet, those Goons will be targeting their schools, sure secondary schools have always underperformed but with the overwhelming majority of the schools that have closed so far being secondary school, where do you think these destroyers of school will turn?

Chaz, Therefore, blame the elementary school and the Tier1 teachers for making the middle and HS teachers miserable.

Is it possible to negotiate a contract where it's not an umbrella contract? This is what happened to the teachers in middle & HS. We ended up with the short-end of the stick and the members need to realize that they should not vote for a contract that will bring about a negative quality-of-work effect.

I wonder if the elementary school teachers would be annoyed if the middle & HS school teachers voted for a contract to get rid of their only prep and their prof.act. would always be small group instruction for a raise across the board.

They would raise crazy hell! Yet, didn't they realize what they did to us?

With some exceptions, many of the elementary school teachers are clueless of the importance of the working conditions, Their world is the school and follow their equally clueless CL who follows what "Unity" tells them to do.

Chaz
I don't know how you can be sure the elementary school teachers were the ones. I was at the count and there was no way to tell. Unity sent hordes of people into the schools to sell the contract and threaten them with a striker if it lost. ICE and TJC went out full force in organizing opposition to the contract (New Action's 2 negotiating committee members voted for the contract allowing Randi to announce at the DA that the vote was unanimous- the DA voted over 70% in favor- ICE and TJC held a rally in front for that meeting and hundreds of non-delegates came out including a number of elem teachers. Many more elementary school teachers were with us and a bunch joined is at out rally at UFT HQ a few weeks later - boycotted by New Action by the way.

We put out 40,000 leaflets to try to counter the Unity machine and hit as many schools in the city as we could distribute to. The 37% of the teachers (Higher for the functionals) who voted against was significant considering the Unity onslaught.)

Traveling ATR said...
This comment has been removed by the author.
9:26 PM

Norm, of course I can't be sure. However, my interactions with various teachers lead me to that conclusion.

Thank you Norm, I thought I remembered hearing "if we don't agree then we will be forced to strike." I know I have a bit of dementia , but that was the carrot they dangled in front of us. When I complained about the "open market" I was told not to worry. The merit pay slipped right by me as I am sure it did for many in the trenches!