"Here Comes The Clowns" - The Legacy Of The 2005 Contract - Part 1: Elimination Of Seniority Transfer Rights 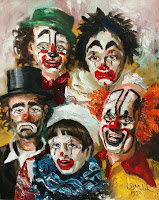 This is the first part of a five part series on the damage the 2005 contract did to the New York City teaching profession and the lasting impacts that affect us today. This series was sparked by a "Unity" member telling me why I should vote "Unity" since they are experienced in negotiating with the City. I reminded the "Unity" member about the terrible 2005 contract and was met with a blank stare. I also told him that these "bunch of clowns" at "Unity" have permanently hurt the teaching profession.His response was "really"? "I didn't know that"? Therefore, it is time to remind people of the 2005 contract disaster that has made an older and highly-paid teacher an endangered species. Part one of this series deals with the elimination of the seniority transfer rights.

Prior to the terrible 2005 contract, principals were required to list half of their openings and teachers from other schools with seniority could bump "newbie" teachers out of these vacancies. During this time all excessed teachers must be placed in the subject area before principals would be able to hire a "newbie teacher". Finally, teachers who were from closing schools were given priority in placing them in the available vacancies. All this changed in October of 2005 as our crack "Unity" negotiators sold out the members by eliminating seniority transfer, bumping, and the ending of priority placement of teachers from a closing school. The result was an explosion of excessed teachers, many of them older and highly salaried. This explosion of excessed teachers is now known as the ATR crises and it is expected that in the next school year there could be 2,500 ATRs because our union gave up the cherished seniority transfer rights.

The union after first denying the problem existed. Then they thought that Tweed would wary of paying 60 million dollars annually for the ATRs. Finally the union realized the folly of their ways and tried to negotiate with the DOE and came up with the ATR agreement which the principals have widely ignored. Now it is projected that there could be 2,500 ATRs and more if the State cuts the budget This could cost the DOE upwards of 100 million dollars annually,

Now "Unity" wants me to trust them with contract negotiations after they caused the ATR crises with there inept negotiations with the DOE back in 2005. Maybe I would feel better if there were new leadership but the very same cast of characters that were responsible for the 2005 contract are in the very same positions except for one or two. I just dread what wonderful "givebacks" that our union has in store for us in the next contract. Hopefully, a new world order will appear and our union will hold the line. However, I will not hold my breath waiting for it to happen with these "bunch of clowns" running the show.

Thanks to ednotes online for the use of the picture.
Posted by Chaz at 5:38 PM

I have been trying to figure out a place to begin the acai berry free trial and was just wondering if anybody had some thoughts on whether or not it works for weight loss? So far here is the 1 [url=http://creditreport.vox.com/library/post/acai-berry-free-samples_-how-to-get.html]article[/url] I have been able to read that seemed real for the goals I have. Thoughts?

By 2004 a significant number of schools were participating in SBO (School-based Option) transfers. Seniority transfers were already becoming less common, and open to fairly noxious DoE manipulation. But both systems that were running, SBO and Seniority, gave teachers and the UFT some control over the process.

I think you might still recall, I argued at the time that maintaining some sort of union control or oversight was paramount... Beyond that, I wasn't particularly concerned what form the transfer system took.

Even now, I take issue with the headline. It was the loss of union oversight rather than the loss of seniority transfers per se that did so much damage. If we had SBO systemwide, that would be far far better.

It wasn't until three or so years later that I first heard James (I think at a DA) address union control or oversight of the transfer process. And it is where we need to push.

Here are some ideas towards that end I raised almost exactly a year ago: For an end to the Open Market in the NYC Dept of Education.

"This would be consistent with some of the louder opposition (ICE) being openly opposed to SBO transfers just months earlier."

Why not actually out in a link if this is true? I have no memory of ICE ever opposing SBO transfers but then I may be getting old. However, this is nothing new coming from a member of New Action who has a dog in the race.

About half of NYC's public schools were using SBO.

Klein insisted in ending it. No discussion. It was a rock bottom demand, I've been told by someone in a position to know. He wanted principals to have unrestrained authority to pick transfers and hires.

I don't think that he knew much about SBO, or had spoken to principals about how it really worked. Heck, I wonder if he even knew that it was NOT primarily seniority based.

didn't you mean "their" instead of "there"?

To me the elimination of seniority transfer rights directly led to the the ATR crises.

Klein started out by attacking seniority transfers by claiming they drained experienced teachers out of ghetto schools. That tune soon changed into an attack on these very senior teachers.
I knew people were in trouble when I heard Randi at a city council hearing not defend the seniority transfer rule but agree with Klein that it should be ended.

Relatively few teachers took advantage of these transfers and there were a number of restrictions. Teachers had to choose 5 schools and could get one of the choices. If they didn't accept they could not put in for it for 2 years again. And many principals were able to hide positions.

Most transfers were for the purpose of easier travel. Many teachers started careers in high need districts and lived in the city. As they married and had children they moved to suburbs - LI, Jersey and Staten Island and Westchester - and their commute became heavy.

I remember that the Jersey/SI commute became worse and worse and people who worked in Williamsburg and Bed-Stuy tried to get into Staten Island schools but had to often wait a decade. Yet these SI schools were often filled with young teachers. How did that happen?

Other teachers just felt worn out by some of the constant battles in difficult schools and felt they had to get to a better place. Many received 2 years credit for one for the purposes of these transfers for working in supposed "combat" zones. Still, in my school, most stayed. I can think of maybe 5 teachers who took a transfer over decades - and some of them ended up regretting it - a few came back. One was given a school in Manhattan where she lived but when she went into see the principal there was such hostility she gave it up. And she was one of the best pre-k teachers we ever had. She finished her career in my school.

While there were always cases of lousy teachers being foisted on some schools, there were also many teachers who worked in tough schools finding themselves in country club schools when they took seniority transfers. They couldn't believe how relatively easy teachers in these schools had it. Reports filtered back that they eventually were viewed even by skeptical principals as amongst the best.

As SBO schools grew, the transfer options shrunk. The UFT used this argument in selling the point but soon after, Klein dumped SBO - another episode of UFT OUTFOXED and OUTFLANKED.

Oh, and I'm just waiting for certain bloggers to accuse ICE of committing war crimes because they saw an ice cube in some war criminal's drink.