Michelle Rhee - Worry About Your Own Failed Administration And Schools. Mind Your Own Buisness When It Comes To Negotiating Our Contract. 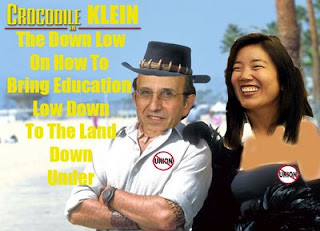 The Chancellor of the failed Washington D.C. school system, Michelle Rhee, has stuck her feeble mind into the complex New York City contract negotiations in an opinion piece for the New York Daily News which only shows how out of touch and clueless she is to the New York State Civil Service laws. Michelle Rhee who once worked for the DOE and is a protege of Chancellor Joel Klein has inserted her idiotic ideas in how to negotiate a new contract for us. Fat chance that is going to happen. Both Accountable Talk, Perdido Street School, and Ednotes online have also commented on Michelle Rhee's article and are must reads.

Michelle Rhee, who is funding teacher raises with private funds (a very dangerous practice and may not be a recurring stream of funds in the future, then what?) has just about eliminated teacher tenure. Under the Washington D.C. contract an "ineffective teacher" can be fired immediately and a teacher that is "minimally effective" would have their pay frozen and can be fired after two years. The Chancellor claims that the Principal must work with a school committee before a teacher is rated but we all know it is just a "fig leaf" that will allow the Principal to do what he or she wants to, regardless of the teacher effectiveness. The Washington D.C. contract also eliminates seniority for determining layoffs and gives the Principal total discretion on who to lay off. Furthermore, she wants to fire all ATRs as if it is their fault that they can't find jobs. She ignores the "fair student funding" fiasco or the age discrimination issue in the ATR crises. Just blame the ATRs and fire them all. Finally, she recommended that Randi Wiengarten help negotiate the contract (I would think Michael Mulgrew must be throwing up when he read that). I can just see Randi Wiengarten agreeing to another disastrous October 2005 contract and Randi proclaiming that everybody wins as Leo Casey insults teachers that dare to disagree.

I could not help but see her lack of criticism of the bloated Tweed budget, the no-bid contracts, the high-priced consultants that inhabit the Central Bureaucracy, and the lack of educators in decision-making positions. I also laughed at her praise of the two year wonders from Teach For America. Then again she is one of these ed deformers who care more about control then the students.

Chancellor Michelle Rhee, "mind your own business". This is New York City not Washington D.C. You have enough trouble managing your schools.
Posted by Chaz at 6:15 PM

Her comments sickened me but the audacity of Weingarten to go along with her! She needs to be tarred and feathered or amybe the union should publicly try her for treason.

All of these twisted, deficient, sorry human specimens (rhee, klein, duncan, bloomberg, weingarten, et al.) are participants in the effort to:

2. Torment, and in some cases, slowly kill fellow human beings;

3. Get their various jollies through feeling more important and powerful than other people;

4. Make a good deal of money in ways that grievously harm and damage other people;

5. Build an "education" system that is more accurately a fascistic, totalitarian re-education system in which people are physically and otherwise coerced into serving those who consider themselves the masters;

6. Destroy the ability of everyone not part of the cabal to think, reason, evaluate, analyze, organize, and hence resist the brutal actions of the would-be overlords.

No action of any one of the people who hurt us is isolated; all is premeditated, interconnected and purposeful.

If we in NYC could organize ourselves as the teachers have done in Chicago, we could win back our lives as educators in this city.

Brilliant S, probably the best thing Ive read about this EVIL regime . . . this is about way more than education of "the young people"

Chaz-- You chose the perfect title for this post. For all the problems NY teachers are facing -- we should blame Randy W. She is the one who sold us out.
I was rereading the UFT ATR AGREEMENT (or RW Agreement) which is copied at the bottom and realized that this agreement is going to end on NOVEMBER 15, 2010. What is going to happen with all the ATRs and excessed teachers -- Nobody will give jobs to them because the INCENTIVE OR BONUS THAT THE DOE PAYS WILL FINISH. (Read carefully CLAUSE #5).

Wednesday, November 19, 2008
MEMORANDUM OF AGREEMENT: Absent Teacher Reserve and Vacancies
Memorandum of Agreement entered into this _______day of November, 2008 by and between the New York City Board of Education (hereinafter “DOE”) and the United Federation of Teachers, Local 2, AFT, AFL-CIO (hereinafter the “Union).

All terms and conditions of the current collective bargaining agreements between the parties remain in full force and effect. This side agreement assists in using talent and resources more effectively:

READ THE REST OF THE AGREEMENT AT THE UFT WEBSITE.