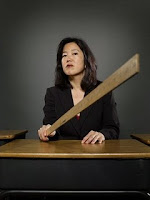 Randi Weingarten has done it again. Another case of Randi Weingarten negotiating teacher tenure and due process out of the Washington D.C. teachers contract. The Washington Post reported that Chancellor Michelle Rhee has used the newly implemented contract negotiated by Randi Weingarten to fire 241 teachers or approximately 6% of the entire teaching force. In addition another 737 teachers were told they were "minimally effective" (sound familiar? Look here) and could be fired next year. That means an additional 15% of the teaching staff are in danger of being terminated. In the New York Times, their article further reported that Randi Weingarten was quoted as saying the following.

“Evaluations should include a component of student learning, of course, but there also has to be teacher development and support,” Ms. Weingarten said. “It can’t just be a ‘gotcha’ system, like the one in D.C.”

I admit Randi talks a good game but it is the results that count. Just remember what Randi Weingarten did to us in the infamous 2005 contract and every time she negotiated with Joel Klein, the teachers suffered. How about the following? The "fair student funding" fiasco, recruitment over retention, the ATR and "rubber room" agreements, PIP+? Do I need to say more?

Randi is gone but not forgotten as her legacy that makes the NYC classroom an increasingly hostile environment and the teaching profession under continuous attack as creativity is no longer encouraged and a "one program fits all" is followed at the expense of the students.

It is worse than that.
Don't forget that Randi has had a hand in making sure the Wash teacher union election was cancelled/postponed to keep Nathan Saunders who was opposed to the contract from getting elected before contract was ratified.

This is the highest level of duplicity. And also check Detroit and Chicago. I guess things are just not bad enough in NYC for there to be a critical mass of activists. But time is coming.

Actually, with the new rating system in NY State, what happened in DC could easily happen here.

At the risk of sounding paranoid, Weingarten is in effect, if not intent) a double agent for corporate ed deform.

The proof is to be found in what she did in Colorado. In NY, DC, Detroit, New Haven, etc., she can at least say that she was formally representing the people affected by the contracts she negotiated. In Colorado, however, she parachuted into a state with very few AFT members and helped the deformers eliminate tenure, tenure that was held by teachers represented by another union.

While it's often pointless to psychoanalyze those in positions of power, I think she will send us all to the poorhouse with her need to have the approval and acceptance of the Overclass. The rest of us, as Alan Simpson said, are mere "lesser" people.

Either that, or she's just on the take.

I am still baffled by those teachers in Colorado who voted in favor of giving up tenure for a bad contract. Do I have this wrong? Can Randi negotiate to eliminate tenure without the teachers' input or say-so? Please clarify. I always look forward to your input.

We all need to push back on the Obama, Duncan and our respective school district leaders BS! Obama is carrying the Bush NCLB mantel. With all the "accountability" eggs put in the vicious treadmill of high stakes testing under NCLB, the process is never questioned. The will bash teachers as they have done and use the scores to push us out of our jobs.

Duncan is trying to stifle criticism by announcing he will have a "commission" to address the issues brought to the fore by the real reformers. He is going ahead with his plans to privatize education while he tries to buy time. In Chicago, he did this all the time and did nothing to address the concerns of teachers. Duncan has no integrity.

We are watching Randi and her "heir apparent" Mulgew's actions from Chicago as well!