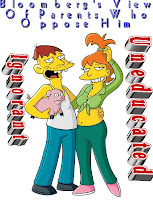 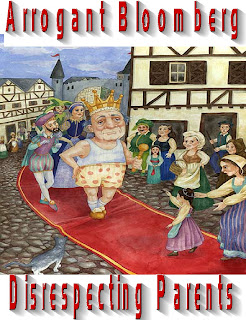 Well, the world did not end and it is back to writing about education. I read with amusement how the Imperial Mayor, Michael Bloomberg, has now publicly "disrespected parents". It was bad enough that under his proxy, the ex-Chancellor Joel Klein, parent voices were ignored and the Mayor could claim that he was working on giving parents a voice in the education process. Now that Joel Klein is gone, the arrogant Mayor's true feelings about parents are out in the open.

To the imperial Mayor, New York City parents are simply ignorant people who had no education, except for the minority that agreed with him. How could he allow these peasants any real voice in their child's education when they had the audacity to disagree in his view of education? In the Mayor's view he knows what was best for the community, not the people who actually live there and if his staff recommended a community school to close, so be it. It is more important to establish "Charter Schools" in those buildings rather than supply the resources and energy necessary to improve the neighborhood schools. Left behind, are the academically struggling students of the neighborhood who the Charters" encourage not to apply to or counsel them out of. The English Language Learners, Special Eduction students, Disciplinary or Attendance challenged children "need not apply" and are sent, in mass to another school which puts that school in danger of closing. Is it any wonder that parents want to keep their community schools open and keep that precious connection with the neighborhood intact?

Now the Imperial Mayor has publicly blasted the parents whose children either go to these closing schools or are in the community as "ignorant and uneducated". In other words just like Cletis and his wife as portrayed in the Simpson's cartoon program This imperial billionaire Mayor could never understand what it is to struggle with poverty, live paycheck to paycheck, or to be part of a larger community (excluding his country club friends). In the Mayor's world there is the privileged like himself and the peasants who bow and follow his imperial decrees. However, it appears that the Imperial Mayor has no clothes and the peasants are revolting with his lowest approval ratings ever (36%). Even the formerly loyal City Council is ready to go against his budget in a big way as he has painted himself in a corner with 4,100 teacher layoffs, the closing of 20 firehouses, and his grossly increased spending on technology and consultants.

Mayor Bloomberg's arrogance appears to show no limits as he follows his imperial legacy at the expense of New York City and the people who live in it. In his view the "operation was successful even if the patient died".
Posted by Chaz at 9:35 AM

How true. It appears the Mayor has lost much of his support in the City. Do you notice how quiet the education reformers have been lately?