Will The New York City Council Stand Up To And Checkmate The Bully Mayor? We Will Soon See. 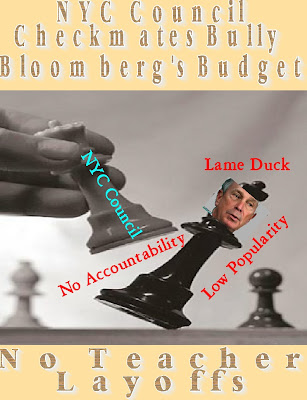 I was at the highly successful union rally yesterday and saw eight New York City Council members join the protest. Most importantly, was what the Education Committee Chairman, Robert Jackson who said there will be no layoffs on his watch. He further stated that despite the absence of City Council President, Christine Quinn, she also supports no layoffs. If true, it looks like the Mayor's proposal to layoff 4,100 teachers appears to be checkmated. If Christine Quinn is really on board (her absence from the protest is somewhat disturbing) with the majority of the council members it would mean that the "lame duck" and increasingly unpopular Mayor would be in deep trouble since none of these council members would want to go into a campaign for reelection while voting for teachers layoffs, larger class sizes, and hurting the children's academic achievement. This is especially true for politicians who have on the eye on being the next Mayo, such as Christine Quinn.


It looks increasingly likely that the City Council will not approval teacher layoffs and instead demand that Mayor Bloomberg use the $3.2 billion dollar surplus and or cancel the outrageous computer and consultant services that in the DOE will increase by an astounding $1 billion dollars! This does not include the $300 million dollar surplus the DOE had mysteriously made disappear.

The only chance Mayor Bloomberg has, is if he can get union concessions on seniority-based layoffs, known as "last in, first out" or LIFO. My understanding is that the union is not negotiating with the City under this hostile political climate and will lobby the City Council to eliminate the teacher layoff threats and look for savings elsewhere. Let's hope the union does the right thing and calls Bloomberg's bluff and not negotiate under any circumstances. Waiting Bloomberg out is the correct approach and until he gives us the "City pattern" first. Then and only then, should the UFT start negotiations with the bully Mayor on any other issues.

I know my picture is optimistic but it appears it is becoming increasingly real. I do hope my picture becomes the truth by the end of the school year.
Posted by Chaz at 5:15 PM

Ms. Quinn is also a lame duck. It doesn't surprise me at all that she wasn't there. I agree that the union should stay firm. It never pays to try and make a deal with the devil. The City Council will probably stand up to the Mayor, because they are hopefully smart enough to realize, that despite the barrage of pro Bloomberg, anti teacher, anti union propaganda (pseudo editorials, pseudo articles and advertisements) people are disenchanted (that's putting it euphemistically)with the greedy tyrant.

Also, to put it bluntly, their political asses are on the line.

Someone sent this to me.What do you make of it?

This was fowarded from the administrators' union:

"Hiring Freeze Follows Layoff Threat
Based on the Mayor's Executive Budget with its threat of thousands of teacher layoffs, the DOE has announced that a hiring freeze will be introduced immediately on all personnel transactions, including requests for license changes and changes to service history affecting seniority. No such requests should be submitted while teacher layoffs are being considered."

It means the teachers with the least seniority are screwed since the Principals cannot shift them into shortage areas.

Hiring freeze at the consultant and data analysis operations???

The City Council will show its moxie:
as to whether it stands up to the bully mayor and refuse him funds for consultants and data analysis: will it force spending for teachers instead of data-crunchers?

This budget crisis will deflate once we put a halt to the wasteful mania for consultants and 365/24/7 data analysis.
New York City Eye --WE ARE ALL WISCONSINITES NOW: "Cutback Consultants, Save NYC Teacher Jobs"