I Nominate Mayor Bloomberg & Chancellor Walcott For The Knucklehead Award As They Lose $58 Million Dollars In Their Ill-Conceived Turnaround Policy. 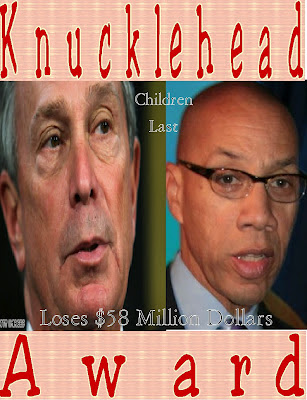 I have nominated Mayor Bloomberg & Chancellor Walcott for the "knucklehead award" for their risky and ill-conceived  "turnaround policy" that was thrown out by the Arbitrator.  The "turnaround policy" was a result of the Mayor having a temper tantrum when he failed to get his way on the  appeal process and stopped negotiating with the teachers' union.  In fact the Chancellor unwisely ordered the DOE negotiators to cease negotiating with the teacher union on the teacher evaluation system that resulted in the impasse we have presently..

It was at this point that the Mayor and Chancellor decided to follow through with the "turnaround policy", despite deep reservations from many education observers had about the strategy. including the State.  These education experts questioned the City's version and the many adjustments to the federal requirements that are required for a school to qualify for "turnaround". However, the Mayor and Chancellor refused to listen to these education officials and selected 33 schools for the City version of "turnaround".  Interestingly some of the worst schools were spared "turnaround" because of political reasons an example was Boys and; Girls high school which is one of the worst schools in the NYC system and was given an "F" on the DOE's report card.

The union took the City to court and to Arbitration and in Arbitrator ruled that the City's "turnaround policy" was simply a method to get around collective bargaining rights and get rid of unwanted staff.  In fact the Arbitrator used the Mayor's own words against him as the basis for his decision.  Now the City had to tell the new principals that they must rehire the teachers they wanted to get rid of.  If morale was bad before what will it be for the 2012-13 school year where teachers will be looking over their shoulders waiting for the Principal to "U" rate them.  I foresee chaos at these schools and all because of the ill-conceived and vindictive policy by a Mayor who did not get his way.

For the Mayor and Chancellor it is "children last"....always. as they lost $58 million dollars and put the 24 schools into utter chaos and that is why they are worthy nominees of the ":knucklehead award".

One of the Turnaround principal principals got busted for meth possession in his car!

I bet he will not be brought up on 3020-a charges since he knows low people in high places.