The Emperor Loses A Big One And Gets Royally Screwed As The Independent Arbitrator Strikes Back. 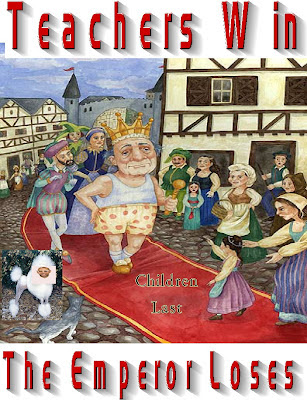 The arrogant Mayor, Michael Bloomberg, lost a big one on Friday when the INDEPENDENT ARBITRATOR  ruled against the City on the Mayor's and Chancellor's sham "turnaround" proposal. The Arbitrator ruled that the City could not impose the "turnaround model" without following the Federal and State requirements and since the City had stated that  they will do their own version of the "turnaround model" the Arbitrator ruled it violated the contract with both the UFT and CSA  This is a total victory for the UFT and I congratulate them on their dedication and winning the battle.  While I have decided to move on from my terrible "turnaround school" many of my colleagues will be given back their positions.  However, how will  these teachers feel about working for a Principal that was instrumental in not selecting them for his or her new school?   That is for another post on another day, let's get back to the Emperor and his devastating loss.

Why did the Mayor and Chancellor decide on the City version of the "turnaround model" in the first place?  The simple answer was that the Emperor was angry at the UFT for fighting him tooth and nail on the teacher evaluation system and when the UFT pressured the Governor to intercede on their behalf to impose a compromise on the appeal process that made the Mayor and Chancellor very unhappy.  The compromise was to have 13% of the teachers rated "ineffective" have a three member panel evaluate whether the teacher was truly "ineffective" or was given the rating unfairly by a vindictive Principal.  As for the other 87%?  See you in your next career.   Even if we all believe that the City won a significant weakening of teacher "due process rights"   , the Mayor wanted complete victory and decided on his highly risky policy to get rid of as many teachers as he could to get revenge on the union who dared stop him from achieving total victory.

The "turnaround policy" the Mayor and Chancellor tried to impose was the quickest way to get 2,000 teachers out of the classroom and replace them with other teachers, 40% of them "newbies" to the classroom.  This model would have allowed the City to obtain the $58 million dollars from the Federal government while using the influx into the ATR pool as a weapon for the Bloomberg/Walcott Administration to whine to the news media of the hundreds of million dollars that the City is wasting on these "failed teachers".   Why didn't the Bloomberg Administration simply close the schools if these schools were so bad?  The answer is that it would have taken 3 to 4 years to close the schools, and there was no $58 million dollars to obtain.  Moreover, where would you send the freshman class of low academic achievers?  There are few large schools left to dump these academically struggling students that the Bloomberg small schools refuse to take?   In fact, my school is expected to receive an additional 331 students above  last year's freshmen class, almost all of them struggling academically and requiring a minimum of CTT class instruction.  Finally, by using the "turnaround model" the Bloomberg/Walcott Administration could maximize the removal of over 2,000 teachers from the classroom, many of them senior teachers and hope they retire or resign due to the humiliation and replace them with cheap and untenured teachers who will never last to recieve a pension or retiree health benefits. 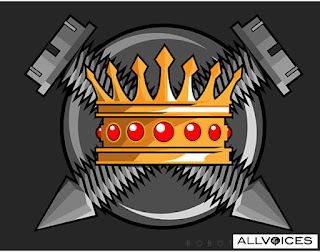 Instead of victory the Bloomberg/Walcott Administration has screwed themselves royally.  Not only was their sham "turnaround model" thrown out by the INDEPENDENT ARBITRATOR but they lost $58 million dollars that would have received had they stayed with the "restart" and "transformation" models. Further, the Danielson Framework that was being used in those schools and had resulted in many teachers being given an "ineffective rating" was stopped after January 1st and could not be used for the finally ratings of the 2011-2012 school year.Therefore, the few marginal teachers in those schools will be keeping their jobs until the end of the 2013-14 school year and when Bloomberg is no longer Mayor. Talk about screwing oneself?  Instead of eliminating teachers he must keep those teachers while losing much needed funds for the school system. Now that is what I call incompetence.

The result is the Mayor and Chancellor overreached and lost.  Now the question is will they lick their collective wounds and try next year something else or will they come up with another strategy that will eliminate senior teachers and hurt the students.  It is not called "children last" for nothing.

Before I forget, the union should be complemented on their win and I always thought they had a winnable case and I told my colleagues that, based on the facts, the union should win their arbitration case, As for the INDEPENDENT ARBITRATOR? it is about time that they strike back against the Emperor and his pet poodle the Chancellor who has insulted and belittled the Arbitrators for their own political ends.
Posted by Chaz at 11:37 AM

Can bloomy now cut funds to schools before sept hits? creating more atrs-even though he already submitted his budget to principals?

Of course he can.

This is not the end for the little tyrant. He will find a way to screw us. In that fact I have absolute confidence. He has proven time after time that he will ratchet up the reign of terror.
The toilet paper of record, take your pick, will deride and demonize teachers some more. The presstitutes will continue to use their poison pens to smear and slander teachers. The public, after a decade of this, has bought the meme, hook line and sinker.
The petulant little putz will attack teachers for the rest of this illegal third term. Because the little shit is leaving, he will quicken the pace of deform and wholesale destruction. People like evil Eva Moscowitz will continue to prosper, feeding from the public trough like the pigs that they truly are, exploiting minority children.
The next assault will be on the atr pool.
I have no faith in the UFT that created the atr situation. Lets not spin the result of the one honest arbitrator as a Unity win. It was a total fluke. The bald pimp and his overpaid minions had nothing to do with it. Lets not get all misty eyed about the group of thugs that presided over the last two insults/er, contracts and all the insipid and damaging side deals emenating from those catastrophies. Lets not forget how both the UFT and NYSUT sold out the teachets with the demented teacher evaluation agreement. The same rotten corrupt bastards who presided over the Rubber Room abomination. The same craven pricks who made all that noise about age discrimination and its mythical age discrimination law suit that was never filed. The same liars that let the little hitler close over one hundred schools. The same scumbags who cheered that assburger looking motherfucker, Bill Gates. The same pinkyring wearing parasites that exploit us at every opportunity. The little putz will find a way to close those schools. The fat lady has not even begun to warm up yet. Lets not claim victory prematurely.
Differentiate This, Feudal Oligarchs

Awesome recap.
You're not leaving the system, are you? I am very much looking forward to the piece you're going to write on 1/1/14 -the next mayor's first day on the job.

I see this the same way you do. I think this is a clear victory for the union, and I think we need to take our victories where we can.

saw the puppet on Walcott on channel 7 this morning - normally I would turn the channel immediately because I can't stand the site or sound of him but I watched him for a minute try to answer questions. and boy did he evade evade evade - he didn't answer anything and all he talked about was how independent arbitrators don't work - that he needs more control. It was taped before this decision - the irony was yummy. Independent arbitrators apparently are not independent if they rule against you - sucker!

I am not leaving the system anytime soon, even if I must stay as an ATR and as my heading states I will outlast the Mayor and Chancellor.

The victory will be a memory unless the facts of how these schools will now be run becomes public. I suspect that the principals in the 24 schools will be given specific orders on how to proceed. One of the factors that have been in place under Bloomberg/KLein/Walcott has been lawyers hired to remove teachers offering unlimited advice via Blackberry. This will continue and unless the UFT and the school chapters unite and by any means possible get the story out to the public, many a teacher will suffer another 3 terms(school terms) of horror.

I said, always be on guard as the Supreme Leader and his minions are always at an advantage of twisting and undermining what the Unions have gained with sweat and risk in the past couple of decades.

There will be more excessed people from these schools as this entire ordeal has spooked many good students from attending the schools and those who will go to the building at the most veteran teachers and the students who are the most underperforming of their bunch.

It is the classic formula for the suits at Tweed to build on in order to pad their narrative of failed schools etc...

Chaz, you want to know how the principals in these schools are going to act, I don't know, I only know what the principal in the school I worked/did work/work in was quoted as saying...

"If they thought I was a bitch last year, wait until September, they haven't seen anything yet."