Deputy Mayor Cas Holloway at the Citizens Budget Commission unexpectedly stated that the City is willing to negotiate raises for City workers which is a change from Mayor Bloomberg's "no raises without givebacks stance" from before.  This apparent change in the Mayor's attitude is his realization that he will go down in history as the only Mayor who left office leaving all municipal unions without a contract.  Moreover, he is very aware that the next Mayor will be under the gun to resolve these contracts, some like the teachers, that has been without a contract for four years!  He also realizes that the New Mayor will lay blame on him by claiming "he kicked the can down the road" and left the new Mayor with a mess. This will put a real crimp on Mayor Bloomberg's legacy 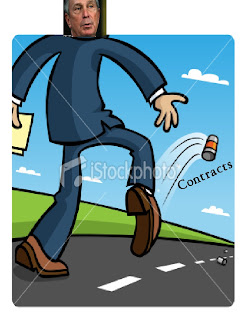 However, in Deputy Cas Holloway statement about a new contract Mayor Bloomberg did include two"conditions" to any union willing to negotiate a contract with the City.  First, he said that the contract cannot include any "retroactive raises" and that the union members will need to start paying a significant part of their health benefits.  Both "conditions" are non-starters and I highly doubt any union will seriously negotiate with the Bloomberg Administration since it has only eight months left in office.  Furthermore, the Mayor would like to establish a "new City pattern"  and ignore the old one with it's "retroactive raises", if he can only get one union (DC37?) to strike a deal with the City.  This way Mayor Bloomberg does not go down as the Mayor who refused to negotiate with his municipal employees and left the problem for the next Mayor to solve. Not a good thing for the Mayor's legacy as a financial genius.


I predict that no union will bother to negotiate with the Bloomberg Administration and wait until the new Mayor takes office, likely a Democrat who usually are more union friendly.   Considering that the City finances are slowly improving and the national recession is just a fading memory, it will be difficult for the new Mayor to plead poverty and refuse to negotiate a fair contract, complete with "retroactive raises" for the Municipal unions going forward.
.
Posted by Chaz at 7:21 PM

here is what our union should demand. All personnel who wish to become principals or assistasnt pricipals must have taught at least seven years before they can be considered for the postion. And I mean actual teaching. Not the COSA coordinator, not the program chairman but actual seven years full time teaching experince. Five clases a day, five days a week, for seven straight years. To many new pricipals come out of the leadership academy with no experience and think they know everything. Second anybody who wishes to be considered for the position has to pass exams. This was the way it use to be. From what I am told there are illiterates being made principals. Passing a rigid exam will hopefully eliminate this. Third assistant principals must teach and teachers have the right to observe them in there schools. I have been told of schools where assistant principals are giving U ratings. When the teacher asks the assistant principal to show her what to to the answer is always no. Also people in the network have to teach. And the chancellor has to teach. This man was a kindergarten teacher for 2 years and got out of teachin as fast as he could. I honestly think he would be U rated. One of the mistakes our union makes is that they treat the principals union as a friend because they see them in the same a fight as we are in to obtain a new contract. Truth be told they are not a friend but rather an enemy and should be treated as such. Of course none of these suggestions will ever be imnplemented because they make to much sense. In addition the Bloomberg administration would never allow testing for new prinipals because they know they could not pass the exams. Nor would they allow apS to be observed because they know that many of them would be U rated . More to the point the UFT would never even cosider these suggestions.