My Grade For Chancellor Dennis Walcott's Tenure Is A "F" For Failure! 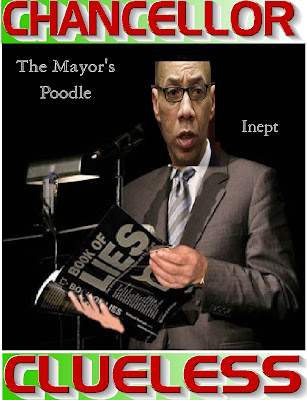 The Daily News asked some high profile people in the education field, some not even being educators, what grade would they give Chancellor Dennis Walcott?  Predictably, the education reformers gave him a passing grade while opponents to education reform gave him poor or failing grades.  Interestingly, the Daily News failed to interview teachers to get their opinion of the job Chancellor Dennis Walcott has done. However, if you read the education blogs of New York City teachers it is very obvious that there is a near unanimous agreement that the Chancellor would receive a failing grade.  Regardless of what UFT caucus you follow and support, MORE, New Action, or Unity, the Chancellor's job approval ratings are dismal.  In fact, if the Chancellor was a student, he would need to go to "summer school" because of his failing grade from teachers.

Why do the New York City teachers despise the Chancellor?  Let me count the ways.

Second, Dennis Walcott has refused to spend $240 million dollars of much needed money that a judge ordered released to the NYC schools and imposed cutbacks in school resources as a consequence of his wrongheaded decision.   As a result class sizes have increased as teachers aren't being replaced and classes are merged.  In fact, class sizes have increased throughout the Chancellor's inept tenure. 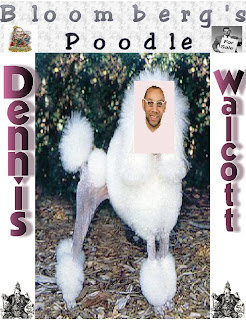 Third, he has shown to be a hypocrite time and again as he practices a "double standard" between disciplining
administrators and teachers.  He wants to fire teachers based on mere accusations but fails to terminate administrators or managers who were found guilty of doing even worse! A Chancellor who has different rules for different people is a failure as a leader.

Finally,  in 2012 the Chancellor and the Mayor made many mistakes when it came to their educational legacy and had a bad year.  Things have not gotten any better in 2013 as even the City's Independent Budget Office found fault with the Chancellor as their report showed that schools scheduled for closing were a "dumping ground for high needs students" and that under Walcott, the DOE has  starved these schools of resources.

In conclusion, Chancellor Dennis Walcott has been a failure as  a leader of the New York City schools and deserves the grade of "F".
Posted by Chaz at 10:55 AM

Don't forget that the IBO mentioned that the DoE was never following the Children First Fair Funding formula. Many schools with a high population of special needs students, ELLs, and schools with a high percentage of socio-economically challenged children never received the funding they were entitled to and were short-changed to receive those essential education services.

Another point with respect to the double-standard and a possible conflict of interest is the chancellor's daughter working in a school as a PE teacher and the mess that was created at the school where she teaches.

Hey! You can't talk about our boss like that! If this was the private sector you would be out on the street.

Chaz, you and I will outlast him and his cronies and puppets.