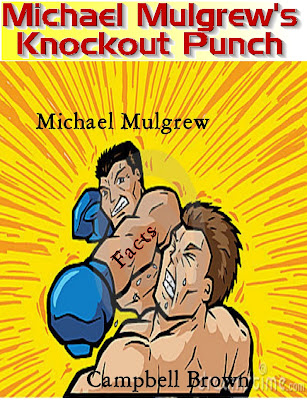 I am usually critical of my union for allowing Mayor Michael Bloomberg and his cronies at Tweed to poison and disrespect the teaching profession, especially, the classroom teacher.  However, there are times when the union does step up and do the right thing.  One of these events was when UFT President Michael Mulgrew responded to failed newscaster turned pusedo-reform advocate Campbell Brown's complaint that the union protects sexual predators in the schools.  The exchange between the two can be found here.

Ms. Brown asked Mr. Mulgrew if he would take a pledge and renegotiate the teachers' contract to allow the Chancellor to fire teachers accused of sexual misconduct, citing 128 DOE employees that she claimed did commit sexual misconduct and only 33 were  fired.  Mr Mulgrew responded in one of his best moments of his tenure by telling Ms. Brown that he does not pledge to her and that her definition of sexual misconduct cannot be  based on a mere accusation.

Mr. Mulgrew then went on to lecture Ms. Brown about how her allegations are misleading and how the system actually  works.  Mr. Mulgrew explained to Ms. Brown that the union agrees with the DOE that a simple allegation is sufficient for a teacher to be removed from having contact with children if a Principal so wishes it and if an Arbitrator finds that the teacher committed any sexual misconduct they must be fired.  There is no discretion by the Arbitrator on this.  He also told Ms. Brown that the reason the 95 DOE employees were not fired is because the charges of sexual misconduct were not proven to be true.

Finally, Mr. Mulgrew ended his response to Ms. Brown by telling her to get her picture taken by the Daily News and stopped any further discussion on the matter as he proved his point that the union does not protect sexual predators.  For people unfamiliar with the teacher contract here is what it says on page 120 of the latest edition of the teacher contract.


I must say that the exchange between Michael Mulgrew and Campbell Brown was a one-sided boxing match and the winner by knockout was Michael Mulgrew.  Good job Mike!
Posted by Chaz at 8:51 AM

Where was he when it was time to stand up to Cuomo, et. al. on Common Corporate Standards and Danielson checklists?

Oh, right, he was collaborating and promising to sell them to his members, which he is faithfully doing.

The man's a fraud, just like his mentor, doling out some occasional poses for the benefit of a demoralized rank and file.

Sorry for the poor proofreading: the first line should have read "... takes down a human cartoon..."

I agree that Mulgrew handled himself very well. He has got the capacity for snide sarcasm, which I actually like. I'd very much like to see it more consistently used against reformy folks like Campbell rather than UFT members who don't precisely follow party line.

I agree with everything Michael Fiorillo says. I will add a few things.

1) In some schools teachers are being forced to work until 6 PM without extra pay. They decorate walls, they input data and other tasks all without any extra pay.
Michael Mulgrew says nothing about this.

2) In many schools teachers are being forced to pass students who who should not pass. In many schools they talk about the 80 percent rule for passing. If you do not pass at least 80 percent of your students you stand a high probability of being U rated. I know teachers who have told me that they pass everyone because "They do not want any trouble with administration".
Michael Mulgrew says nothing about this.

3) Education has now become a business. Many aps and principals have little or no teaching experience and yet are placed in charge of schools. Many come from the leadership academy and are there for the sole purpose of driving the statistics in the right direction. This is a disgrace and Michael Mulgrew is silent on this issue.

4) In many schools the aps and principals will not hire senior teachers. These schools hire all untenured or new teachers. The principals know that they can control these people. Micheal Mulgrew says nothing about this.

As Michael Fiorillo says "The man's a fraud". I will add that he is doing more to destroy the union than help the union.

I agree with the comments. However, occasionally, our union actually does the right thing for the right reasons and this is one of those occasions.