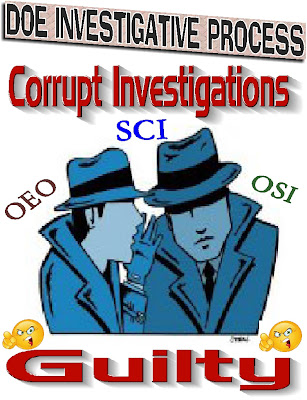 What does Mayor Bloomberg his poodle, the clueless Chancellor Dennis Walcott, and the failed journalist, Campbell Brown have in common?  They all believe that real evidence of teacher misconduct is unnecessary as long as the DOE investigators substantiate the accusation,  no matter how weak the case is. That's right, if the DOE investigators can substantiate even the smallest incident and the Principal wants that teacher out of the school, look for 3020-a charges to follow.

Time and again in my blog I have identified how the various DOE investigative units, Special Commissioner of Investigations (SCI), Office of Special Investigations (OSI), and Office of Equal Opportunity (OEO), will twist, pervert, and embellish the most innocent of actions as misconduct. Rather than rehash the points you can read these posts here, here, and here.  They will tell you how the flawed and biased DOE investigative process works.

There are two constants for all DOE investigations that lead to 3020-a charges.  The first is having a Principal target you.  In almost all cases that lead to 3020-a charges it starts with the Principal.  These principals will make"mountains out of  molehills", or even when there are no hills to get the teacher subject to an OSI or SCI investigation.  These principals understand that the DOE investigators  do their best to substantiate the most trivial of actions to rid the Principal of the teacher they don't like or want and even lie just to get the teachers removed.  Yes, investigators are caught in lies. However, it's of little consequence since their job is to show guilt and not the truth.
The second, is the investigator's presumption that the teacher is guilty of something and it's their job to find that guilt even if it means substantiating the unsubstaintiated hearsay or gossip associated with the accusation.  Real evidence is unnecessary and is only a problem at the 3020-a hearing, not for removing the teacher from the school and the investigators know that.

Sure, some teachers commit real misconduct and should be terminated.  However, its important that teacher "due process rights" allow for a fair and independent hearing on the 3020-a charges and that should include the DOE investigative process which presently, is a "stacked deck" against teachers and is used by pusedo-reformers who want to destroy the teaching profession.

Finally, never, never, never speak to these investigators.  Let your lawyer or union advocate speak with them.  They will take your most innocent statement and change it to make you look guilty of the allegations.
Posted by Chaz at 7:34 PM

Awesome piece. One brief (unrelated?) thing to add (only because many HR offices of private firms have equally unfair investigations that lead to terminations): I think that those who feel due process for termination of teachers is too lengthy out troublesome should consider that due process -a right that only unionized workers enjoy- should be extended to everyone -not taken from the few who still have it.

So true. After I was a witness in an OSI investigation against my principal. A few months later they turned me into a subject for failing to report what I had witnessed.

right on the money. Everybody, needs to read this and understand how unfair these investigations are.

Quick question: Does anybody think that there is a possibility that with a new mayor, that these sham investigations might cease? How many corrupt head honchoes at the DOE will be gone next year? I'd love to hear from some people "in the know" about this.

Must suck to be Campbell Brown what a comedown from bring a hotshot news reporter to being a tool who has to make a living trying to destroy teachers. Walcott was always a loser though I guess and Bloomberg well we all know what we would like to happen to him

Advice to teachers: administrator targeting you? Hire an attorney - immediately.

The UFT will NOT defend you. They are not on our side. They are working for the enemy. Don't believe me? I didn't want to believe it either - until I saw firsthand how the UFT operates. We are paying dues to an organization that is working for the other side.

Do NOT listen to what they say.

Watch what they do.

TEACHERS WHO GET A CALL OR EMAIL FROM OSI OR SCI:


Do NOT, I repeat, do NOT talk to them at any point - even with a UFT "advocate". They are looking for ANYTHING you say so that they can use it against you.

Just tell them you were advised by your attorney not to speak to them.

Just like my attorney told me, OSI and SCI is NOT your friend

How to deal with SCI and OSI