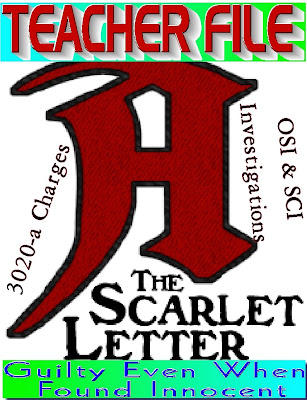 Only in the bizzaro world of the New York City Department Of Education (DOE) does a teacher who was found innocent of charges still is guilty of those charges.  Yes, it's true!  The DOE has flagged all teachers who were charged under 3020-a even when those charges were found to be untrue!  In other words, the DOE will put a discipline flag on a teachers file if the accusation results in 3020-a charges regardless if the accusations were proven to be true or not.

If you're a reader of my blog, you know that I have written extensively about the City's 3020-a process and how biased and flawed it is.  However, what is little known is the discipline flag that the DOE places on a teacher's personnel file making it virtually impossible for those teachers to get an interview for vacancies.  In other words the DOE has placed a "Scarlet Letter" on their files when principals and only principals can see when they access the teacher's file.

The UFT has filed a PERB complaint about the unfairness of attaching a discipline flag on teacher files when an independent Arbitrator found that the DOE charges for the stated misconduct was not upheld.  However, it appears the union is not pushing their complaint with any urgency while in the meantime all those teachers who were found innocent of the DOE charges of serious misconduct have the dismissed charges on their teacher file as if the charges were found to be true.  In other words, in the bizzaro world of the DOE, once charged you are automatically guilty no matter what the evidence shows at a 3020-a hearing.  Now that is real serious misconduct.

You should also add in to the A the letters 'T' and 'R' b/c when you become an ATR, you are labeled as well in the DOE by principals and even peers. I am in my late 30's, have been teaching over a decade and have my master's plus 30, hence, no principal wants me. Colleagues have even asked how long I was in the rubber room for and what I did to get there.

Disgusting witch unhurt. What does ACLU have to say about this?

Agree 100 percent with Atr comment. Definitely a scarlet letter scheme that the union has completely ignored and that the DOE enforces with its moronic and criminal funding policies.

This is very disturbing and it's little wonder many ATRs cannot even get a interview.

Even if found guilty in the kangaroo court, it doesn't mean one is guilty. One can plead innocent and still be found guilty. Another would say, "That is beause you were guilty." In a real court, beyond a reasonable doubt would be necessary.

How many teachers were found guilty and were innocent because their representation (aka NYSUT attorney) was really covertly defending the DOE. If the teacher was not terminated, and is still an ATR, the "red flag" is a darker red.

The main ingredient is the principal and his/her dislike of the teacher. The "investigators" are all corrupt. They all will receive their dues in time. It may not be on them, but their family members. What goes around, comes around.

Hello out there - any of the administrators reading this, don't let your power go to your head. You could be next.

Hate to threadjack but someone forwarded me comments about myself in the Bensonhurst Bean:

There's some seriously misinformed teacher bashing in that thread, as usual.

Hate to threadjack but I was forwarded this article about myself in the Bensonhurst Bean. Another day, more ignorant teacher trashing:

We should take the UFT to court.