The Collusion And Inaction By The UFT And DOE Is The Major Cause Of The ATR Crises. 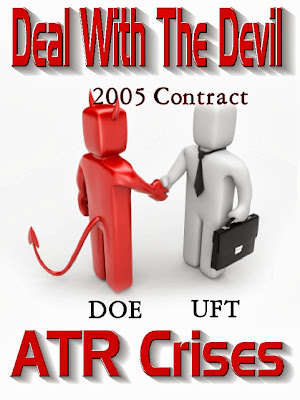 We all know that the deal between UFT President Randi Weingarten and Chancellor Joel Klein that resulted in the infamous 2005 contract resulted in the ATR crises that has lasted for seven years.  Randi's "deal with the devil" has resulted in over 2,000 teachers being displaced, ever larger class sizes, and more overcrowded classrooms throughout the City.  When you hear from the UFT leadership they claim that once Mayor Bloomberg leaves office, the ATR crises will disappear.  However,  I am not entirely confident that the UFT leadership can be trusted to do the right thing.

Over the last couple of years I watched how principals failed to hire ATRs even when there are vacancies in their schools.  These principals would rather hire teachers who are not certified in the subject area rather than hire an ATR.  I will give you two examples of this.

Example 1:  Queens Vocational High School had four Earth Science openings in the 2012-13 school year but according the Principal she could only find one teacher to hire.  Really?  I did apply to Queens Vocational High School that year on the Open Market Transfer System and NEVER RECEIVED A RESPONSE!!!!  My colleague told me that he never received a "mandatory interview request" from Queens Vocational during the school year as he traveled from school to school.  for the 2012-13 school year.  How do I know that the school needed four Earth Science teachers, the Principal Melissa Burg admitted it to New York 1!!!!

The question is if there were between 12 to 15 Earth Science classes without a certified Earth Science teacher teaching the students, who taught them? My best guess is that it were Living Environment (Biology) teachers and this summer when I marked the Earth Science Regents I met one of them and he told me that they only had one licensed Earth Science teacher and that the other teachers had to split their schedule between the two sciences.  Is Queens Vocational High School an exception?  I fear not, its more common then you might think.

In the second example I notified two bloggers who also are Chapter Leaders who passed this information to both the District Representative and the UFT Leadership.  The result?  No action whatsoever.  Did the union leadership even bother to alert the DOE that these schools were violating the collective bargaining contract?  Maybe they did, or maybe they didn't bother? 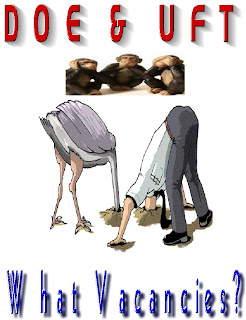 It matters little because our union seems to be in collusion with the DOE and violations of the contract results in no
action or remediation as the over 2,000 displaced teachers are sent weekly to "babysit"  for absent teachers while "uncertified newbies" are gobbled up by principals who care more about their budget then having a properly certified and quality teacher in the classroom..

"Children first"?  not according to these principals who rather have inexpensive "newbies" than quality teachers.   Why does the UFT and the DOE ignore  the apparent violations of the collective bargaining contract,  you need to ask them.
Posted by Chaz at 7:32 PM

But what will happen to us - The worst thing would be that they just stick us in vacancies and not give us any choice - that could even be worse - I mean I don't want to be placed in 90% of the schools in Queens so what happens if they just decide they can stick us anywhere - could that happen? I really hope not but I am really scared that it can. I do not want to accept a position unless I know that it is right for me - is that too much to ask? What do you think

All these years I have just stood by and continually witnessed first hand these unfair hiring practices. The small schools have people on all level working out of li

In a small school in the Bronx, three tenured math teachers left their positions via open market. The principal filled all three positions with three first year math teachers. It would seem that there are no math ATR teachers. Open Market caused the ATR crises and the rank and file who voted in favor of the 2005 contract for more money brought about the perpetuity of this travesty.

The Bronx uft office intentionally is giving out misinformation -- that there are less than 100 ATRs in the system, that we have to take any position offered (even if its out of license), that we can be given any kind of busy work including clerical, deaning and lunch duty. They are having an ATR uft meeting at Halsey St on Mon. Oct 7 from 4-6 PM. If you are a Bronx ATR I urge you to attend.

I more reason to nerve work at math/science in Queens. .Cruz Is forcing his teachers to submit weekly lesson plans in blatant violation of the contract. Practically the entire staff has been u rated or denied tenure so no one filing a grievance! Also when a tenured teacher filed a grievance against him last year he then became the victim of Cruz's sick retaliation. Just letting you know out there that you do not want to work there.

I do not want to them to get rid of atrs if we acre simply going to be placed in schools without a choice. I will not work in a school like math/science so how do we solve the Atr problem without having teachers placed where no one else wants to go ?

Sorry to continue the anti Cruz fest but he also said the following to students and he has said it many times before without it being reported to authorities ! Until now by me ! He said "Our girls are the best looking in the building and our teachers are the best looking in the building!" So disgusting inappropriate and gross he should not be around children! Seeing lawyer soon ! Should I talk to the press! He breaks every rule in the book!

I am having the opposite problem... I had a job offer taken out from under me because I was told that the school was 'assigned an ATR' .... I am a new teacher who can't get classroom teaching job because they are not allowed to hire me....

This is a monumental, staggering waste of talent. I was out with several ATRs last night, and so much expertise lost: two experienced, seasoned, knowledgeable English teachers, one math teacher, and one science teacher. Only one had over 17 years of experience. The upside is that they all read your blog and appreciate it greatly!
They all asked the same questions: 1)Why are young inexperienced teachers getting hired and not them? and 2) Where is the union?

Thank you for the compliment.

The primary reason that principals will not hire ATRs is salary. Even when an ATR signs a "provisional agreement" they are not invited back the next year. Over 90% (probably 98%)are told by the Principal that they decided not to retain you. The reason is that the first year the ATR does not affect the schools average teacher salary but the second year it would.

The union is embarrassed about how the DOE and principals have violated both the spirit and the letter of the ATR agreement and are hoping for better things in a de Blasio administration.

Do you think any changes will actually occur with the ATR situation? Honestly, in my opinion, unless they take the budgeting away from the principals and put up a real hiring freeze, then nothing will happen.

Why would a principal want an ATR long term when we cost them more money than a neophyte?

Like I keep repeating if you go back to the November 2009 agreement, principals would pick up ATRs if they are being paid as newbies with central paying the rest. Moreover, since principals will need experienced teachers since the overall school scores will be used to evaluate them, this gives them a further incentive to hire ATRs.