My Overview Of The Different UFT Caucuses. 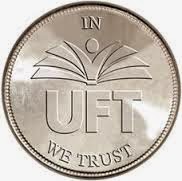 The UFT is one union.  However, it has different caucuses when it comes to representing educators and here is my overview of each of the UFT caucuses and what, I feel they stand for or in some cases against the member interests.

Unity:
In power since the beginning of the union and the leadership has become increasingly disconnected from the

rank and file. Under Unity teachers have been subject to "givebacks" and now making ATRs  "second class citizens".   Democracy ends at the lowest level with only Chapter Leaders elected by the members.  All other positions are appointed by the leadership who demand a loyalty oath.  Lately, the union has put politics above the interests of the members by not supporting Teachout against Cuomo and co-sponsoring a derisive Al Sharpton lead march against fellow union members.  It seems that the leadership's social justice interests trump the rank and file needs.

The opposition caucus that once held real promise but is ideologically split between the moderates and the Socialists.  Lately, the Socialists have seemed to have taken the upper hand in this caucus and their social justice plank seems to trump all other issues, including member rights.  The MORE caucus has moved to the far left and has alienated many anti-Unity moderates which makes their days as the primary opposition group questionable.

New Action:
They claim to be the voice of reason in the UFT but their deals with Unity, like getting two executive board seats in exchange to supporting the Unity caucus candidate for President, is unsettling to me.   Moreover, they tend to follow the Unity position when the leadership tells them to. They also put too much emphasis on social justice and also unwisely supported the Al Sharpton anti-police march. 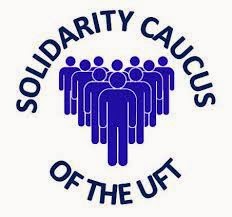 The new kid on the block and claims it will be narrowly focused on educator issues and be more a trade unionist caucus.  I have joined the Solidarity caucus and hope they attract all like-minded educators who believe that the classroom environment and teacher respect is the most important consideration in teacher satisfaction and student academic achievement.  Time will tell if this caucus will become the primary opposition group or die a slow and painful death like many others have over the decades. Maybe if ICE splits with MORE and combines with Solidarity, a real trade unionist caucus will be created and become the face of the UFT in the future.

A fringe group who operates outside the UFT caucus system. This group is simply a front for anti-union corporate elites and is a fifth column. E4E had a chance to run in the last UFT elections but failed to do so in fear that they would have been exposed as a cult with few real members. Most of the E4E leaders were untenured teachers who quickly left the classroom and took the money that deep-pocketed  corporate reformers gave them to advance their anti-union agenda.

Here was my interview with an ex-E4E member.
Posted by Chaz at 7:08 PM

That last one is a hoot, Chaz. The group that is dedicated to completely "reforming" our system, yet fails to run in elections to promote "reform" when given the opportunity to do so. Where is the media NOW?

Wait, I consider myself a Socialist in the broad, European sense of the word. That is someone who is opposed to the vast inequality that is the 1% takes all.
I feel very strongly that the primary goal of a UFT caucus should be that of supporting, protecting, and working for the rank and file.
We do not have that with Unity. It appears that More is too ideological. Yes to Arthur Goldstein for spelling it out.
Yes, to ICE and Solidarity working together. Power in numbers.

You don't give space for the Independent Community of Educators (ICE) which ran as recently as 2010 and certainly still exists. You only mention them as possibly breaking from MORE.

At this point ICE is part of MORE and hopefully ICE will either be its own caucus or combined with Solidarity.

I didn't start the fire... I just tried to collect the burning embers into one larger flame.

As it stands now Solidarity Caucus is moving along in the right direction. However it is still a large rock that needs experienced activist to come help chisel and form it.

We will hold our first general meeting in November. http://www.Solidaritycaucus.org

Chaz and James -- while I joined Solidarity I also remain active in MORE and ICE. ICE people are leading the way inside MORE to create a balanced caucus. ICE was and is a social justice caucus - as someone who is considered the founder I want to point out that I would never have founded ICE if it was a Solidarity teacher only caucus. I taught due to the kids and I would never leave their interests out of any political work I did or do. We don't make widgets.
ICEers will continue to struggle in MORE to make it the caucus it should be. If that fails then all balls are in the air.
Read the ICE platform from 2010 and tell me if it is more MORE or Solidarity. ICE was always to the left of TJC which was a narrow caucus. http://uftelections2010.blogspot.com/

anyone familiar with the guidance counselor chapter leader rosemarie thompson??? - basically does nothing for counselors and is a nightmare to meet in person...

Chapter leaders vote for district reps. In my last year as chapter leader there was an interesting contest with three candidates running. Two were Unity, one wasn't. No one told me how to vote and I voted for the person who I thought would do the best job - i.e. would not be afraid to stand up to a district superintendent.

We used to call New Action "No Action!"

Not anymore. The District Rep is now appointed by the leadership. They don't trust the Chapter Leaders to vote their way.

As an ATR I have been offered a provisional job outside of the ATR system. Meaning it is not a forced provisional assignment. My question is does the principal still have the right to send me back to the ATR pool for "problematic behavior"? Expecting it to be a one year job due to salary but trying to figure out if I should accept the job. Thanks

Love the idea of ICE and Solidarity joining forces!

At Kennedy HS campus they have the heat at 85. Everyone's sweating to death and getting sick. I guess we'll all have the flu by November. More coverages for ATRs, more kids absent and lots of wasted money spent.

As another founder of ICE, I can say with all honesty that Norm and I have argued over education v trade union issues for many years but we still trust each other. I love the kids too. I got involved as one of the trade union voices in ICE and Norm represented the education wing. We strike a nice balance. I don't know how ICE was to the left of TJC. Some might argue that. I will end here and hopefully Norm and I won't have one of our fights online.

My difference over the years with James has been over what I view as his artificial division between trade union and educational issues. That stems from the fact that many ICEers were elementary school people, the first caucus in the UFT that had a significant elem school presence - we see things very differently from HS teachers due to our roots in the community.
As for being to the left of TJC - just look at our platform in 2010 and the stuff they were talking about - narrow trade unionism. ICE was the social justice caucus for almost a decade and in fact ICE was almost all leftists - but independent leftists other than the PL people. And you know that if ICE hadn't been left PL would have had nothing to do with us.
Therefore, any hope people have of ICE and SOlidarity coming together is a pipe dream. Most ICEers are still much closer to the core of MORE politically and will never go to a caucus that only talks about teachers. ICEers will continue to struggle to make MORE the kind of caucus is should be - concern for school workers (there are 40,000 non teachers in the UFT) and for the people we teach.

No one ever said Solidarity Caucus doesn't care about kids. That rhetoric sounds like it's coming from the Campbell Brown Michele Rhee Students First playbook.

We'll answer any questions at the meeting.

Norm is not correct that ICE is almost all leftists unless you define left as non-Republican.

I don't believe you can support this: "Moreover, they tend to follow the Unity position when the leadership tells them to."

Does the Queens HS for Teaching really have secret two-way mirrors? Incredible.