The Legacy Of Givebacks By The Unity Caucus Under The Weingarten/Mulgrew Regime. 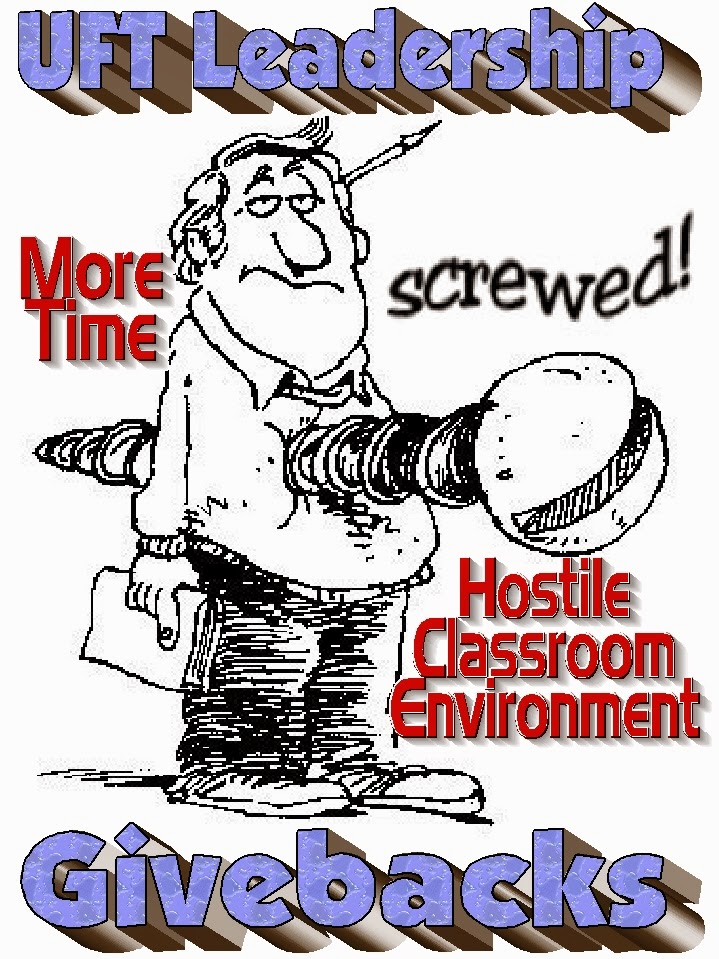 Since the beginning of the 21st century the working conditions and "due process rights" for the New York City classroom teacher has steadily worsened.  We find ourselves with longer days, more paperwork, and a Teacher Evaluation System that makes for a more hostile classroom environment. Teacher autonomy in the classroom has been replaced by administrative micromanagement and Principals, fresh out of the "Leadership Academy", who with little actual classroom experience,  rather dictate than collaborate with school staff.  In this backdrop, our disconnected UFT leadership has been instrumental in the worsening environment for New York City teachers by agreeing to massive givebacks to the City for raises that barely kept up with inflation. What follows are the list of "givebacks" the UFT, led by the Unity caucus has agreed to since 2000.

3020-a Process:
In 2000, the newly appointed Randi Weingarten, with six months of actual teaching experience, worked a deal with the City to streamline the 3020-a process by agreeing to a rotating list of between 19 to 36 arbitrators to hear 3020-a cases.  In doing so Ms. Weingarten sharply reduced teacher "due process rights".  First, teachers were no longer allowed to refuse the selection of an arbitrator as the rest of the State can.  Second, for incompetency cases, the three arbitrator panel was eliminated, leaving the teacher at the mercy to the decision of one arbitrator. Third, if a teacher retains a private lawyer,it could be a disadvantage since the arbitrator is used to working together as a team for a year or more with the NYSUT and DOE lawyers and replacing the NYSUT lawyer could subconsciously affect the arbitrator's decision negatively. Finally, this NYC 3020-a process limits the chances of the teacher to be found innocent since the arbitrator can only stay on the panel with the approval of both the DOE and UFT.  Therefore, only 4% of the teachers are actually found innocent.. Usually, the arbitrator will give the DOE something to appease them for their time and expense in bring 3020-a charges.  The result is the teacher almost always become an ATR.

Mayoral Control:
Inexplicably, Randi Weingarten didn't oppose Mayoral Control nor did she oppose its renewal.  The result was the "rubber stamp" PEP and 160 closing schools, despite community and political opposition.

The Infamous 2005 Contract:
The 2005 Contract that not only contained the major givebacks that we still suffer from presently but resulted in the ATR crisis and the "mutual consent" provision that allowed principals to hire who they pleased.  Please read my "Here Comes The Clowns" series on what damage the 2005 contract has done to the teaching profession.  Here, Here, Here, Here, and Here in this giveback laden contract.

The Fair Student Funding Fiasco:
This ill-conceived idea that dumped staff salaries on the schools rather than from DOE Central, back in 2007, encouraged principals to hire the "cheapest" and not the "best teachers" for their schools, combined with the mutual consent provision, this has made hiring veteran teachers almost an impossibility.

The 2007 Contract:
This contract saw the expansion of the "probable cause" section that included felony assaults.  However, the most serious giveback was the establishment of the Peer Intervention Plus (PIP+) program that resulted in a finding of incompetency of over 90% of the teachers who took the program.  The UFT leadership knew very well that since the vendors were being paid by the DOE, there was a real concern that these venders would not be objective.  However, the leadership encouraged the Chapter Leaders to recommend the PIP+ program and many of these trusting teachers ended up terminated or forced to resign.

The TDA Reduction:
Randi's parting gift to the members was to allow the City to reduce their contribution to the TDA interest rate in exchange for the two days before Labor Day that she unwisely gave up in the infamous 2005 contract.  She allowed the City to reduce their TDA interest rate contribution by 1.25%, from 8.25% to 7%.  Depending how much one has in the fixed income part of the TDA, the interest rate deduction could result in UFT members losing tens of thousands of dollars by retirement.

The 2014 Contract:
The givebacks continue under the new contract as it makes ATRs second class citizens, subject to an expedited 3020-a hearing process, making some ATRs who won their termination hearings "untouchables" and royally screwing ex UFT members by not giving them their well deserved retroactive payments. I descussed this in the post called "winners and losers".

What do we get for all these "givebacks" that has made teaching in the classroom a more hostile and dangerous environment?  Raises that barely equaled the inflation rate, meaning in 2000 dollars, our salary is essentially unchanged.  Maybe the Unity caucus should rename themselves as the "Givebacks"!

In theory, I am an untouchable ATR. Although acquitted on all three malicious 3020a charges, no thanks to Mulgrew's shysters at NYSUT who refused to defend me, the rookie arbitrator set a $10,000 fine for unchargeable conduct the DOE never mentioned.

Yet I may not be as untouchable as thought. Farina's DOE sent me on two high school social studies interviews this week in Brooklyn. Both the principal at school 1 and the AP at school 2 professed ignorance about a distinction between excessed ATRs and us once re-assigned ATRs, the supposed untouchables.

CHAZ,
It would be beneficial if you could do a story on the DOE and their meeting with the city council this past Monday. The purpose of the meeting with the DOE was for the city council to understand how many guidance counselors are in the system, what are the case loads per counselor, how many guidance counselors are working in the high schools and further. The DOE representative could not answer any of the questions!!! Yet,,,,the DOE is telling guidance counselors that they will be placing them into schools that have needs but the DOE admitted to the city council that they have no idea about any of the guidance counselors or what their caseloads are, etc....This is another typical example of the hypocrisy and incompetence or political dysfunction we have to deal with on a daily basis and a story here is warranted Chaz.
here is the story
http://ny.chalkbeat.org/2014/09/29/city-council-pushes-for-data-on-school-guidance-counselors/#.VC1g-PldV8E

7% guaranteed at a time when 1% is unavailable to most people. Hard for average NYer to cry a river for us.

I'm considering falling down a flight of steps at my school. Of course I will plant a school lunch on the top step, etc. Chaz, after I use all my sick days at home because I won't be able to move, how easy is it to go out on disability? Can I get some real $$ and never teach again?

That's not the point. She had no right to give up the 1.25% for the two days before Labor day which she should have never agreed to in the first place back in 2005.

honestly, it is NOT worth the possible jail time and definite conviction if caught. And chances are, you will be caught.

Many years ago, I ran into Randi and Sandy. I was surprised when she became head of the UFT, with absolutely no creditials, other than being friends with Sandy. In fairness, I thought she did a great job (and personally told her so) until that 2005 contract. It was the anthesis of everything she had done prior to that. It allowed for the dismantling of schools, the castigation of senior teachers, Bloomberg control of the schools and all the crap that went with it. Instead of becoming a pariah because of this deal, she got a promotion as head of the AFT. I suspect Mulgrew is now being primed for that position, as he has just pushed through another disasterous contract. The union and the teaching profession is on life support. Arnie Duncan, Campbell Brown, et al. are standing by to pull the plug.

CHAZ, PLEASE DEMAND THAT UFT STEPS UP AND SPENDS SOME MONEY ON COMBATIVE ADVERTISING. WHEN APPLE COMPUTER COMES OUT WITH NEW IPHONE LARGER SCREEN, ETC. -
SAMSUNG COMBATS ADVERTISING BY SENDING OUT THEIR MESSAGE. THE UFT NEEDS TO SEND OUT MESSAGES NOW TO COMBAT THIS BOZO LOSER DESPERADOES TRYING TO TRASH OUR LIVLIHOOD!!!!!!!!!
The UFT really needs to step up and stop this assault on our schools and the constant praise of this witchypoo moskowitz....step up UFT!!! Don't let these incompetent, stool wiping gorillas get their way!!! They are all just a bunch of goons sitting on the toilet thinking of another way to get their ugly stinky ass holes into our schools!!!

Step up Uft? Where have you been. They're helping the charters out. They're not on our side. Haven't been for a while.

Too bad. Unions are supposed to negotiate deals like that for us. Unfotunately, the last few deals have been stinkers. 7 percent interest (on funds that we can't touch until we retire anyway) is good benefit that we deserve based on the level of education and status of our profession. I could care less for other New Yorkers. If they want the same, they should become teachers too.