Another School Year Ends With The Destructive Bloomberg Policies In Place. 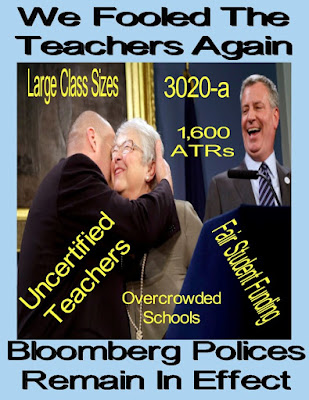 When the Bloomberg administration left office, teachers throughout the five boroughs eagerly anticipated real change in the hostile classroom environment.  We hoped that the continued attacks and mandates on teachers from Tweed would end as the new Chancellor would replace the decade long Bloomberg era policymakers with real educators who understood what the classroom was about. Real change was coming to the DOE claimed our UFT President Micheal Mulgrew, and he sensed a new era of collaboration between the DOE and the union.  Unfortunately, the collaboration between our union leadership and the DOE did not extend to the staffs of the schools or the classroom teacher.

To me, real change is what is going on in the classroom and after a year and a half under Mayor Bill  de Blasio  and his disappointing Chancellor, Carmen Farina, very little has changed.  Let's look at the policies and practice under the DOE before and after the changeover and see how little has changed.

Class Sizes:  Under Bloomberg, class sizes rose over the years and despite Mayor De Blasio claiming he was going to reduce class sizes, the opposite occurred with no reduction in class sizes, the highest in the State.  Moreover, the latest City budget reduces funding to solve the school overcrowding problems, especially in Western Queens.

School Budgets: Shockingly,  Chancellor Carmen Farina froze the already tight school budgets, despite the rapidly improving City economy.  Worse, she left in place the bloated DOE bureaucracy with the emphasis on mindless data mining and accountability not to mention the ever increasing headcount of the legal division to prosecute teachers under 3020-a.   While more and more money went to the already bloated DOE bureaucracy, the schools, who had seen an average 14% reduction in funds since 2008, were starved for resources and were forced to beg their teachers to take an extra period to save on hiring in an effort to save money. In too many schools teachers uncertified in the subject were instructing students, usually with disastrous results.

DOE Policies:  The polices that the DOE implemented under Bloomberg resulted in increased paperwork, the ATR crises, and a funding method called "fair student funding" that forced schools to hire the "cheapest and not the best" teachers for their students have remained unchanged under the disappointing Chancellor.

Principals:  Despite Carmen Farina's claim that she will remove the system of 400 principals who shouldn't be in charge of the schools, few have actually been removed.  Just take a look at some of the principals in my blog or in the newspapers, they are still in charge of their schools.  Moreover, the infamous DOE "double standard" still exists when it comes to disciplining staff and school administrators.

While our UFT President hugs the Chancellor and claims a new era of cooperation between the UFT and DOE is here, the reality is very different.  When it comes to the classroom, its still a hostile environment and a "gotcha system".  Nothing has changed under the disappointing Chancellor as the destructive Bloomberg policies are still in place and experienced teachers are fleeing the system in greater numbers..

The Bloomberg policies will remain in place because they produce long term financial surpluses; we ATRs will be retired in a few years, schools will be closed/opened/closed/opened in an Machiavellian rush for federal dollars, privatized charters will gorge themselves with public money that should stay in public schools, tenure will be abol...well, do I really need to finish this?