Throughout the New York City high schools the pressure by school administrators to increase the graduation rate has resulted in academic fraud by graduating academically unprepared students by any means possible.  This is not an isolated problem identified in John Dewey and Flushing high schools but is widespread throughout the New York City school system.  Despite the more stringent "credit recovery" rules that the State requires and the DOE promised to implement, the DOE looked the other way as these abuses continued.

Even when, under media scrutiny,  the DOE will drag their feat in investigating "credit recovery" fraud.  Worse, is what's happening at Richmond Hill High School.  After the DOE was caught in a blatant lie that no teacher of the school was allowed to re-grade the Regents, it turns out that the school administration hand-picked some teachers to re-grade the Regents with predictable results.  What did the DOE do?  They sent SCI investigators into the school on the pretense to gather evidence to the potential cheating scandal but quickly morphed into a "witch hunt" to identify the whistle blower(s) who dared embarrass the DOE and even sent them to their homes! 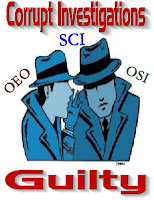 Unfortunately, this is not an isolated case, both OSI and SCI are really not interested in investigating administrative misconduct and many of their investigations seem to morph into identifying whistle-blowers with evidence obtained against the teacher used for disciplinary action.  To see how the two agencies work look at my corrupt investigations posts.

I do not or cannot trust these investigations and neither should you. You should never willingly talk to these people without a lawyer if its SCI and a union advocate if its OSI because whatever you say will be used against you since its not about the truth.
Posted by Chaz at 11:00 AM

I read the articles about Richmond Hill and it seems that after the tests came back to the school, teachers reviewed the failed ones to see which could be appealed to the Superintendent for rescoring. If they follow the rules, these exams have to then be sent back to the Superintendent who has another school review these and decide if the original score was right or if the revised score is right. I know this is within the rules for appeal but are you saying that this school actually just went ahead and restored Regents themselves without following this procedure? I'm fuzzy on the details of this one, can you explain?

My understanding is that the school's teachers did the re-grading.

This has been going on for years in every school! When I was a young teacher I reported it to the principal and it was Me who had to defend myself. Never again did I do that - that was 21 years ago!

The only way this will stop is if it's investigated by an outside source. If I were Cuomo I would set it up. Unfortunately it will hasten the demise of public education, as there will be proof that there is no education going on. If I were a teacher I wouldn't report a thing. You'll be out of a job.

Unknown said...
This comment has been removed by the author.
8:44 PM

Its on my blog.

With all the horror stories about distributed scoring, i can understand why a school would review the failures of their kids for appeal, but regrading the tests themselves is a whole other thing.

Credit Recovery. I love it. Pass em right through as I make my principal smile and collect my 6 figure salary. Let these kids get out into the real world and work at Toys R Us already! LOVE IT!! It's the DOE's fault all the way. THEY ALLOW IT.

By publicizing the DOE's response to whistleblowers, the POST is publicly announcing that they will follow this response and keep a very watchful eye on what happens to any staff at Richmond Hill. Yes, the DOE acts in concert with the Bloomberg era as their legal eagles have but one purpose to defend DOE acts of fraud and malfeasance, and punish those who seek the truth. In short, the corporate model personified!!!!

Toys r us if they're lucky. Better off on EBT like their parents and grandparents. Keep the low class low and pass them right along. The doe loves it you're right about that.

I used to work for YABC, where the "children" were 20 and 21 years old. First, who on earth spends 7-8 years in high school? Second, the goal of staff was to pass the "children" by any means necessary!

Need 5 gym credits? No problem, just complete these nonsense "packets" of phys ed work, dealing with the history and rules of volleyball, the Olympics, etc...

Need 6 elective credits? No problem, if you have a part-time job, we will give you one credit for every 20 hours of work. Just bring us your pay stub for proof.

Need US HIST 5 and 6? You got it! We will place you in a US HIST class with two attendance scan sheets. One for H5, and the other for H6. One class, one semester, yet we will give you TWO credits. Yeah, that makes sense.

YABC site supervisors are under a lot of pressure to move these kids forward with credit accumulation and ultimately... graduation. I secretly used to laugh to myself when I'd see these kids filling out FAFSA and college applications. How sad that the majority will not even be capable of completing a 2 year community college program.

I had students in Grover Cleveland in the 2001-02 SY who were accepted into CUNY COmmunity Colleges- for 2 year associate degree programs, and have consistently attended c)ass, yet in 2015 have yet to earn.said degrees.