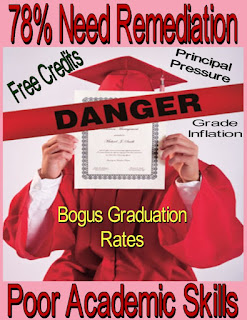 I once wrote about how few students were "college ready" especially in poor and minority communities and was criticized by some for using a metric that really didn't determine the academic abilities of the students and their school.  While they may have a point the reason I used the "college and career readiness"  metric is because it cannot be easily manipulated by school principals unlike the graduation rates and credit accumulation metrics, the hallmark of the Michael Bloomberg era.  It seems now that Mayor Bill de Blasio has replaced Michael Bloomberg as Mayor of the City, the media has decided to question the "credit recovery" and graduation rates as if this was only an issue in the last two years and under Mayor Bill de Blasio.  Be it that it may, academic fraud has been around for the last decade when it came to the New York City high schools.

Its common knowledge that many of the New York City high schools have been using "credit recovery" programs that lacked "rigor" and even real instruction to pass along students and give them easy credits.  In fact, the State was so appalled by the bogus "credit recovery" programs the New York City high schools were using that they forced Chancellor Walcott in 2012 to make significant changes to the "credit recovery" programs and the abuses were to stop.  Remember this outrageous action?  how about this one?  And who can forget this? Of course the DOE looked the other way when schools apparently ignored the new standards. The result was many academically unprepared students were graduated despite not having the skills to succeed in the adult world.

In school after school I hear stories of undeserving students being graduated out by the use of bogus "credit recovery", Principal pressure, grading policy, and manipulating attendance.  Many "Leadership Academy Principals" demand an 85% passing rate, including students on a teacher's roster who refuse to attend class.  When the teacher objects, he or she is refused tenure or is given poor observation grades.  Moreover, attendance figures were manipulated in such a way as to show the student attended class when the student did not.  Finally, many principals require a minimum grade of 55% this ensures that if a student can pass a marking period, they can receive a passing grade for the entire year.  Its a wonder that the New York City High School graduation rate is not higher?

In today's New York Post we find another instance of the DOE looking the other way when it comes to Regents cheating and again Superintendent Amiee Horowitz is linked to having a school's teachers regrade the Regents.  After denying that a school's teachers were regrading the Regents, an email was published showing that at Richmond Hill it directed three teachers do do just that.  The DOE response?  Dead silence.  Is it any wonder that 78.3% of the students who go to CUNY have to take remediation?  What about the students who were pushed through without even the opportunity to develop the academic skills necessary to be productive adults?  To me this is academic fraud and the administrators involved should not only be fired but go to jail.

Academic fraud will continue in the New York City high schools regardless of who is in charge of the New York City schools until more stringent and academically appropriate rules are implemented in the future.

Students are coming into the community colleges unable to do simple arithmetic and with no algebraic skills. Worse still is their lack of understanding about actually doing school work. Many don't buy books or even go use books available in libraries and labs or can be downladed. They wait until the last second and expect extra credit and grade forgiveness. They learned their high school lessons well. Work is not necessary for success. The worst part is there are many of good students at the college too who are not getting the classes they need because so much space and funding is used up by remedial classes.

The best and only way to kill grade fixing is to prosecute ex-Dewey Principal Kathleen Elvin et al. for breaking Education Law 225, Section 225 regarding false grading.

OSI has the proof. So why not arrest her and put her on trial?
That's what they do to cheating educators in Atlanta. Why not here?
Their ed criminals are convicted; ours resign with pensions.
Where's the moral, ethical and legal outrage? Looks like I'll have to make the referral myself to AG Schneiderman.

And let's not forget the DOE's velvet treatment of prodigal principals. Without media pressure Farina would have covered up OSI's report and let Elvin skate. I am told that she has already put in her retirement papers. Now Farina will let the case and the issue die without full accounting. But a criminal trial with proper discovery and/or a Truth Commission to expose corruption high and low inside the DOE would end decades of cover-up .

Again, in light of Atlanta, as well as Farina's sketchy handling of the Dewey mess, how can we miss this big stage opportunity to seriously punish the guilty in management for once and argue that gun-to-the-head accountability, the blessed sacrament of deform, is an invitation to cheat. See Campbell's Law and its Dewey spawn.

Prosecute Elvin, and give the rogues something to fear.

DWARKA HAS PRESSURED TEACHERS TO PASS STUDENTS, CHANGE GRADES. USES APEX AS A SUBSTITUE FOR QUALITY TEACHING. THE DOE INVESTIGATORS KEEP EXONERATING HER OF ANY WRONG DOING. THE STUDENTS AND TEACHERS ARE OUTRAGED OF THE SHAM.

The last day of school all the students were bragging how they got the answers from their phone during bathroom breaks. Maybe that's why DeBlasio allowed cell phones into the schools.

i was on of those skeptics but now realize that the other data in the school snapshots are manipulated by sleazy administrators. While I'm not convinced using the college readiness data is appropriate, I can see why you used it.

These principals seem above the law, Ms. Fariña it is the time for you do your job.

Every high school is scamming. Every single one. Make no mistake about it. Credit recovery is rampid. It's a total JOKE!!!!!!

Actually Chaz, maybe you can post up an "open thread" about any stories of credit recovery, including school and principal name. I have a ton of stories and I'm ready to unload.

To Anonymous 9:35:
Please send your info to nobilep@aol.com
and I'll be happy to convey it to OSI/SCI
under whatever instructions you give.
Somebody has to walk the info in and put
it in their laps. Otherwise, they'll not
notice and look the other way.

If you prefer the Chaz route and Chaz agrees,
I'll walk in whatever is posted.

Nic going. May your tribe increase.

We need an independent commission with executive oversight to clean out the NYC public school system which is corrupt as the day is long!!!

Guess what's going on in summer school. 18 days to get a credit. Some get it for coming in 2 days for "blended learning. That's instead of a 5 month term. And of course some have online classes. WOW.

To catt55:
Please elaborate on chaz or with me.
The whole truth is our best weapon.

What's the UFT have to say about this? I've never heard a word. If there is rampant grade fixing going on, you had better think long and hard about reporting it. Catt55 I can personally guarantee you'll end up in the rubber room looking at a 3020a hearing. While Phil has nobel values, he's not going to be able to support you, your family, and psychiatrist. Phil Nobile!s situation is a best case scenario for anyone who does so.

Philip, this is Anon 9:35. I'm at summer school in a very well known high school. The above poster mentioned it, and NAILED IT. We have classes AND ALSO separate scan sheets for attendance IN THE SAME CLASS AT THE SAME TIME. The kids on the separate scan attendance sheet are doing "blended" learning and will receive a full credit for sitting in a class that is different from the "code" they are "making up". This is heavy. This is a huge story for Susan Edelman or yourself to get to OSI. However sir, don't feel all that comfortable emailing you with traces to myself. Don't need that attached to me. Not afraid to give the info, but not emailing with my name.

I always find it amazing the kids I get in my 9th grade classes who can't read or do basic math (I am a math teacher).
Does everyone graduate from middle school or 8th grade? I know some go for summer but no one gets held back anymore.

Agreed with 10:51. I too have separate scan sheets in the same class at the same time for DIFFERENT classes, how is this going on?

I work in a middle school. Imagine an 8th grader who fails all four core subjects with a 55% during every marking period, and gets a 1 on the NYS ELA and a 1 on the NYS Math exams. The student was also absent 45 days from school.

How does he reach high school? All he is to do is attend 18 days of summer school (this year is 18 days and last year was 19 days!) and fill his portfolios with nonsense. Poof!! Hello high school!! That is why they can barely write an essay or add fractions. Sad. Sad system we work for.

Guys, the DOE is well aware of this practice. It's ok!!!! They OK'd it. Get these bastards out of the damn school by any means. Several scan sheets within the same damn class AT THE SAME DAMN TIME!!!! Where's the UFT? Let the DOE spokesperson, Devora Kaye "comment on this"! She's has automatic replies. Her replies are the same for each situation. Hysterical.

This is a Staten Island summer school. That should make it pretty obvious.

If anybody is willing to tell their story to the press. Please contact Susan Edelman of the New York Post, she is presently trying to gather information and publish an article on the issue of widespread cheating at NYCDOE schools.

Chaz, Have a direct email for her? She doesnt respond when I send via the website.