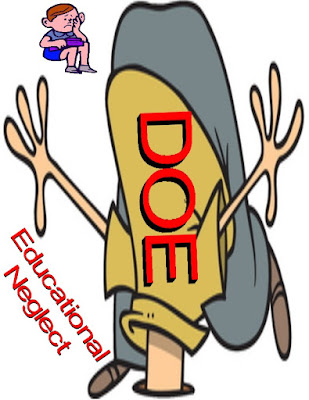 Give the New York Post reporter Susan Edelman credit, she is the only education reporter that does not buy into the education deformer narrative that students don't need more resources and smaller class sizes, just better teachers to eliminate the academic achievement gap.   Susan Eldelman fully understands that its the underhanded, unaccountable, and sleazy DOE bureaucrats at Tweed along with the poor quality of principals they select to run the schools that are a major reason for the educational deficiencies that many public schools experience in New York City and not "ineffective teachers".

In today's article, Susan Edelman wrote about how the administration of Maspeth High School is requiring students, where 69% of their families are considered poor, to buy their English books,  Moreover, the Principal of Maspeth high school is on the "dirty dozen" list of principals that teachers don't trust in Queens.  If that isn't enough, Maspeth High School has the highest percentage of untenured teachers at 83%.  The staff is so young that they must wear name tags to differentiate them from the seniors of the school.  Moreover, I have been told that many of the teachers are forced to do extra unpaid duties at the school and the previous Chapter Leader was discontinued by the Principal when he tried to enforce contract provisions on the administration and protect the staff from arbitrary actions. Read last summer's article on Maspeth by nyc educator.

What has the DOE did about this?  Nothing, absolutely nothing!   Where is OSI or SCI?  Oh, I forgot, its not about teachers but a favored Principal appointed by his Tweed superiors.   Therefore, let's not investigate it or risk having to substantiate the apparently illegal and immoral actions by the school administration. You can see Maspeth High School's latest snapshot Here.

Finally, and quietly, on January 22nd, almost 2 years after being reluctantly removed by Chancellor Carmen Farina, due to pressure by the media, from her position by the DOE ex-Principal Marcella Sills was terminated by her 3020-a arbitrator due to extreme misconduct.  Remember her story when she was Principal at PS 106 in Far Rockaway which was known as "the school of no"?
Posted by Chaz at 10:58 AM

Bronx ATR said...
This comment has been removed by the author.
12:56 PM

What has the DOE did about this? Nothing, absolutely nothing! Where is OSI or SCI? Oh, I forgot, its not about teachers but a favored Principal appointed by his Tweed superiors.