The DOE Finds 36 High Schools Abuse The Credit Recovery Program. Or Did They? 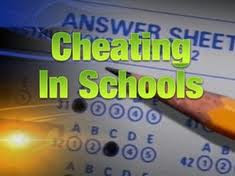 The DOE's task force on cheating quietly found that 36 high schools abused the "credit recovery" programs but in typical DOE fashion, refused to identify any of the 36 high schools and protecting wayward principals from public scrutiny.

Apparently, the DOE wrote a report that identified 36 high schools that inappropriately used the "credit recovery" program and recommended corrective action be taken.  However, the report has not been made public and without a detailed review of the findings there is little way to know if the principals of these 36 schools were found to have inappropriately give out "free credits" or that the abuses were minor and did not significantly affect the credit accumulation of the students involved?

The problem is that the DOE has so far refused to make the anti-cheating task force report available to the media or general public.  Therefore, one must take the report's conclusion with suspicion.  Maybe, if an independent task force had prepared the report, I might believe it.  However, the DOE has time and again found nothing wrong only to find major problems that the DOE ignored.

The Deputy Chancellor claims they were proactive but without a detailed inspection of the report and the data that went into the conclusions, there is no way to determine the accuracy and truthfulness of the conclusions.

If anyone thinks that any of these abuses were minor, come see me, I have some nice clean Flint River water to sell you. Give me an "effing" break. Klein=Walcott=Farina, it's all a giant hoax, and it all has the blessings of Weingarten/Mulgrew.

I, sadly, doubt that Freidrichs will make any difference in the AFT/UFT positions.

With the longer rotation many ATRs are being subjected to humiliating, demeaning activities. I've been asked to file folders, run elevators. All day cafeteria duty, all day hall duty. I went to the chapter leader and was told the school would probably end up reporting me to an ATR supervisor for complaining. I don't want those jerks coming everyday to observe me out of license, with kids I don't know. and then being terminated for not being able to control them. I think there may have been some intelligence behind having weekly rotations, as this stuff didn't happen to me then. I'm tired of being treated like a piece of shit. They just want us to quit. The UFT is doing nothing for ATRs. I plan on doing nothing for them when given the chance.

Old habits die hard with Farina. Remember how she coddled the credit recovery queen at Dewey? And need I remind anybody that she covered up (unsuccessfully)the Cobble Hill Regents tampering slamdunk when she was Region 8 Superintendent/Deputy Chancellor in Klein's DOE 2002-2006?

Chaz, good that you mentioned Mulgrew's silent collaboration with DOE corruption. This would be the perfect time for him to revive his 2013 Truth Commission proposal. As if!

Just a few things to come from US Schools in a country with less than 5% of the World's population. Few countries can boast so much progress from its students. Stick that in your hat you dumb ass "reformies" everyone knows it's all about bull shit and money

The APPR law violates collective bargaining by legislating issues that are within the purview of contract negotiations. The counterparty to our negotiations is the DOE, not the state legislature. We don't have to lobby to fix this law. We just need to challenge it in court. But. the UFT is doing neither (lobbying nor court challenge). So, to my kind, the UFT ain't doing shit.

And Mulgrew saying we need to say what kind of assessment we want to be subject to is bullshit. We want all of this dropped. By negotiating a new "portfolio" option we are just putting a bandaid on a broken evaluation law. Everyone knows it's broken; parents, teachers, and students. Time to stop propping it up. We're going to start looking stupid as parents get frustrated with whatever extra onerous "assessment bandaid" we put in place. It will look like our fault.

What's the point of this ATR bullshit? Put us back in the classroom or buy us out. I'm going to another shithole next week, I just got used to this shithole - the kids know me, the staff knows me - just leave us where we are. What's that bald headed motherf--ker Mulgrew doing? Nothing. He and his super fat clowns are sitting around eating like elephants. You see the size of some of these guys? All they need is some velour track suits and they'd look just like my old buddies in Bensonhurst and the early versions of Al Sharpton.

Dwarka of WC Bryant and her APs are going to be stripped of their jobs and pensions.....just watch!

They are protected, even the Union protects them.

Sorry to burst your bubble, but being stripped of their pensions is HIGHLY unlikely. Here are some facts:
1. You still keep your pension even if you have a criminal conviction
2. only 2 entities are allowed to touch your pension - IRS to claim unpaid taxes , and Family Court to claim unpaid child support.

In conclusion, losing their jobs is HIGHLY likely but they WILL KEEP their pensions.

Agreed 5 06
The ATRs have been at their current schools for many weeks now just getting use to the kids, school, staff, parking procedures and now what happens....the DOE takes us to another school....wow....I really cannot believe Farina continues to implement this Mike Bloomberg torture program. I work as a social worker and have been working with many kids for the past several weeks implementing programs and the like. So what does the DOE do? THey are sending me to ANOTHER school next week to start all over again. WHy?? This system is so dysfunctional it is beyond belief. The notion that they are trying to get rid of the ATRs is bull shit. The notion that the DOE is "concerned" about the social well being of the students is bull shit. The schools have one and two year counselors and social workers who are no nothings and still believe the system runs like they were taught in grad school!! This is a story for television and most people cannot believe this when you tell them what is going on. Get the ATRs in the CLASSROOMS idiots. Stop this ridiculous shit!!!!!! Paying people over one hundred thousand dollars to rotate from school a to school b?? Really?? No wonder we have all these reformies flying over our heads because there are so many jerks in the education field it is quite astonishing. The UFT continues to do nada and more and more I am looking at Freidrichs as maybe a blessing for the ATR crew because this madness must stop.

Dwarka has been changing grades, pressuring teachers to change grades, she had fraudulent recovery credit programs but her passing rates for the regents have plummeted. And the investigators keep exonerating her,