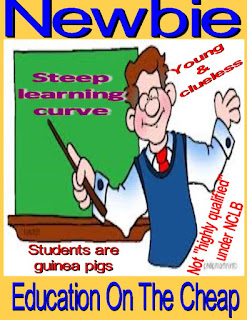 The StudentsFirst organization that was created and once  headed by Michelle Rhee, who's husband was accused of sexually molesting a teenager and is a current subject on HBO's "Real Sports", has decided to go after ATRs by falsely claiming they are "ineffective teachers" forced on schools.  This big lie has been with the StudentsFirst organization for years. Now they have told ill-informed parents that their school woes are caused by ATRs being forced on the schools who must pick up their salaries.  This big lie has apparently deceived the parents that appeared at Tweed to protest the ATRs.

The real truth about the ATRs is that many of them are "quality teachers" who came from the 163 closing schools that Mayor Bloomberg shut down or were accused by a student or administrator and won their 3020-a termination hearing as the DOE failed to prove their charges.  Let's look at why StudentsFirst is wrong and deceived the ill-informed parents who protested at Tweed.

The ATR pool is dominated by veteran teachers, who have more than fifteen years in the system and are usually 50 years of age or older.  These ATRs are near or approaching top pay and schools under tight budgets imposed by "fair student funding" force schools to hire "the cheapest and not the best teachers" for their schools.  The result is a revolving door of "newbie teachers" that allow for high teacher turnover and an unstable school environment. Instead of a "quality teacher" from the ATR pool, the schools are putting inexperienced teachers with poor classroom management skills and that hurts the students.

The way the ATR pool is structured, schools that select an ATR has their salary charged to the school as the average teacher salary of that school.   If the ATR's salary is higher, then the DOE picks up the rest for the year.  If the ATR is appointed, they are free to the school the first year and never exceeds the school's average teacher salary,. Therefore, salary is not the major reason schools are not picking up veteran ATRs.

The reason schools will not select veteran ATRs are two issues.   First, seniority regulations that once an ATR is appointed, they are automatically put into their proper seniority rank and principals are afraid they would be forced to excess a less senior teacher.  Second, veteran ATRs have an institutional memory and principals are uncomfortable with teachers who express and know their contractual rights.  Therefore principals would rather hire a clueless "newbie" and have the students suffer academically then hire an experienced ATR who understands their rights,

The bottom line is that StudentsFirst is continuing the big lie that roving ATRs are "ineffective teacher" when the truth is that its DOE policies that forces principals to hire cheap at the expense of their student academic progress is the reason for having "ineffective teachers"..
Posted by Chaz at 6:58 PM

most of the people that are clueless are the parents themselves. most have no business being parents in the first place and these are former students who had a horrible experience themselves in school just a few years back. the bad experience is most likely due to them being idiots, never picking up a textbook probably vandalizing the schools, cutting classes and cursing the educators. now they struggle to make ends meet and have to blame something for this predicament.

8:44,
Those protesting parents care about their kids, have been mislead and used. Many ATRs are being forced placed provisionally in schools with vacancies that haven't been filled. Those are the worst schools. They see all those ATRs who have been labeled as subpar in the most challenging schools ( with the neediest populations) and wonder, why (if the ATRs are so awful) are they being sent to those schools. It's a logical question. They want to see the demographics for ATRs. Only problem is those provisionally place ATRs are no longer considered ATRs - so the FOIL request will probably only get them the info on those who haven't been placed, Half the real number. The UFT needs to publically clarify that we are teachers in good standing. The UFT needs to renegotiate the ATR agreement, that ends in June, openly and with input from ATRs.

If the UFT arranged to place all ATRs, scores of them would retire the next day. Hundreds of others would be distraught.Many are quality teachers but an equal number are absolute bottom feeders.

Anon 11:19,
The same characterization can be made about all teachers and indeed most professions. ATRs are being forced placed, probably about 50% of them this year. They are however in spite of their experience and tenure, temporarily placed (to be thrown back into the pool in September and placed again) with all the ATR contractual discrimination and the ridiculous voodoo teacher evaluations. In other words, with all the disadvantages of both categories, with none of the advantages of either.

Gatinvisible said...
This comment has been removed by the author.
3:33 AM

ATRs united can be a force to be reckoned with...