Why Is Mikey Mulgrew Lying About ATRs Getting Positions? 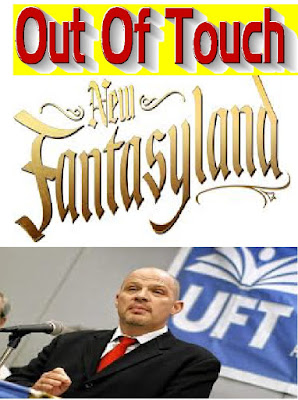 Last week UFT President Michael (don't call me Mikey) Mulgrew told a Queens Parent Advisory Board that the good teachers who end up in excess are snapped up by schools who need their expertise.  Really?  What fantasy world is Mr. Mulgrew living in?  He knows very well that under "fair student funding" which is school-based, most principals would be committing fiscal  suicide if they hire an highly experienced teacher to an appointed position.  In fact its in the principal's best interest for budget purposes to hire "the cheapest teachers for their school".  Below is the actual lying statement that Mikey Mulgrew told the audience.


In response to a parent’s question on reassigning teachers who have been declared excess at their own schools, Mulgrew said most good ones are snapped up quickly — when the bureaucracy allows.

“If you have a school for the arts and a good teacher in the arts has been excessed, do I need to tell you what to do?” he asked.  The entire article is Here.

In the fantasy world of Mikey Mulgrew and his disconnected union leadership would have the uninformed believe that many excessed veteran teachers who are "quality teachers" can get a permanent job if they want one when the actual truth is far different. The Open Market Transfer System is a sick joke for veteran teachers as few ever get an interview, least not an appointed position.  Moreover, both the DOE and UFT refuse to break down the ATR pool by salary, experience, and age since they know full well they discriminate against veteran teachers who are the vast majority of the ATR pool.

Mikey Mulgrew can lie all he wants but the truth is that he and his disconnected union leadership flunkies care little about ATRs as they have agreed to continue to extend the ATR agreement another two years that make ATRs second class citizens and look the other way when the DOE send field supervisors out to "U" rate  and attempt to terminate teachers in rotation.

While Mikey Mulgrew lives in a fantasy land and continues his "love affair" with the Chancellor, his members continue to suffer from DOE disrespect, and especially his most vulnerable members, the ATRs.

Mulgrew can do whatever he wants and he knows it. Despite his horrible track record of doing anything positive for teachers, he won the election by a landslide anyway. Most teachers couldn't be bothered to spend the one minute it takes to vote.

Also, I found this comment interesting:
"He would like to see a student teacher work in a school for 18 months before achieving full certification; a stronger interview process and possibly psychological screening."

Is he trying to convince people to NOT be teachers? Student teachers do not get paid (in fact, they pay the university the privilege of student teaching in one the lovely nyc public schools), and he wants them to work for a year and a half for free? Maybe he's onto something: If you expose people to the environment long enough they will realize they should change their career path before they even start it.

Chaz, keep up the effort on exposing corruption in our union. Mulgrew does not less about ATR's and working conditions in general. The only way to negate this would be to keep up the pressure on this blog and others.

An assistant school principal slashed a man who was sitting in a car on a Staten Island street, police sources said Sunday.

Vincent Scotto, 43, was charged with assault and criminal possession of a weapon after slashing the other man in Great Kills during a dispute at about noon Saturday, police said.

The Department of Education employee reached in the 59-year-old man’s side window and slashed his left arm with a razor blade in front of 150 Greaves Ave., the sources said.

It wasn’t clear what the men were fighting about.

There's a massive NYC teacher shortage right around the corner. It's all Abraham Lincoln's fault - he freed the slaves. Only thing is no one told the DOE or UFT.

Ask James Eterno if good teachers can get jobs. You are the one who is out of touch.

Don't you believe that the DOE and UFT should publish the statistics by age, experience, and salary in the ATR pool?

James has not been appointed , but continues to fight the good fight. He is a spectacularly qualified teacher, that will be excessed in June.

Taken from a recent Chalkbeat story about our recent election:

"Just 17 percent of active members — educators who are currently working in schools and with city students — actually voted, a turnout that dismayed some who want to see changes in the union and the school system."

Why did 83% of the active teachers fail to take the five minutes to put an "X" in a box, seal a few envelopes, and place in the mail (free postage, too)?

There's plenty of spectacularly qualified teachers in the ATR pool. Not to diminish James' worth or anyone else's. The ones who have been provisionally placed are currently receiving their excess notices. This is a disgrace, especially for those who have knocked themselves out all year long hoping to be permanently hired.

Here are some numbers we received from a FOIL request. http://www.uftsolidarity.org/standing-in-solidarity-with-atrs/

Budget office tells principals who want to hire an ATR. "No!"