Why Is Juan Mendez Still A Superintendent? 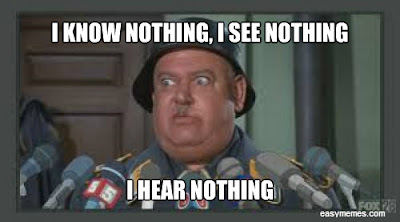 When you look back at Juan Mendez's career as Principal at EBT you can only shake your head and wonder how he was promoted to be a Superintendent?  He was accused of changing grades to artificially increase the graduation rate, sexually harassing a male colleague, and placing uncertified teachers in his classrooms.  Read the comments about Juan Mendez Here.  Moreover, Superintendent Mendez bypassed the C-30 committee and appointed the infamous Judy Henry as Principal of Queens Gateway to Health Sciences, despite her coming in fourth out of five candidates at the committee interview process.  It seemed Judy Henry used Juan Mendez as a professional reference in what appears to be a conflict of interest.  You can read the article Here.  Finally, Superintendent Mendez is now subject to a federal lawsuit by the US Attorney for his failure to take action against a Principal, Minerva Zanca of Pan American International High School, based upon a racial discrimination complaint. You can read the various aspects of this case in the following blogs and media outlets.  NYC Public School Parents, Ed Note Online, Perdidio Street School, and the NY Times. For more information on Principal Minera Zanca, you can read my blog Here.

Under Superintendent Juan Mendez he has some of the worst principals in Queens working for him and how he protected them, no matter what the allegations.  Here is the list. One can only question how Chancellor Carmen Farina kept Juan Mendez in charge.  The answer is simple of course since Chancellor Carmen Farina is part of the problem and not the solution when it comes to running the New York City Public Schools. Why is Juan Mendez still a Superintendent?  Maybe the question is why was he ever given a Superintendent's position in the first place?

Is Juan Mendez worse than Amy Horowitz?? Perhaps the DOE should have a new metric the race to the bottom!!

Juan Mendez appointed several Assistant Principals in at least 2 Queens High School without going through the C30 process Ghandi Moussa and his friend Luis Santiago. Santiago was appointed after spending time in the rubber room.

A relative of mine worked at EBT when Mendez was an A.P. She used to say he was an idiot who didn't know what he was doing. Fast forward. Mendez used to come to our school all the time. He is a big imposing man and seemed to use this to give an air of authority, but in his addresses to the teachers he seemed like a stuffed suit. He is buddy buddy with Zanca, a fellow latino. It seems we have third world style corruption in America now. So sad.

Farina says most ATRs are incompetent and only about 400 of them know how to teach. She also said that about 400 principals should not be leading schools. ATRs are being terminated, but these principals are still reeking havoc on their staff and untold harm on their students. Farina needs to be replaced with the same age discrimination she is purging the ATR pool with. She, Mulgrew and DeBlasio are complete hypocrites.

A whole post about bad administrators and not one word about WC Bryant, and the supremely talented and lovely Ms Dwarka. She must be slipping.

Mendez is a piece of $hit

Juan Mendez is an exemplar of the racist culture of the DOE. So is Carmen Farina and the rest of the Superintents. The DOE has a race problem. It is a big race problem. It is an epidemic race problem that is at the rotten core of the most segregated incompetently managed urban school district. The Federal Prosecuters must delve muchore deeply into this civil rights matter.

To 7:48. The truth that most liberal whites do not want to admit or accept is that other races look after their own first. End of story. I have seen latinos closing ranks to discriminate against whites and blacks, blacks discriminating openly against Asians, etc. No one does anything.

All Juan Mendez can do is talk about himself. He is an embarrassment to the field of education.

Juan Mendez runs his district like a Mafia and feels protected by ADASA among other organizations. Lets face it this man is protected by other corrupt educators. It is sad.

Anonymous 7:48 pm- Our school system has a racist culture. The wife of Juan Mendez has also been getting away with similar accusations. Arlene ubieta at stuyvesant high school should also be investigated.

The membership has voted to continue this practice. District 10 has the same exact tactics in play.

Thanks so much for posting the atrocities of Juan Mendez. Check out Allison Persad - a bff of Juan Mendez. She is so unqualified and was appointed principal of a small all-girls' school in Astoria. This is actually a district 30 school but somehow he is the superintendent. Please update your worst principals' list. When you look at her scores of being trustworthy you may, or may not be, shocked. The parents cannot pull their children out fast enough

Juan Mendez is being pushed out this year. Things have caught up to him. He is also upset at the chancellor for not selecting him to executive superintendent and speaks ill of him every chance he gets. This is great news for the Department of Education, Juan Mendez is being retired. This man has caused great damage on the DOE.

Juan Mendez has always bypassed the C30 process. He works in close connections with his friends. Take for example Kristen Breen who was not fit to be principal of a high school in Queens but was still assigned. There are no policies in place against this – and it needs to change.

Let's not forget about the mendacious, unintelligent and incompetent narcissist Ana De Jesus, another one of his ADASA cronies. Mendez bypassed the C30 process and put her as principal of one of the best schools in the city, which she has been destroying ever since. It's a specialized high school for math and science, yet she has no background in them. Her trust track record on the learning environment survey at both her current and former school are atrocious. Let's hope the UFT can grow a spine and go after these tyrannical principals once Mendez is no longer around to protect them.

The only person more horrible than Juan Mendez is Marie Prendergast, who has had her wrongdoings splashed all over the newspapers but remains a principal. I'd love to see her get what she deserves.