Labor Day And Our Union Leadership 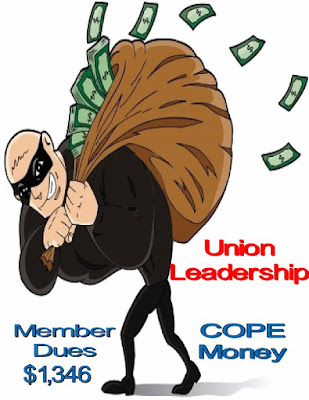 Today is Labor Day.  A day that celebrates workers throughout the nation. It is also a day when unions bring out their members to parade on the main streets of cities to show their pride.  However, when it comes to our union, the United Federation of Teachers, its not about worker rights its more about how much money the union leadership can get from the members, be it dues or COPE.  The union forces each member to fork over $1,346 annually and allow little or no input in the union's decision making process.

Our disconnected union leadership has allowed for a group of educators to be glorified substitute teachers, moving from school to school like gypsies (ATRs), the only union that allowed this to happen to their members in the City.   Furthermore, they support policies like Common Core, high  stakes testing, the Charlotte Dainelson rubric, and junk science, despite the majority of teachers opposing these destructive policies.  Finally, they negotiated inferior contracts that resulted in massive "givebacks" like the 2005 contract and inferior raises to curry favor with the Mayor and Chancellor (the 2014 contract).

The result is that we have a union leadership that is more interested in political power and control than representing their members and on this Labor Day its time for our members understand that our union leadership is not about representing their members but serving their own self-interest. Maybe one day we will get a real leader who will champion member rights and when that happens I will be proud to march alongside my union in support of worker rights.
Posted by Chaz at 9:56 AM

Do not forget the bullying the union allows with ATR's and their field supervisors. Then they screw the members out of retroactive pay and claim to be fighting for workers. This union is so corrupt and un ethical it is sad.

Why isn't there monthly ATR meetings with the UFT to address our concerns? Shouldn't ATRs be notified of all major changes, i.e. end of ATR agreement, rotation changes, new rules, etc.? I hope the NY Post wins their lawsuit for the FOIL requests, including demographics on ATRs. The UFT knows this is discrimination. Last time I was at one of the UFT meetings Amy feigned surprise that almost everyone there was over 50 years old.

Don't forget how many teachers lost their retro pay because they died, were discontinued, resigned, or were terminated.

Watch out for ATR supervisor Justin Stark this year, he's sharpening his hatchet.

Hard to believe fact about UFT sleaze: if a District Rep assaults a teacher on school grounds, the teacher will never learn what happened to the rogue Rep. The DOE will defer discipline to UFT and the UFT won't disclose the consequence to the teacher/victim. How do I know? Because former Brooklyn DR Tom Bennett assaulted me at the School for Legal Studies in 2013 and secretly walked despite OSI's substantiation.

Herewith the my appeal to UFT General Counsel Adam Ross and his subsequent brushoff:

On June 12, 2015 I wrote Ross: "According to [former DOE General Counsel] C. Jackson-Chase, she sent you the findings of OSI Case #02687 regarding my complaint against Tom Bennett.

As the complainant/victim of Tom's freakout, for which neither he nor Mulgrew has had the courtesy to apologize, I am owed the details of the findings that were substantiated by OSI Deputy Director Chris Dalton.

Please forward me the findings and inform me how the UFT dealt with them. Specifically, I want to know whether Tom expressed remorse and what punishment, if any, he received. Unless, apparently, it is UFT policy to keep victims of DR derangements in the dark."

On June 26, 2015 Ross replied: "As Mr. Barr informed you on March 22, 2013, we have reviewed the matter and taken appropriate action. We consider this matter closed."