The ATR Field Assassins Are Coming! 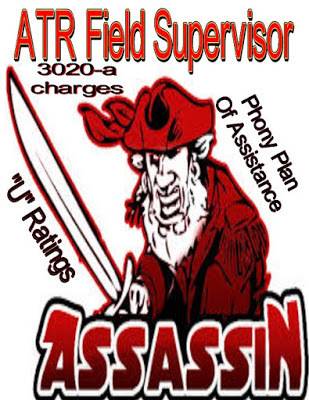 A new start of the school year and very little has changed.  Only a handful of ineffective or vindictive  principals have been removed, the punitive Charlotte Danielson rubric is still in force, "junk science" is still used to evaluate teachers, and fair student funding continues. In other words the Bloomberg education policies remain largely undisturbed under Mayor Bill de Blasio. While the terrible 2014 ATR agreement sunsetted, there are still over a thousand ATRs without a classroom (1,162) and the field supervisors are coming to "U" rate them if they can.


The field supervisors (assassins) are now introducing themselves to the ATRs in rotation and they will tell you that they are there to assist you in improving your teaching and getting a permanent position.   Unfortunately,  the field assassins are not telling the ATRs the truth.  The field assassins are there to thin the ATR herd.  Their job is to “U” rate as many ATRs that they can and force the ATRs to either resign or retire rather than face 3020-a termination charges.  In fact, the section dealing with field assassins responsibilities were changed from supporting the ATR‘s pedagogy to recommending to the Superintendent 3020-a termination charges.

According to one informal source 120 ATRs were charged under section 3020-a in the last year, mainly by field assassins “U” rating them.  How accurate the number is I don’t know but certainly even one ATR who was terminated, based on a field supervisor recommendation is one too many. While the union did the right thing and allowed the terrible 2014 ATR agreement to sunset, due to an overzealous DOE prosecution of the ATRs, the union needs to go much further and challenge the DOE’s use of field supervisions at PERB or by filing a lawsuit.  How unfair is it to observe a teacher in a classroom of strangers, with no ownership of their grades, and no idea how much rigor to put into a lesson since the ATR has no idea of the students’ academic ability?  Yet our disconnected union leadership ignores the issue and allows the DOE to run roughshod over the hapless ATR.

My advice to the ATRs in rotation when the field assassin shows up with a smiling face and promises to assist you in getting a permanent position, remember the saying “Beware of the Greeks bearing gifts”.  In this case the gift can be termination.

Finally, in the last DOE/UFT ATR committee there was no consensus on changing the ATR agreement.  Therefore, the 2011 ATR agreement is now in force, except it will be a monthly and not weekly rotation..

This is not what Amy Arundel told us last year. She said that ATRs are only being rated unsatisfactory for time and attendance. Shouldn't she be giving her dog and pony show soon? Why is there such a disconnect between what the UFT says and reality? If cornered it's an urban myth or you're lucky to have a job. Hey I pay dues just like all the other poor schmucks that belong to the UFT. Shouldn't we have some rights? At least Arundel should tell us the truth and stop treating us brain damaged zombies.

I love being an ATR AP.I get paid 120k to make sure kids are quiet between periods. Oh baby.....this is sweeeeeeeeeeet!!!

Yes, for ATR AP supervisors it's better to be a hammer than a nail.

You're not an ATR AP, get a life. The joke is played out.

Dwarka Dwarka is a laughing stock to the higher ups. They know she's a twit, but love how sick she is mentally. She is one sad lady. No surprise that she's all alone an her husband left her. The pebbles on the street are more valuable than that $kank!

How can you live with yourself?

Namita Dwarka from Bryant HS may be a twit, but she's very good at destroying careers.

Your posts are always interesting and informative. Great job. But as a former English teacher who remembers you from Jamaica HS, I must correct one small error. The expression you meant to write is "run roughshod" not rough shot.
I see too many mistakes in published materials, including the New York Times.
Thank you.

The lonely troll got exposed on the last Chaz post pretending to be a teacher (who did not work summers and did work summers at the same time LOL). Now he is a pretend AP ATR. Still in mom's basement of course.

Thanks for the correction.

Stark, Mendez, Quail and others are hungry for old blood.

what boroughs are mendez and quail from?


Justin Stark is such a miserable piece of pig shit. Hey Justin, were your parents first cousins?

She is above the law, she will probably be chancellor.

UFT thinks that the field supervisors are doing a good job by getting rid of teachers.

She is a princess, and she is a godess.

Be aware of field supervisors thirsty of old blood, and willing to use amy little reason to rate am ATR U.

Thanks, Chaz for your post. Without it we ATRs get no real information

Amy Arundel is in cahoots with the DOE to get rid of teachers.

Veteran teachers and ATRs are being harassed through 3020A hearings to retire or resign. Most of the time these charges are only an excuse to push older teachers out. Most of the time these charges do violate tenure rights by not being voted in Executive Session of the PEP (Article 2A of Education Law 3020A). Only the PEP can determine probable cause. The UFT, and NYSUT will look the other way, and will blame each other. They are openly pushing experienced teachers out the system with the compliance of the UFT, and by violating our due process. This has all been planned for a long time by relaxing the rules, and making it easier for supervisors to abuse the system. Remember the UFT negotiated in a secret deal to have ATRs observed without having any assigned classes in 2014. Now even a roving ATR Field Supervisor can recommend termination since 2016. This is not a fair game anymore. They can start targeting anyone with no consequences if they are acting in bad faith. They will target anyone outspoken first, and they will go after you until they finish the job. The observation process is being manipulated in a way that a good lesson can turn into a bad one because the UFT will not challenge unfairness, further more they are not following on legitimate grievances. It is shameful to see so many teachers in their 50s, and 60s in the rubber room. All this is happening while they hire less qualified, and inexperienced teachers because of Fair Student Funding agreed by the UFT in 2007. It is just a matter of time before they will start targeting you. It is open season, and these supervisors have a blank check to go after ATRs. Once they start targeting you they will continue, and it does not matter if you had 20 years or more of satisfactory service. Even the arbitrator will be pressured to rule for your termination because the DOE will not hired him back.

Our Union is a complete disgrace for allowing its more experienced teachers to be targeted because they became expensive. These field supervisors are only there to harass us, and rate older teschers U.