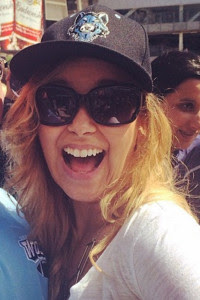 One of the most glaring issues dealing with the DOE is the "double standard" when disciplining teachers and administrators.  Teachers who commit or allegedly committed minor infractions can and usually are removed from the school and subject to 3020-a termination charges.  By contrast, school administrators are presumed to be innocent and few are removed from their school.  A case in point is the story of 33 year old Assistant Principal Diana Rendon of Progressive High School for Professional Careers in Brooklyn, who was first caught on a cellphone apparently boozing it up on a hotel bed with some of her teachers at taxpayers expense and now she has been accused of barging into a boys locker room with some of the boys still in their underwear.

Can you imagine if a male coach walks into a girls locker room with half-dressed girls?  That coach would be immediately removed from the school, be subject to an SCI investigation, and quite likely suspended without pay for sexual misconduct and terminated.in a 3020-a hearing. Yet Ms. Rendon is still an administrator in the school.  As a coach of a girls soccer team, I knew better if I wanted to keep my job and always had a female team captain handle the locker room and only came in when she gave me the go-ahead to enter.  Yet, apparently Ms. Rendon rather than follow the rules, believes she can do as she pleases and barge in for any reason whatsoever.

If that is not enough, how about the free baseball tickets that she and the Principal were supposed to give to the students but went to staff instead?  This stuff apparently goes back to 2010.

What we have here is apparently another case of DOE's different criteria when disciplining teachers and administrators, or the old "double standard".

If you are reading this with skepticism, that's cool, you should always read that way, when you read someone's opinion. Which is what a blog tends to be. However, if you are skeptical of this opinion, then I suggest you read into the history of the principal at John Bowne High School, and you will be skeptical, no more.

A principal could eviscerate a teacher with a plastic butter knife and nothing would be done. If the same said principal spends $5 of DOE money on anything that remotely looks frivolous or self serving, that principal will be skinned with the same utensil. Between all the egregious actions of these out of control principals, there's simply too much and too many to go after. If you see a principal spending money on crazy stuff - big screen TVs and hot tubs for their restrooms, report it.

My former principal had a civil suit brought against her (suit was documented in the NY Post). Wanna know how it turned out? They brought 3020-A charges against me and I was terminated. But it ain't over til it's over.

Consider the following grotesque double standard at the top of the DOE and SCI involving Chancellor Carmen Farina and Special Commissioner of Investigation Richard Condon. The beauty of this example is that the evidence is found in Condon's own corrupt, self-incriminating report on the Cobble Hill Regents case. (June 26, 2007) Read on and weep:

"In July 2005, a confidential source contacted SCI and raised issues about a high level cover-up regarding Regents exams tampering at Cobble Hill which OSI had investigated." (p. 4)

(Since OSI had already substantiated my cover-up allegations against Cobble Hill Principal Lennel George and Local Instructional Superintendent Kathy Pelles in its May 25 report, the Condon's reference to "a high-level cover-up" could only point to Region 8 Superintendent Farina and her successor Marcia Lyles to whom LIS Pelles reported.)

"... in April 2004, the NYSED sent a letter to Region 8 directing that an investigation of Nobile’s allegations concerning the June 2003 Regents examinations be undertaken. ... The Region did not refer the NYSED letter to this office."
(p. 3)

(Thus in Condon's plain yet purposely cryptic expression--"The Region did not refer the NYSED letter to this office".--he clearly accused Region 8 officials of cover-up. N.B.: NYSED devastated any pretense that Regents tampering did not occur at Cobble Hill, declaring that AP Theresa Capra's June 2003 Social Studies scores went "beyond any dispersion, magnitude or directionality that is likely to be attributable to chance." Extending Capra's and the Region's crimes, Condon did not quote a word from NYSED's case-closing statistical audit.)

"The SCI investigation found no evidence of a cover-up by Region 8 officials, specifically Lyles and Farina." (p. 62)

Isn't it time for Farina to retire? Let her go back to Florida and enjoy herself, instead of doing all this constant sweeping of aberrant behavior under the rug. She needs to sweep these fools, like the ones you've described, out the door. The schools are in the worst state I've ever seen them.

What about Ms. DWARKA?

Hold on Chaz!!!!! The AP was on a retreat or whatever the hell you want to call it and she was drinking in a room with co-workers? This is not right? What's wrong with this Chaz? People can't drink now? This is ridiculous. While I can't stand administrators who think they're on a higher level than teachers and don't mingle, I have to say I'd love to work for this AP who clearly was having fun with her stuff. Who cares that she was drinking or drunk or anything. This was a private hotel room with no students. Who cares how it was paid for. What does it mean that it was taxpayers money? Do you know how many hundreds of millions of taxpayer money goes to consultants who never taught before? This is a LAME story. Congrats to this AP for having fun. I bet she has created a wonderful morale at her school where the teachers are having a blast while educating, wanting to actually be at work, unlike 99% of teachers reading this blog.

Farina should leave, and all those bad pricipals.

Really? You find her behavior acceptable? Well it takes all kinds I guess.

There are rules for principals and rules for teachers. This is why people like Jose Cruz and Anne Geiger still have jobs ramming their respective schools into the ground and ruining as many teacher's careers as they can,

Betsy devos goes on trial today in front of our esteemed congressional politicians. My prediction is she will not get the nod or if she does she will not last the term ala kathy black.. because Trump does not want to deal with the fact that Betsy Devos is a no nothing bozo who thinks she knows education because she has the dollars. People we are living in a troubled country now that the stats came out today revealing that our one percent billionaires now have more wealth than just about half of the entire world population. The US has let these bloombergs of the world accumulate massive wealth due to globalization and now the billionaires are taking over politics influencing elections all over the country and taking over our government in a coup. Devos is a complete sham who has single handily destroyed the schools in the once great state of Michigan...take a look at Detroit or nearby cities and look at the school records which reveal the lowest performing charters in the country!!!!!! GO get em Chaz eat em up for breakfast bud

You condone her barging into a boys locker room uninvited as right? How about giving baseball tickets to favored staff that was to go to students? Why is there such a high teacher turnover at the school?

Chaz is correct. Your moral compass is out of wack.

The post of all places calls administrators out on their bullshit yet our union nor the doe will lift a finger! Ridiculous and shameful. Get this awful person out of the DOE only a matter of time before a more disturbing incident happens.

Actually, Ms Rendon is part of the reason why there is a high turn over of teachers in that school. Also, why do you say "who cares which funds they used" when in fact the whole issue, legally and morally, revolved around the fact that it was taxpayers money that was used. This retreats at Progress High School are NOT reserved for all the teachers, as a former employee of that school I can tell you that only a selected few are invited and the stuff that goes on goes far beyond moral. You said you can't stand APs who think they are above everyone else and don't mingle ? This is a perfect example of one that doesn't.