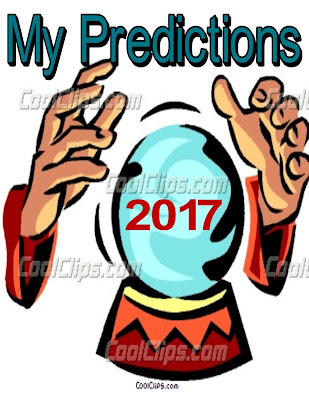 UFT Leadership:
Look for the UFT leadership to continue to make nice with the DOE at the expense of the members as they refuse to go after vindictive principals, allow the DOE to pursue their "gotcha agenda" on going after veteran teachers. and to continue the oppressive Danielson rubric while allowing four or more observations when most school districts are requiring only two.  Moreover, our disconnected union leadership not only does not support the "opt out" movement but falsely claims that it could cost the schools federal funding.  Finally, the UFT leadership allows the ATR situation to continue and refuses to oppose school-based  "fair student funding" that forces principals to hire the "cheapest and not the best teachers" for their schools.

Instead, look for our union leadership to campaign for increased COPE payments by claiming to fight the upcoming constitutional convention and the incoming Republican administration when the COPE money will probably be used for other issues that are not supported by the members.  Remember this?

DOE:
I  expect little change in the DOE as much of Mayor Bloomberg's managers still retain their policy-making positions at Tweed.  Until the disappointing Chancellor, Carmen Farina finally retires or is replaced, the DOE will remain the enemy of the classroom teacher.. Collaboration is discouraged and top down management is the mantra when it comes to the bloated DOE as they push their pet programs while ignoring academic fraud, support vindictive principals, and are tone deaf to parent complaints.


School Integration:
Look for this to be a total failure unless the City can bring back community high schools and integrate the neighborhoods.  Maybe in isolated elementary schools some limited integration can be achieved but at the high school level with complete choice, integration is a pipe dream.


Renewal Schools:
I predict that most of these struggling schools will continue to flounder unless the schools can attract a better educated student body (unlikely) and an experienced teaching staff (highly unlikely).  Most of the Renewal schools have "newbie" staff and are struggling to meet even the modest goals
assigned to them.

Teacher Shortage:
The teacher shortage that has hit the Bronx schools will become more prevalent and spread to the other boroughs, except for Staten Island.  Yet the DOE, for ideological reasons, will continue to keep ATRs who won their 3020-a hearings in limbo by refusing schools who would like to hire them.  The DOE will probably allow schools to hire uncertified teachers rather than do what's right for the students.

ATRs:
Few minor changes, like another failed incentive and maybe a little more flexibility for high school ATRs so that they are rotated Region wide and not Borough wide (probably wishful thinking).  Otherwise, I see little real change. Hopefully, the opposition caucuses of MORE and New Action will continue to put pressure on the UFT Leadership on the executive board to advocate for ATR since the Unity caucus does not..

Bill de Blasio:
Look for the UFT leadership to endorse Mayor Bill de Blasio by the Spring, without asking for member input. Will it lead to a new contract down the road?  Maybe, maybe not but the union leadership will endorse the Mayor anyway while ignoring the hostile classroom environment and punitive evaluations that make teaching a stressful occupation where the majority will never be vested for a  pension..


Conclusion:
While outside issues such as the Supreme Court, the new Secretary oi Education, and the new President (Donald Trump is his name UFT leadership) will affect the education landscape, the issues directly affecting New York City public schools will remain largely unchanged with large class sizes, tight school budgets, and poor quality administrators will continue,  As the members continually see their autonomy erode our disconnected union leadership will claim victory when negotiating with the City and the DOE.
Posted by Chaz at 12:03 AM

It would be great if Mulgrew did the right thing and ask for Farina's retirement as a prerequisite for the UFT's endorsement. She is not much different than Joel Klein. All his people are still in charge. If Mulgrew won't do that then DeBlasio should demand that Farina remove the 400 principals she said have no business leading schools. If you make a statement like that and leave them, how is she an adequate chancellor? It's not their union's strength, make them ATRs.

I predict we'll see a ratcheting back of Federal initiatives (NCLB, CC, incentives, etc) harming the public schools and some incremental (and symbolic) action on charters/vouchers, etc. Overall a plus rather than the minus we saw under Obama/Duncan/King.

One question: Why would de Blasio agree to a contract in 2017 when the current one doesn't expire until almost the end of 2018? No way he gives an early contract in an election year. More likely he goes after teachers to make himself look like someone who will stand up to the unions. Sadly, we are an easy target.

My prediction for 2017: NYC will see the biggest teacher shortage since the mid 1990's.

Happy New Year Chaz , thanks for all you do . Truly appreciate it . Question Can you gather the numbers to our Incoming teacher shortage? . Or predictions in the next couple of years . I was looking at the numbers and In 2020 it's looks bleak .

They are using the same failed policies, they are going to create a shortage.

The police union will score huge. They are without a contract since 2012. Watch the love they get (and rightfully so). I'm curious to see if their union negotiates a contract with retro pay ending in 2020. LOL

It is time to put an end to age discrimination. The ATR pool is a dumping ground for the experienced teachers, while they hire new teachers.

I wish you would predict a buyout so I could retire and leave this godforsaken profession. I'm tired of the stress, the ever increasing workload- it's sucking the life out of me.

Just remember it's all meaningless except for the check.

There are rumblings from the inside that the UFT is telling De Blasio that the endorsement is contingent on Farina retiring but don't expect much better. On the other hand this might only be a red herring to gain support from the members who hate Farina.

The dirty big secret of the DOE and UFT--promiscuous criminal false grading and cover-up all the way to the top, abetted by unethical school lawyers and cops, and sad to say,the absence of whistleblowers in our ranks--will remain dirty and secret.

In retrospect, i definitely should've taken the sanitation gig 12 years ago. My bad.

I heard the superintendent of District 14 was interested. But she's Bipolar, unmedicated so not likely to be selected.

Bipolar and unmedicated seems to be a prerequisite for an upper level job in the DOE- administrators and Chancellors alike.

They keep up covering corruption, but it will start blowing up on their faces. We know that the UFT is siding with bad principals.

All that means is she's planning on retiring. The UFT will make believe it was a quid pro quo. Mulgrew knows how to play teachers.

It does not matter who the superintendent is. The beatings will continue.

This one is a screw ball.

More info on Dwarka, please. I'm stuck here at Bryant hs for....eternity. She is the Capt. Queege of the NYCDOE.

She likes to get rid of good experienced teachers, so she makes a list of people she wants to target.

All these flyby observations are geared to discriminate and push out the system of experienced teachers. This is plain and systemic age discrimination.

Chaz please update your prediction to include the following: "There is a new case that is fast tracking its way through the federal courts to overturn the Abood precedent that allows automatic dues check off for public sector workers. It is called Janus vs AFSCME."

If you thought the Vergara case is dead, think again because Scalia's ghost will be involved in the decision to destroy teachers' unions.
http://iceuftblog.blogspot.com/2017/01/friedrichs-sequel-fast-tracking-to-us.html?m=1

It is time to put an end to the charade.